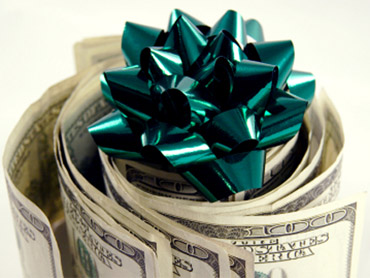 The rich treated themselves like royalty this holiday season. That spun the holidays into gold for Tiffany & Co. and other high-end retailers.

Wealthier shoppers traded up to more expensive gold and diamond jewelry from silver charms. Designer clothing and purses were back.

The splurges are good news for the economy, because the richest 5 percent of Americans, those making at least $207,000 annually, account for about 14 percent of all spending. And consumer spending makes up about 70 percent of the economy.

They weren't just buying gifts well, not just for others.

Ariane Sommer, 33, a model and author from Los Angeles, bought herself a $3,000 diamond ring at the pricey Italian jeweler Damiani in December.

The splurges reached a head the week before Christmas. Average daily spending reported by upper-income shoppers rose 45 percent to $183 during the week ending Dec. 26, according to a Gallup Poll. For all shoppers, the figure rose only 18 percent to $85 that week.

Six months ago, wealthy Americans got spooked by a stock market slide and cut back spending. Now, they are trading back up to higher-status brands as the stock market bounces back. The rich in booming Asian economies, especially, are ramping up spending.

On Tuesday, Tiffany & Co. raised its profit outlook for the year because of better-than-expected holiday sales, and noted particular strength in more expensive fine jewelry and diamond rings. Silver jewelry, which had propped up Tiffany's business when its customers hit the brakes on spending in the recession, was weaker.

Revenue at stores open at least a year rose 7 percent in the U.S. in November and December and was even stronger in Asia, rising 15 percent. That's a key measure of a retailer's health because it excludes the effects of stores that open or close during the year.

Among retailers at all price ranges, sales gains were solid but less spectacular, averaging 3.8 percent for November and December, according to the International Council of Shopping Centers.

Luxury spending still isn't quite back to the heights seen before the recession, but it spiked 8.5 percent Nov. 28-Jan. 1 over the same period last year, according to MasterCard Advisors' SpendingPulse. For jewelry, the rise was 10.4 percent.

The Dow Jones Industrial Average has risen 19 percent since the beginning of July. That and the return of bonuses on Wall Street and elsewhere have helped the wealthy feel better about more conspicuous consumption, said John Lonski, chief economist of Moody's Capital Markets Research Group.

"Financially speaking, wealthy Americans much better withstood the latest downturn than have lower-income Americans," he said. "There was a drop-off there for a while, but it seems as though they've rebounded quite nicely."