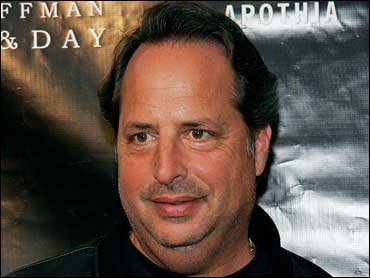 In an interview with Dennis Miller on Tuesday, comedian Jon Lovitz explained that Andy Dick's constant complaining about his arrival on "Newsradio" led to an argument during which Lovitz accused Dick of contributing to the death of Phil Hartman.

Lovitz had joined the show, of which Dick was a co-star, after his friend Hartman was shot and killed by Hartman's wife, Brynn.

"[Andy] was just complaining and really giving me a hard time for no reason. Phil told me that they had a Christmas party and Andy was doing cocaine and he gave it to Phil's wife Brynn, who had been sober for 10 years. So Andy said to me, 'Well, you shouldn't be here,' and I said, 'Well, I wouldn't be here if you hadn't given Brynn coke in the first place.'"

Eventually, the two worked out their differences, or so Lovitz thought.

"Later on we made up, and I said 'I'm sorry I said that,'" Lovitz said. "I realized it really wasn't his fault. Everything was fine for years."

But everything changed when Dick visited a restaurant of which Lovitz is part-owner. Lovitz said he was sitting at a table with a friend, and a group at the table next to them treated them to some peach liqueurs. Apparently, Dick and a friend came over to their table, and downed both liqueurs.

"He's standing there with liqueur dripping down his chin and he says, 'I put the Phil Hartman hex on you, you're the next one to die,'" said Lovitz. "And he's smiling, and my blood just went to my head. I wanted to smash him, but if I hit him he would have gone flying into the table behind him. He was really drunk."

Lovitz told Dick's friend to take his buddy out of the restaurant and vowed never to let him back in again. He didn't see Dick again until Wednesday night, when Lovitz was performing his weekly show at the Laugh Factory in Los Angeles.

Lovitz met up with Dick in the packed lobby after the show. Lovitz wanted an apology from Dick for his "Hartman's hex" comment. But, apparently, Dick hadn't really buried the hatchet over their initial argument during their stint on "Newsradio."

"I just wanted him to say, 'Oh, I'm sorry,'" said Lovitz. "Then he leans into me, 'Well you know why I said that? Because you said I killed Phil Hartman that's the first thing you said to me when you got on the show.' I just lost it so I grabbed him by the shirt and I pushed him against the wall. And he's just smiling at me, and then I realized 'oooh, here's my chance.' So I grabbed him by his shirt and pushed him really hard and I smashed his back and his head into the bar. And I did it again. I would have kept going, but the doorman broke it up."

Miller congratulated Lovitz, whom he had introduced as "one of the most loveable, easygoing guys I know." He said, "I love this story. Good for you my friend."

Dick's rep has not responded to calls for comment.

Kenny Loggins on savoring the moments
Thanks for reading CBS NEWS.
Create your free account or log in
for more features.
View CBS News In
CBS News App Open
Chrome Safari Continue
Be the first to know
Get browser notifications for breaking news, live events, and exclusive reporting.