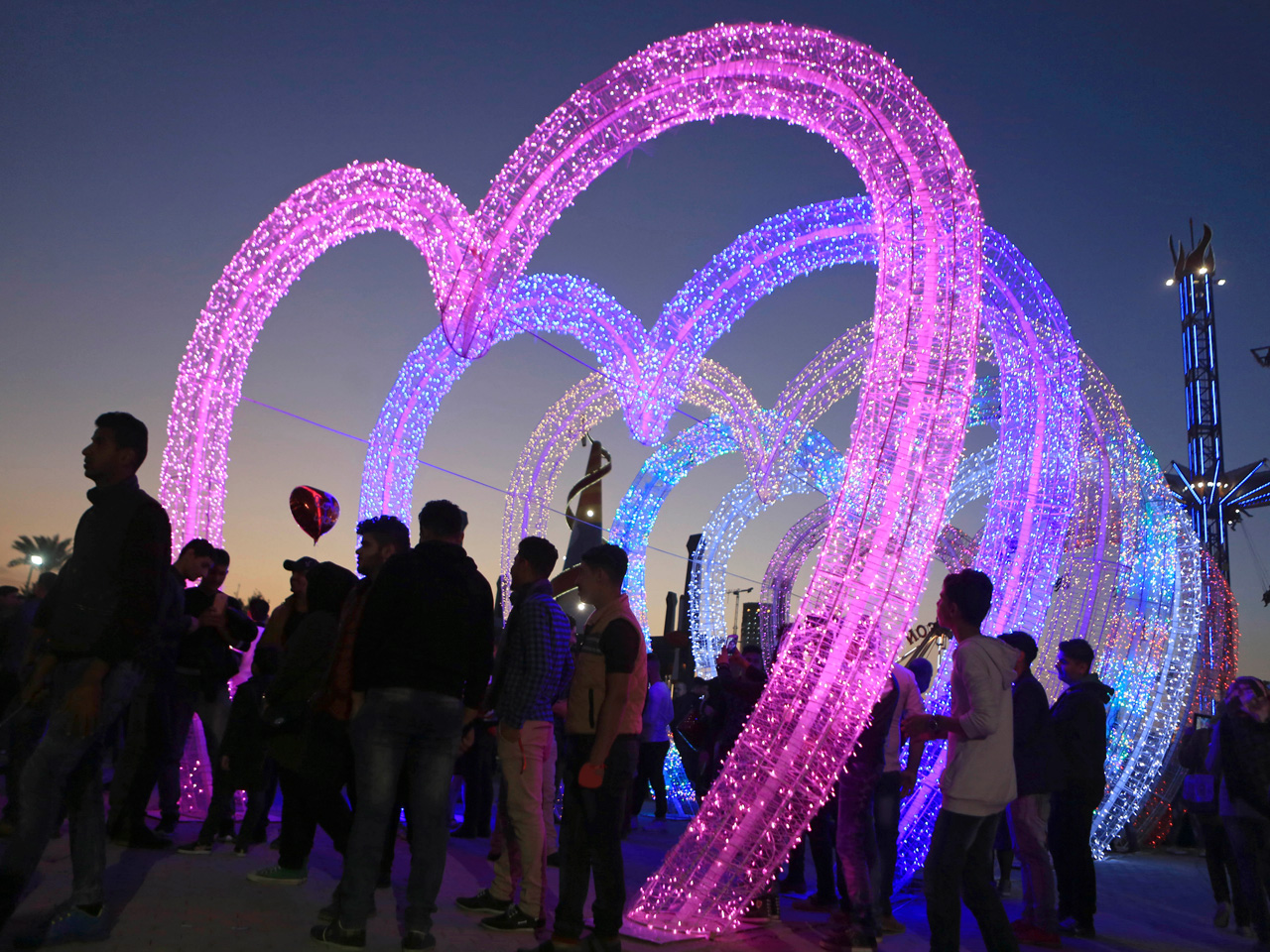 BAGHDAD - Baghdad is plastered with Valentine hearts and roses, and newly engaged Nour and Ahmed are out and about, enjoying a rare lull in violence in the Iraqi capital but wondering how long it will last.

Despite recent setbacks, the Islamic State of Iraq and Syria (ISIS) is still dug in some 37 miles from the Baghdad. And powerful Shiite militias now control security in many parts of the city, providing increased protection but raising concerns as the well-armed fighters often operate outside the government's control.

It's an improvement from over a year ago, when the two met while working at the same magazine. After chatting on Facebook, they started meeting with friends in the evening and on weekends.

"Of course during the times of bad security I would never have invited her to meet me at a restaurant," Ahmed said. "I would be too worried about her," he added with a smile, taking her hand. The two asked that their full names not be published, fearing for their security.

Neither is very religious, but Nour comes from a Shiite family and Ahmed from a Sunni one. Such relationships were common before the 2003 U.S.-led invasion, but have grown rarer since then, particularly after the fierce sectarian fighting that convulsed the country in 2006 and 2007.

They say they haven't encountered any problems yet on account of their unlikely romance, but they worry about the increasing power of religious figures in Iraqi life, including the Shiite militias, many of which trace their roots back to the days of sectarian unrest.

The militias, many of which are trained and armed by Iran, were reconstituted in the summer of 2014 after the army crumbled in the face of ISIS' lightening advance across northern and western Iraq. They have played a key role in securing the capital and prying back land from the extremists, but rights groups say they have also carried out revenge attacks on Sunnis.

In Baghdad, the groups have been accused of kidnapping for ransom and carrying out religiously motivated attacks on nightclubs and liquor stores. Nour and Ahmed say they worry most about the sheer number of armed groups in Iraq, and how little control the government appears to have over many of them.

Nour covers her hair in public with a headscarf, but also wears stylish Western-style clothing and enjoys going out to movies and restaurants, all things she fears she would have to give up as religious leaders and militias grow more powerful.

Muhanad al-Akabi, a spokesman for the Popular Mobilization Forces, an officially sanctioned umbrella group that includes most of the militias, said Iraqi civilians have no reason to fear them. "We are a formal institution, we belong to the government," he said.

He acknowledges that his fighters have "made mistakes" in the past, but attributes them to the growing pains of any new fighting force, saying "it happens everywhere, with every military." He said civilians will have less to worry about as the force gains experience.

He and other Iraqi officials are more worried about ISIS, which is still able to smuggle bombs into Baghdad and may again resort to stepped up attacks on civilians to compensate for its battlefield losses.

Earlier this month, security officials said work had begun on a "wall" around Baghdad that they hoped would reduce militant attacks and allow them to take down checkpoints within the city that snarl traffic. Brig. Gen. Saad Maan, the spokesman for the Interior Ministry, said the wall would be a combination of tightened checkpoints, trenches and blast walls along a 175-mile perimeter around the city.

Ahmed fears that while a wall might keep out some religious extremists, it will lock in others.

"Already, compared to our parents, we have so little freedom," he said, referring to the freewheeling 1970s in Iraq, before the decades of war and sanctions. "If these religious men stay in control, I think our freedom will just be less and less."