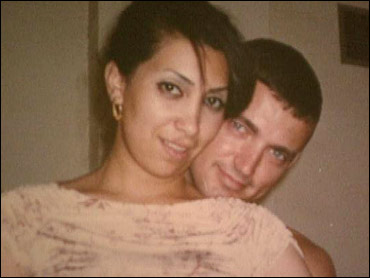 They say all's fair in love and war; unless, perhaps, it involves the U.S. Army.

A year ago, when an American soldier fell in love in Baghdad, his commander ordered him not to marry. What was a heartsick soldier to do? Well, Sgt. Sean Blackwell launched a secret mission to marry the Iraqi woman he loved.

That's when the Army came down with both boots and ordered Blackwell home, 7,000 miles from his bride, Ehdaa, apparently never to see her again.

But, as Correspondent Scott Pelley reported last spring, there was one thing the Army didn't count on. It's something else they say about romance – that love, of course, conquers all.

It's 6 a.m. in Baghdad and Ehdaa Blackwell struggles to get into a bulletproof vest. She's filled with hope for a new future, even as she waves goodbye to everything she has ever known.

Ehdaa is making a run of 300 miles through the dangers of the Sunni Triangle, trying to reach her new American husband, the one that the Army ordered out of her life.

"Sometimes, you just fall in love and you don't know why. I think it's our fate," says Ehdaa. "I think we're meant to be together and, oh, my God, that's the thing I've been waiting for. I just can't wait to see him."

Halfway around the world, in Pensacola, Fla., Sean Blackwell heads for the airport. It's been six months since he slipped a ring on Ehdaa's finger back in the war zone and he hasn't seen her since.

"It's like something I can't even describe. It's like the first time going to Disney World. You know, you get really excited before the actual trip," says Blackwell. "Except I know she's not gonna let me down, like Disney World did once I actually got there."

The dream is to bring together two lives that couldn't be more different. Ehdaa grew up wealthy in a country at war. Sean grew up peacefully, in a working-class area in Florida. He listened to country music; she listened to Saddam. She went to medical school; he held to a family tradition, following his father and six uncles into the military.

Shortly after the fall of Baghdad, it was Sgt. Blackwell's turn at something his family knows all too well.

Blackwell landed in one of those places where the tension was greatest, Baghdad's biggest hospital. One day, amid the chaos, in walked Ehdaa, a young Iraqi doctor.

"To be honest, when I first met her, I was like, you know, she's very, very attractive, but you know, what's the point of trying to start a relationship over here?" recalls Blackwell. "And the more we talked, we started learning more about each other, and it didn't take long for, you know, emotional attachment to grow there."

"I saw a tall, shy, handsome. He had the most beautiful eyes I have ever saw," says Ehdaa. "He's so honest, he's so kind, and when he come, my heart start beating as I am a teenager."

Ehdaa had never met an American before in her life. But soon, she was seeing this American every few days. Blackwell had been in Iraq only a few weeks, but between patrols and weapons raids, she'd bring him home-cooked meals and hours of conversation.

"I start thinking, that's really impossible what we are doing. I'm Muslim and he's a Christian. I'm Iraqi and he's American. It just can't happen," says Ehdaa. "It did. Love can make miracles. I do believe this now."

After three months of war-zone dating, Blackwell pulled the trigger -- keeping, of course, with local tradition, where a marriage proposal is a question asked man-to-man.

Blackwell asked Ehdaa's brother, who told him, "I'd be honored for you to marry my sister."

But under local law, a Muslim woman can marry only a Muslim man. So Blackwell stood before an Iraqi judge and said in Arabic: "There's only one God and that's God and Mohamed is the messenger of God."

Through those words, Blackwell became a Muslim. It was a conversion of convenience, not conviction.

The couple was ready to say "I do" when Blackwell's commanding officer stepped in. There was no regulation against a marriage, but the battalion commander was worried that, in a war zone, it would be a dangerous distraction. So he ordered Blackwell not to get married.

"We were brought together by some, some higher force than ourselves, and it was meant to be," says Blackwell. "And I wasn't gonna let anybody stop that."

For the first time in his career, Sgt. Blackwell set out to disobey an order. On a sizzling August morning, he went out on patrol with a small team. The soldiers responded to a rocket attack. But on the way back to base, the patrol made an unauthorized detour to a restaurant.

Two soldiers with heavy weapons took up sentry posts outside. Blackwell went into the courtyard where Ehdaa was waiting with her family, a judge, and a pair of rings. Friends translated the Arabic vows and recorded on tape one small moment of peace in a larger war.

It ended with a kiss on the forehead, and then Blackwell went back on patrol with his team. He hasn't seen Ehdaa in person since.

When 60 Minutes met Ehdaa in Baghdad, she didn't know if she would ever see her husband again.

"Sometimes, I keep crying. Sometimes, I say that I must be strong for him," says Ehdaa. "I can't let them win. The love must win in the end."

And, in a sense, it did. No charges were filed against Blackwell, and it may be that the Army just wanted the whole thing to go away. Blackwell got away with no more than a reprimand and left the military with an honorable discharge.

But six months after his wedding, Blackwell said goodbye to his mother and headed back towards the war zone he had just left, 7,000 miles away.

Ehdaa, escorted by her little brother, sped past the war zones of Fallujah and Ramadi. 60 Minutes gave the newlyweds a ride to the rendezvous on the border between Iraq and Jordan.

It has taken Ehdaa more than eight hours to get this far, but there was no guarantee Ehdaa would make it out of Iraq. She didn't have a passport because Saddam didn't let doctors leave the country.

Soon, the 7,000-mile separation is cut down to a stretch of highway, 50 miles long. Sean is just over the border in Jordan with a 60 Minutes camera crew.

Back at the border, guards search the car three times, and Jordanian intelligence pulls Ehdaa and her brother aside for questioning. She spends three hours going nowhere, when the improbable happens: One of the guards recognizes her from an article he read about an Iraqi woman who married an American soldier.

"He said that, 'I know you. I know exactly who you are. You'll be surprised, lots of Jordanian people know that you are the one,'" recalls Ehdaa.

And in this dusty little outpost, fame is a passport. Ehdaa continues on her journey. "I don't know. I haven't seen him before in civilian clothes. I still love that uniform," she says. "…I'm going to have a heart attack now. Five more minutes. How do I look? Oh God, a mirror. Oh God. My heart. I can't breathe. Oh my God. It's him."

"She looks just as beautiful as the first time I'd seen her. I feel so comfortable. It's like I haven't been away from her for six months," says Blackwell. "It's like we've been together the whole time."

In a sense, the Blackwells are exactly what the Pentagon had dreamed of at the start of the war — American soldiers embraced by Iraq. It seems ironic that when the military got what it wanted, at least on a small scale, it maneuvered to divide, only to be outflanked by a soldier who would not disobey the orders of his heart.

As it turns out, the road from Baghdad to Jordan wasn't the end of the journey for the Blackwells. In the six months since 60 Minutes first aired this story, they've been living in Jordan, trying to get a visa to come to the United States.

Just last week, they finally made it back to Florida. One year, and 7,000 miles from their war zone wedding, Sean Blackwell introduced his wife to her mother-in-law, and a new life in the United States.