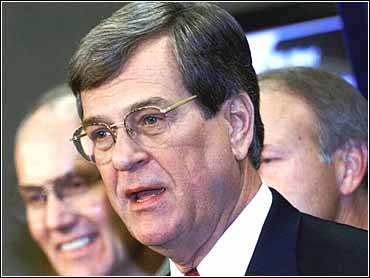 Outgoing Majority Leader Trent Lott accused Vermont Sen. James Jeffords on Wednesday of mounting a "coup of one" that stripped the GOP of Senate control and handed power to the Democrats.

"The American people, and the people of Vermont for that matter, did not vote to put the Democrats in control of the Senate," the Mississippi Republican said. "The decision of one man has, however else you describe it, trumped the will of the American people."

Jeffords' office would not comment on Lott's remarks. A moderate in a party of conservatives, the Vermont lawmaker announced last week he would leave the GOP and become an independent. His move will break a 50-50 Senate tie and leave Democrats with 50 seats and the Republicans with 49.

Lott said that despite the shift, "President Bush's agenda will be heard and voted on." He said Republicans also will insist on a fair hearing for the president's nominations but added: "I worry about what the Democrats are going to try to do with President Bush's nominees."

He would prefer to remain in the majority, Lott said, but there is "something liberating about being in the minority," and he and other GOP senators will be "freer to advocate positions and amendments you really think should be adopted."

As examples, he said Republicans would attempt to redirect several provisions of the education bill the White House negotiated with Sen. Edward Kennedy, D-Mass. "The bill is not what it should be. It has a lot of stuff in there that conservatives don't like," Lott said. He said Republicans also will seek to add tax breaks and other amendments on a patients' bill of rights measure Democrats are expected to bring to the Senate floor in early June.

Asked about other potential defectors, Lott said he talked with Sens. Lincoln Chafee of Rhode Island and John McCain of Arizona. He sounded uncertain of McCain's ultimate loyalty to the party, saying, "I can't believe he would be thinking of doing something like that, but having said that, he has cast some votes on some issues" that diverged from most other members of the party. McCain opposed Mr. Bush's tax cut and is sponsoring a patients' bill of rights with Kennedy that Democrats will bring to the Senate floor.

Click here for a look at the Bush presidency.
Click here for a look at the 107th U.S. Congress.
The Mississippi Republican made his comments in back-to-back radio interviews with Oliver North and Sean Hannity. Both have call-in shows popular with conservative listeners, and Lott's comments suggested he was moving to shore up support among his party's base in the wake of Jeffords' defection.

Lott said neither the White House nor the leadership he heads bears responsibility for Jeffords' deision to leave the party and become an independent. "There's only one person to blame for all this, and that's Jim Jeffords," he said.

"He was often very liberal in his views and quite often agreed more with Ted Kennedy" than fellow Republicans, Lott added.

He said he sensed that Jeffords had grown more distant this year.

"But then as far as him actually thinking about making a switch in the middle of the session here, with a coup of one turning the Senate over to the Democrats and Ted Kennedy and Hillary Clinton and others; it wasn't obvious that he was moving dramatically in that direction or had made up his mind until maybe the weekend before or the week of the fateful decision."

Jeffords' move has stirred anger within the Republican caucus, and several lawmakers have suggested a period of reappraisal for a party that had 55 seats less than a year ago and now faces a return to minority status. But Lott said he expects no shake-up in the leadership as a result.