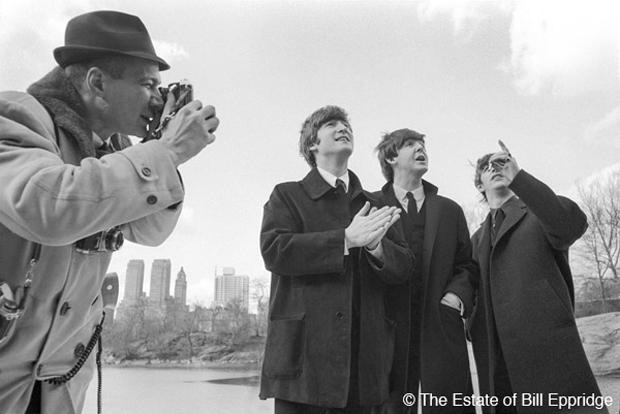 Bill Eppridge believed that a good photojournalist had a certain amount of luck when it came to being in the right place at the right time. He certainly was in the right place on the morning of February 7, 1964. Bill, just 26, was in the Life magazine office early that day when Director of Photography Dick Pollard needed someone to be at JFK Airport to photograph the arrival of a British rock group known as The Beatles.
Not only was Bill there when they stepped off the plane, but he also followed the group for the next six days.  Strangely, all 90 rolls of film, with more than 3000 images went missing for years. They resurfaced around the same time that The Beatles were breaking up and Life, the great weekly news magazine, was ending as well.  This is the backstory:

I had known Bill for more than seven years before discovering that he had photographed The Beatles on that first visit to the United States in 1964. While researching photographs for a magazine project in 1993, I came across an old Beatles black-and-white print with Bill's photo credit on the back - "Bill Eppridge/Life Magazine." The print had come from the Time Life picture collection. I thought there might be more.

I phoned Bill to ask about the photograph. He was very nonchalant - it was no big deal. I, on the other hand, still remembered watching the Ed Sullivan show on a Sunday night in 1964 and hearing the screaming audience as the Beatles played "She Loves You." The Beatles made an impression on me even though I was only nine.

Bill told me how he had turned in his film to the Time Life lab after spending those six days with The Beatles, traveling from New York to Washington, D.C., and back. He made pictures as they happened, never staging anything.
Life only published four of his photographs. Soon after, Bill was assigned to the Chicago bureau. Constantly traveling, he never had time to see the contact sheets from those six days. A few months later, when he finally asked, the film could not be located. No one at the magazine or the photo lab seemed to know where it was.
Seven or eight years later, the film finally turned up on his desk with an anonymous note. There was no explanation as to where it had been all those years.
By then The Beatles were no longer together as a group. Life ceased publication in December 1972,  a short time after the missing photographs mysteriously reappeared. Bill never solved the mystery. He added a note to his acknowledgements page of our new book published in February 2014 with the hope that someone might finally come forward and unravel the mystery. Anybody?

Adrienne Aurichio is co-editor of "The Beatles: Six Days That Changed the World" (Rizzoli),  which features the best of Bill Eppridge's photographs from February 7 - 12, 1964.   In his acknowledgments, Mr. Eppridge wrote, "I owe so much to my wife and editor, Adrienne Aurichio, who spent weeks going through the three thousand images on ninety rolls of film to piece together my story.  I relied on her vision and experience as an editor to research and unravel the photographs, and then pull them together in chronological order."  Mr. Eppridge died October 3, 2013.  A successful photojournalist his entire career, he is perhaps best known for his photograph of the dying Robert F. Kennedy, taken June 6, 1968.