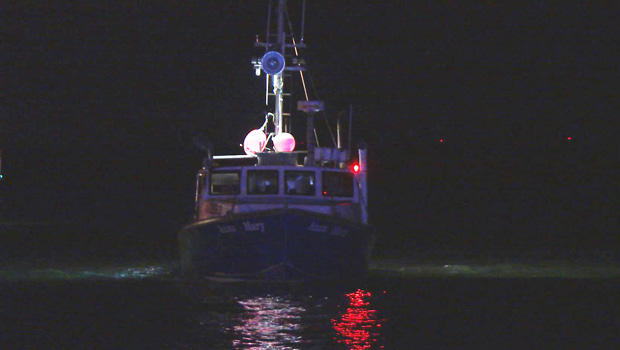 The CDC says that between 1992 and 2008, 155 commercial fisherman died after falling overboard -- just one of the reasons why commercial fishing is among America's most dangerous jobs. Our Sunday Morning Cover Story is from Jim Axelrod:

John Aldridge and Anthony Sosinski -- best buddies since second grade -- are co-owners of the Anna Mary, a 44-foot fishing boat.

For the last 14 years, they've pulled up lobsters and crabs from the sea floor off the coast of Montauk, Long Island.

"It's, like, 'Oh, we got food, we got fuel, the boat's runnin' right. We're off on another adventure,'" said Sosinski.

But these two hearty lobstermen could've done with a little less adventure one July evening four years ago.

Forty miles offshore at 2:30 in the morning, with Sosinski asleep below deck, Aldridge wanted to fill the tanks where they would soon store their catch.

He had to move a 125-pound cooler that sat on top of the tanks' hatch. Aldridge picked up a metal hook to move it, and as he pulled a handle with all his might, it snapped. "And all the momentum just pushed me right off the back of the boat," he said.

The boat was on automatic pilot.  And Aldridge, wearing no life vest, watched helplessly as the Anna Mary motored on.

"I could see the boat," he recalled, "and then it comes up on a crest, and then it's gone."

"Were you screaming for Anthony?" Axelrod asked.

"Screaming, but there's no way he could hear me. You know you're done. Today's the day I'm gonna die."

With his mind consumed by impending death, some instinctive part of Aldridge stayed focused on life.

"I realized that my boots were very buoyant," just like a life preserver. "When I feel in the water, I was on my back, trying to stay afloat, and my legs came up to the surface. That just clicked -- All right, that's a sign. I got my breath and I go, Maybe I should just empty the water out of the thing and push it back in the water with an air pocket in it and see what it does, and I did that and tested it, and I go, wow, and I basically took it and put it under my arm."

"That is crazy-fast thinking," said Axelrod.

"You gotta think quick, or you die."

Afloat in the moonlit water, Aldridge turned his focus to the next pressing issue the ocean provided:

"You're sitting there and you're spinning, Is something coming at me? You're freaking out. Fifteen feet away I see two shark fins come up. And I'm like, This is not real. So I had to commit this whole mantra in my head of, breathe easy, stop panicking, and not focus on that they're right there."

Four hours later, Anthony Sosinski woke in his bunk and could not find John. "I was in disbelief, straight-up disbelief. He can't be not here," he said.

He radioed the U.S. Coast Guard: "'This is Anna Mary, I lost a crew member overboard. I'm in shock!'"

"I never thought that he was dead," Sosinski told Axelrod. "Right now he's alive, and we're looking for him."

At the Coast Guard in New Haven, Conn., Commander John Theel was in charge. He immediately put search and rescue protocols in place, though his fear was that they would not find anything.

A computer produced a zone of probability where Aldridge would most likely be.

"Around nine we know Anthony went down to go to sleep," Theel said. "And we have all kinds of inputs that we put in there -- how tall he is, whether he was wearing a floatation device or not, what the winds are doing, the currents. So it just mathematically spits out anywhere from 5,000 to 10,000 computations."

The search area was roughly the size of Rhode Island.

Axelrod asked, "How could you possibly search an area the size of Rhode Island and find him?"

"We train our people of what to look for," Theel replied. "Either a coconut or a basketball, floating on the water, which is incredibly hard."

On board the Anna Mary, a critical clue: Anthony found the busted-off cooler handle, helping the Coast Guard and a volunteer fleet of fishing boats narrow the search.

When the Anna Mary reached a depth of 40 fathoms, or 240 feet, that was when Aldridge and Sosinski would start filling those tanks. "And we realize the 40-fathom curve is the point where John was likely moving the cooler, when the handle broke," said Theel.

He came upon a swell and could see a fisherman's buoy way in the distance. It was just what he needed: a shot of hope when his supply had nearly run out. With his boots keeping him afloat, he made it to that buoy and hung on for his life.

"And then the helicopters are going by to the west of me," he recalled. "Waving, yelling, all of it, I know they are too far away to see me.

"And I guess within about 40 minutes later, all of a sudden it's like, here comes this helicopter, a big giant thing over the sky. And I start flailin' my boots and splashin' and wavin', everything!"

"And then I know: Oh my God, I'm saved. Unbelievable. You know, you can't believe. Wow, I am gonna be saved!"

Coast Guard swimmer Bob Hovey was lowered into the water, and loaded Aldridge into the basket.  Twelve hours after he fell into the Atlantic Ocean, sure he was a dead man, Aldridge was safe.

"The pilot put his visor back on and looked back at me and said, 'Man, you got some will to live.' And I said, 'I got a lot of people that love me, just to die like that.' And he goes, 'Man, you are one tough dude. We don't find live people; we find bodies.'"

After the rescue, Aldridge didn't see Bob Hovey again … until Axelrod brought them together on the dock in Montauk.

When asked what he remembers about first making contact with Aldridge, Hovey replied, "His charisma." When he told Aldridge that they'd been looking for him for nine hours today, the sailor replied, "Well, I've been looking for you for 12!"

Today the Coast Guard uses the Aldridge rescue as a teaching tool. Commander Theel said, "It's nice when it works out!"

John's sister, Kathy, was also there when Axelrod brought the two together. She got to thank Hovey for saving her brother.

John Aldridge's ordeal and miraculous outcome have turned into a new book, "A Speck in the Sea"; a movie deal; and a lot of treasured souvenirs -- none more treasured than those boots.

"These are the ones that saved my life," he said.

Axelrod asked, "Is there a lesson in this that people hearing your story should learn from what happened to you?"