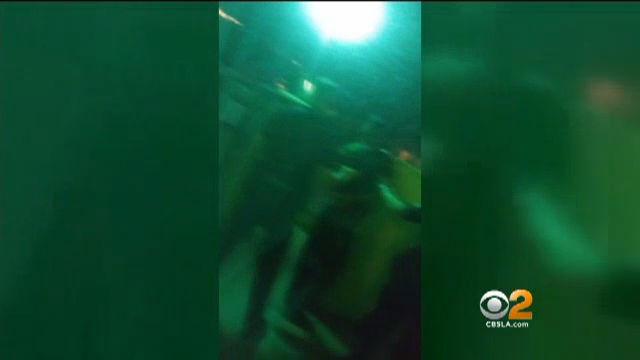 The video was captured Saturday night outside of an apartment building in Del Rey.

The clip shows Taaj Williams in handcuffs, standing up. At one point, Williams and the officer walk behind a wall, but then he is seen lying on the ground.

Williams' mom, Tyeesha McDonald, told CBS Los Angeles that her son was thrown down so hard that he was knocked unconscious.

"I thought he was dead," she said. "I've never seen anyone unconscious before. It scared me. I was frantic. I couldn't control my emotions."

Williams suffered a black eye from the incident. He was let go later that night and did not understand why he was in handcuffs in the first place, according to family members.

"He said [the officer] threw him down," McDonald recalled. "That's the last thing he remembered – getting thrown down and waking up on the ground, hearing my voice calling his name."

"I get emotional every time I do look at the video," she added. "I just have a loss for words. I'm angry that happened. Whatever went on, there's no reason for that force."

According to LAPD Officer Sal Ramirez, officers originally responded to a call in the area, but it remains unclear what it was for.

Now, police are asking other witnesses to come forward.