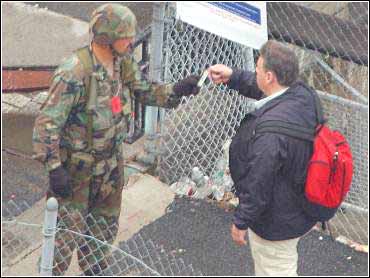 Some stores in a retail concourse beneath one of the World Trade Center buildings were looted, the New York Times reported Friday.

The newspaper said the thefts were almost certainly carried out by rescue workers searching for survivors in the rubble of the 110-story twin towers.

In a related development, there were also some reports of looting at Battery Park City, an apartment complex near the World Trade Center. The apartments were evacuated after the terrorist attack on the twin towers.

Karlene Wiese, a legal secretary, got 12 minutes to see her apartment for the first time with a National Guard escort. She said her apartment was wrecked, and that someone had stolen her money and jewelry.

About 5,500 apartments in the complex remain closed. Residents had been permitted to re-occupy 750 units.

James Gill of the Battery Park City Authority said the agency has received a few similar reports of items being stolen from apartments after the Trade Center attack. Gill expects more units to open on Friday.

The Times' account of looting at World Trade Center 5, a building near the twin towers, was based on interviews with New York National Guardsmen on duty at the structure.

The newspaper said the looters had taken items from a watch store, raided cases of designer sunglasses in another shop, tried to pry open at least one cash register and penetrated the service room behind a row of bank automated teller machines, where steel safes appear to have prevented them from making off with cash.

The Times said the extent of the looting and those responsible for it were not known.

The Times quoted Guard officials as saying that it was virtually impossible for civilians to reach the underground concourse, which is very tightly guarded.