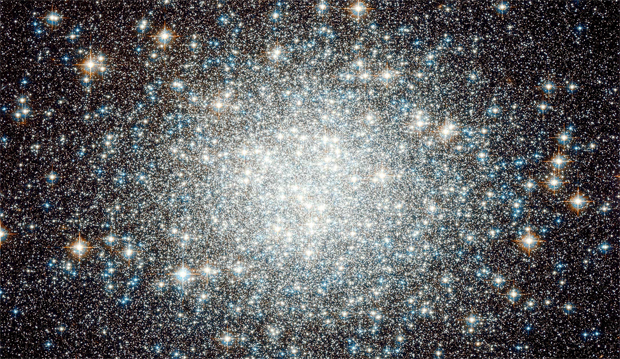 Searching for ET? Check out one of the Milky Way's 150 or so globular star clusters.

That's where you'll find the sort of quiet, well-established stellar neighborhoods that might provide favorable environments for intelligent life and even interstellar communications and travel, a researcher at the Harvard-Smithsonian Center for Astrophysics said Wednesday.

"Once you've developed an independent outpost, the chances that a catastrophic event that would destroy the situation would become smaller."

The Milky Way features about 150 globular clusters made up of compact swarms of ancient stars that formed within a few billion years of the birth of the universe. Globular clusters can have between 1,000 and one million stars packed into a cube 3.2 light years on a side.

Stars in globular clusters formed before successive generations of massive stars had time to cook up heavy elements in supernova explosions. As a result, globulars contain mostly low-mass, long-lived stars that die very gently," Di Stefano said. "In a way, it would be very serene to live in a globular cluster."

But it would be very, very bright. In contrast to Earth's neighborhood, where the nearest star, Proxima Centauri, is 4.2 light years -- 24 trillion miles -- away, the nearest star at the heart of a globular cluster would be 20 times closer or thereabouts, just one trillion or so miles away.

Just around the corner, as galactic distances go.

"If that's the case, then round-trip communication time using light might take on the order of a month rather than 8.6 years," Di Stefano said. "And any travel we wanted to do would take one one-hundredth the time it (would take) to go to Proxima Centauri."

NASA's Kepler spacecraft has detected planets around low-mass stars like those in globular clusters, but astronomers do not yet know how common planets might actually be inside the compact star swarms or how many of those might orbit their stars in the habitable zone where water can exist as a liquid -- a requirement for life as it is known on Earth.

For low-mass stars like those found in globulars, "the zones of habitability are closer to the stars because the stars are less luminous, and that's a good thing," Di Stefano said. Planets orbiting farther out in the habitable zones of more luminous stars would be more susceptible to gravitational interference from nearby stars.

"Smaller planetary systems have a better chance of surviving for long times," she said.

As it turns out, globular clusters have what Di Stefano called a "sweet spot" where stellar density is high enough to facilitate interstellar communication and travel, but not so dense that solar systems would be gravitationally unstable.

Of course, no one knows if any civilizations have, in fact, developed in globular clusters but statistically speaking, Di Stefano thinks it's a reasonable possibility.

"Our results indicate globular clusters are a good place to search for planets and for life," she said. "We have established the existence of these sweet spots and possibly, if there are civilizations in those sweet spots, they would have the opportunity to establish outposts that would facilitate their long-term survival."