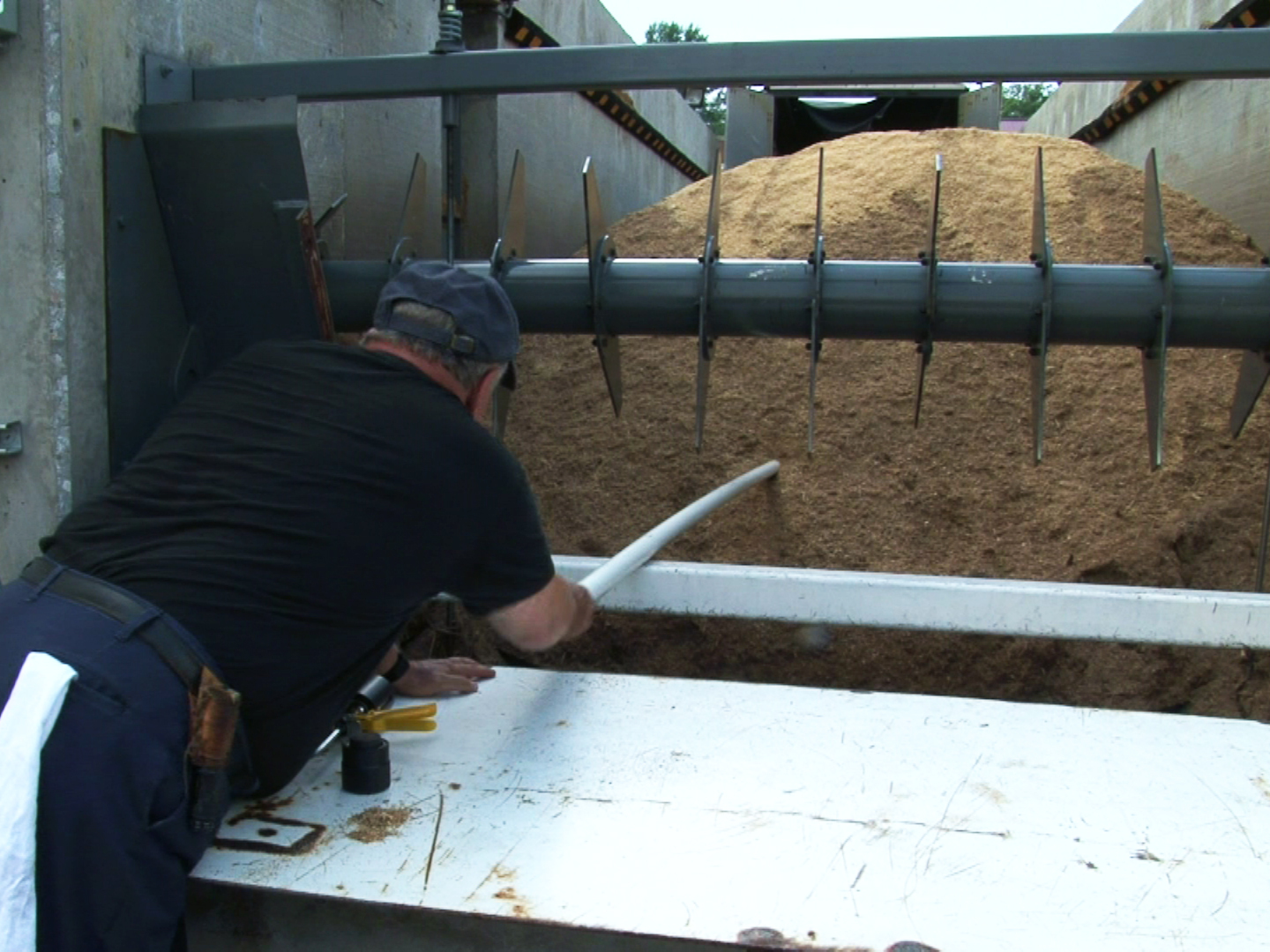 FARMVILLE, Va. Chopping down trees isn't generally considered environmentally friendly. But central Virginia's aptly named Longwood University has partnered with 11 local logging mills, buying their lumber waste - which would otherwise end up in landfills - and using it to heat its 62-acre campus.

This year marks the 30th anniversary of Longwood's sawdust-fueled heating plant, which produces about two megawatts of power - a third of the school's electricity.

"The initial move into sawdust was a business decision - it was based on finances and economics," said Vice President of Facilities Management Richard Bratcher. "We now have a beautiful 'rails-to-trails' where the railroad tracks used to be, so we can't haul coal in here anymore... So, realistically our options are fuel oil and wood. And fuel oil is just extremely expensive."

Longwood's heating plant currently consists of two biomass boilers, which consume between 40 and 80 tons of sawdust per day via furnace temperatures exceeding 1,200 degrees Fahrenheit. During colder months and when student capacity is at its peak, the university taps into its old fuel oil plant, which stands next door to the new facility; in the summer, though, just one sawdust boiler is enough to heat the entire campus.

Energy Manager Kevin Miller, who said the school was "kind of forced into" its eco-friendly habits due to its resources, imagined the price tag of running entirely on fuel oil, given today's gas prices: "If we were running total fuel now, and we're at 3.80 a gallon," he said, "that would be a substantial cost, and that would have to be passed onto the students."

Last year, sawdust saved Longwood $4.5 million dollars - about four percent of its entire budget. But it's more than just cost-effective. Bratcher said 2006 is when the school began to realize its potential as a laboratory test bed for sustainability practices, even combining any leftover biomass with trash from the dining hall to crate rich mulch for campus plant life.

"At Longwood, we're trying to keep our eye on the future," he said.

Finely tuned testing procedures to monitor a condensate receiver tank and deaerator tank ensure that the plant takes back 95 percent of the boilers' steam, increasing fuel efficiency. And Miller explained that the carbon-neutral emissions from burning the sawdust are gobbled back up by the same types of trees that created it.

"Whatever we emit from the plant as a byproduct of burning [the trees] - they absorb it as part of their growing process," he said. "So think of it as a one for one."

In March, the plant received a grant from Dominion Virginia Power to commission a study on how to dry sawdust in order to increase storage capacity in its two, 212-ton silos and cut back on upkeep.

Right now, Longwood relies on a single backhoe to mix wet and dry batches of sawdust to keep moisture levels below 50 percent. Plant operators say they never let the silos exceed 60 percent capacity, due to weight constraints - but with dryer materials, they hope that percentage would spike to 80.

Posing even more opportunities for breakthrough, with a $250,000 grant from the United States Department of Agriculture (USDA) Forest Service the university is looking at a third boiler, which it hopes will be able to generate electricity in addition to heat, and test out alternate fuel types. Bratcher said it could generate "close to half the power for the institution," and could save an additional $250 to $300K.

"If someone comes up with a distilled biomass product that's liquid, we'll be able to test burn it and then burn it," he said of the third boiler. "Whether it be chicken waste or other bio fuels, we want to be able to diversify the sources of fuels that we can use."

Cost-effective and eco-savvy - why doesn't everyone use sawdust fuel?

One reason, Bratcher said, is logistics: "There are no woody biomass stations on the corner where you can go and drive up and buy your woody biomass." Longwood is in the business of hauling its own fuel from the sawmills, and last year opened a biomass depot just off campus to store, weigh and mix its sawdust supply - a commitment that might "make some people cautious about jumping into it," Bratcher said.

Pointing out that Longwood, with its 4,200-student body, is "running the equivalent of a small town," Miller said it's possible that entire villages, and certainly large complexes, could draw its heat and even electricity from sawdust power. Still, he qualified, it's a "give and take."

"As you get to a supply chain that could handle that maximum capacity, you're going to be even more rural," Miller said. "You'll hit a point where you're not gonna have the fuel supply and the consumer demand... so, probably where we're at is a good medium."