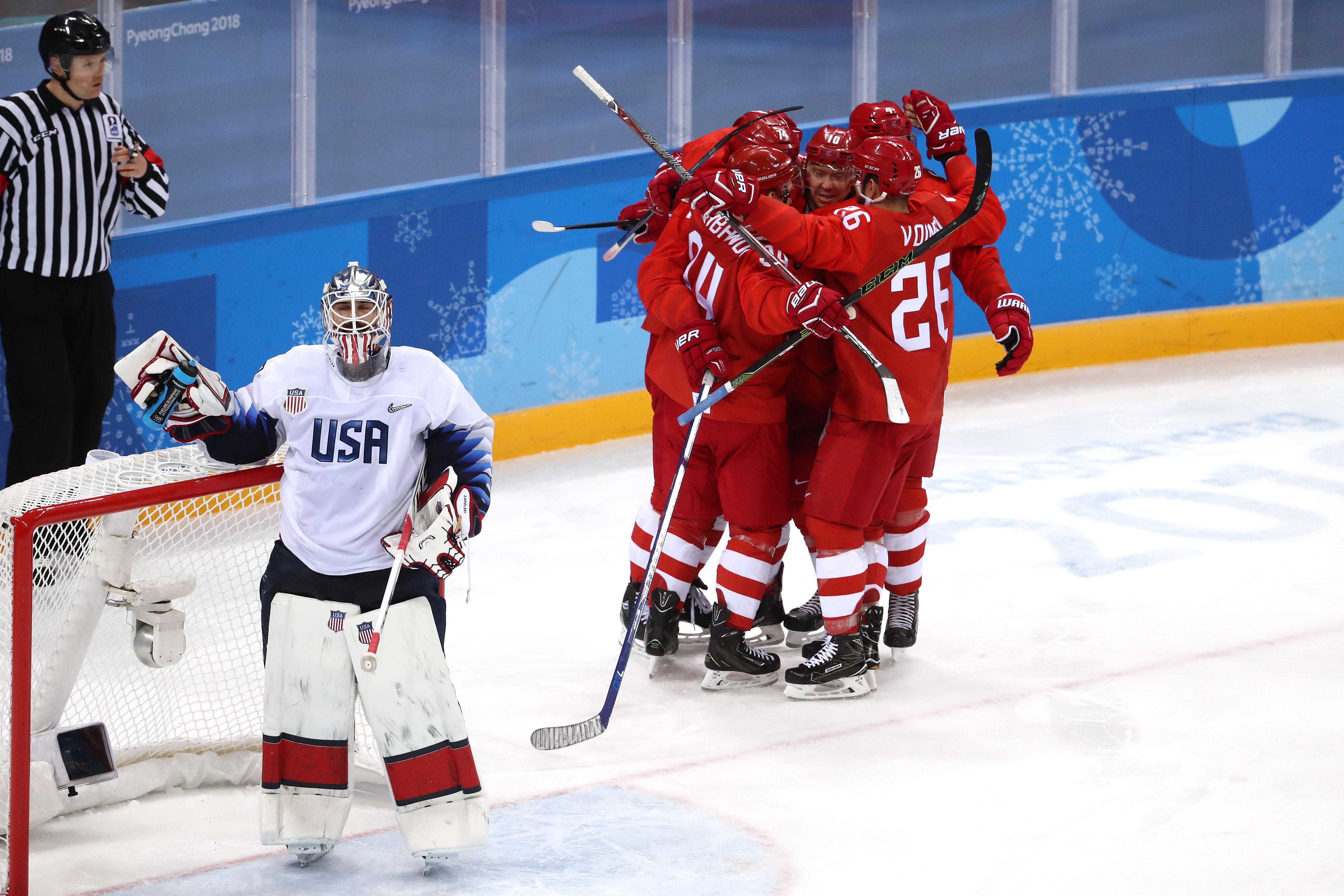 Team USA had a disappointing 4-0 loss to Russia, dropping Team USA to 1-2 in Group B play. The U.S. must now play in the qualification round Tuesday, while Russians finished first in the group and move on directly to the quarterfinals, hoping their dominance puts T.J. Oshie's shootout performance in 2014 further in the rearview mirror.

Nick Goepper, 23, took silver after putting down a 93.60 final run that vaulted him into the silver medal spot after failing to crack 70 points in his first two trips down the course, CBS Sports reports. Oystein Braaten took gold for Norway, scoring a 95 on his first run that was never topped.

Alex Beaulieu-Marchand from Canada wound up with the bronze. Goepper delivered Team USA its 10th medal of the Games on the same day that short-track speed skater John-Henry Krueger took silver in the 1000-meter final.

American Gus Kenworthy, coming off a silver medal at the Sochi Olympics, has been one of the most prominent American athletes at these Olympics, but he just couldn't seem to stick his landings in the final.

Marcel Hirscher has won the Olympic men's giant slalom. It's his second gold medal at the Pyeongchang Games.

The 28-year-old Austrian star extended his first-run lead to win by a huge margin of 1.27 seconds over hard-charging Henrik Kristoffersen of Norway. Kristoffersen rose from 10th-fastest in the morning.

Hirscher can complete a sweep of three individual titles in his best event, the slalom, which is scheduled for Thursday.

Lindsey Vonn has returned to the Olympic Alpine speed race course, where she was fastest in a practice run for Wednesday's downhill race.  One day after placing sixth in the super-G at Jeongseon, Vonn clocked 1 minute, 41.03 seconds on the 1 three-quarter mile downhill course.

The American star was 0.18 seconds faster than Ramona Siebenhofer, with the Austrian's time recorded despite missing a gate.

Alice McKennis of the United States was third-fastest, 0.53 behind Vonn.

Sunday's practice was the first of three official training days before Vonn tries to regain the Olympic title she won in 2010.

The surprise super-G gold medalist, Ester Ledecka of the Czech Republic, did not take part in the practice. Ledecka is also due to compete in snowboard parallel giant slalom this week.

Marcel Hirscher of Austria has taken a big first-run lead in the Olympic men's giant slalom and is well positioned for his second gold medal of the Pyeongchang Games.  Hirscher was 0.63 seconds faster than Alexis Pinturault of France. They finished 1-2 in the Alpine combined on Tuesday.

A Norwegian is third, but it isn't Henrik Kristoffersen, who is Hirscher's main rival in the World Cup.

Leif Kristian Nestvold-Haugen has 0.66 to make up on Hirscher in the second run this afternoon. Kristoffersen was 1.31 back in 10th place.

American Ted Ligety is struggling to retain his Olympic, trailing by 2.44 and out of the top 15.

Luca de Aliprandini of Italy and Manuel Feller of Austria lost balance approaching the next-to-last gate and were disqualified in the men's giant slalom. De Aliprandini was set for the second-fastest time behind leader Marcel Hirscher of Austria when he went across the course into safety nets. He appeared to hurt his left leg.

Feller was turned around and slid backwards on his back. The race started under blue skies on a clear, cold day at Yongpyong Alpine Center.

Hirscher, who already won gold in Alpine combined, was fastest by 0.63 seconds after 10 skiers had started.

8:00 p.m.: CBS Sports analysis: What's next for Team USA hockey after the loss to Russia?

The United States men's hockey team had an opportunity to secure a bye in the elimination round of the Olympic tournament on Saturday, but that chance quickly disappeared against the Olympic Athletes from Russia, who dominated in a 4-0 rout, CBS Sports reports.The loss dropped the Americans to 1-2 in Group B play, with the sole win coming in a 2-1 victory over Slovakia.

OAR completely dominated zone control throughout the game, and that's where Team USA needs to get better. If the Americans can't start to control the puck, they have no chance whatsoever of advancing to quarterfinal play.

The thing is, this team wasn't expected to bring home the gold. Losing NHLrepresentation crippled Team USA, especially so late in the cycle, hearkening back to the Miracle on Ice days -- but that was called a miracle for a reason. The American team, frankly, isn't that good this year. Gary Bettman's decision to keep NHL players out of the Olympics was already controversial, but after this showing there's a very real chance we'll see people harassing the NHL commissioner to bring them back to the Olympics, whether that's realistic or not.

The team inspired some hope early on, going up 2-0 on Slovenia in the first game of group play. Team USA then gave up three unanswered goals, including the overtime game winner. Team USA then won 2-1 against Slovakia, inspiring further hope for the group. However, OAR's Nikolai Prokhorkin quickly dashed that hope, scoring two goals for Russia before former NHL star Ilya Kovalchuk slammed the door shut for a 4-0 Russia win.

The reason is simple: This team finished behind Slovenia in group play. That's not good. In a group with Russia, Slovakia and Slovenia, Team USA was hardly in a Group of Death. But it still finished in third place, because it's a teddy bear as well. It's hard to blame the players. They're nearly 30 years old in average age, and they're fielding some of the United States' oldest Olympians across any discipline. It's a difficult situation, period.

So what's next for Team USA? An elimination game, technically. Between Monday night and Tuesday morning, the first round of the playoffs will be played. However, Team USA needs to think about the bigger picture too. The first step is to recruit younger talent. Presuming that the NHL continues to keep players out of the Olympics, the only way to get another Lake Placid will be to recruit players that can handle the strain of the Olympics. That's not to say that the current team is somehow out of shape -- it's just old. And as long as players from the Kontinental Hockey League are allowed to represent Russia, the 4-0 gulf will be apparent.

This team might not medal, but it's certainly giving a lot to think about moving forward. And it isn't out yet, there's still hope. But it's a longshot. And if Team USA fails to make the quarterfinals or, worse, gets routed on Monday night/Tuesday morning, then fans (and NHL players, for that matter) may be fairly vocal in letting the country's best represent the country. Because four goals in group play isn't going to cut it if you want to field a team with any chance at a medal.

Going into Saturday, Norway still dominated with 22 medals. Team USA and Russia were tied with 9 medals each.