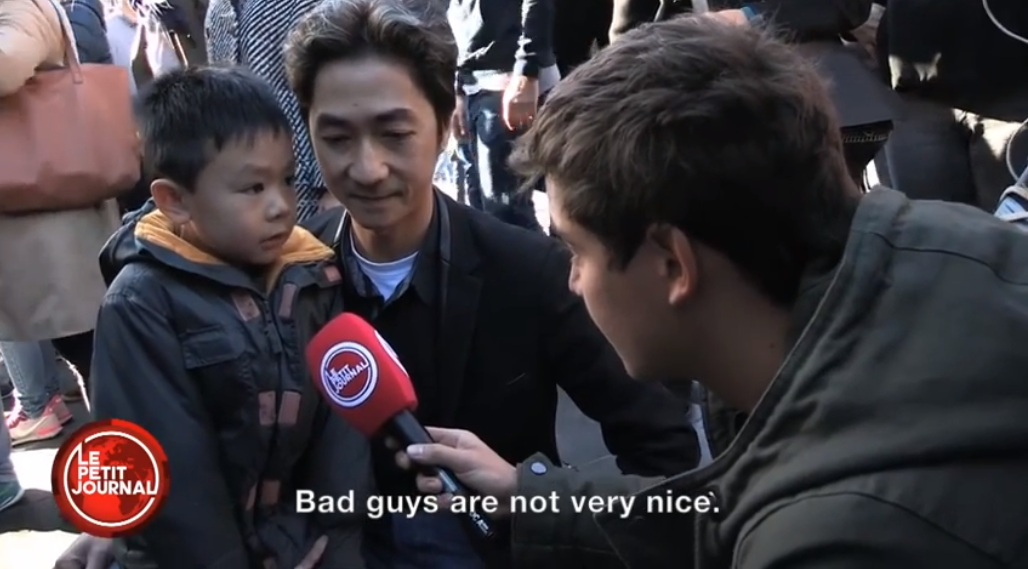 As the world tries to make sense of the vicious attacks on the "City of Light" over the weekend that left at least 129 people dead, one Parisian boy is starting to piece it all together.

In an interview with French news broadcast Le Petit Journal, a little boy spoke with his father about his understanding of why the events unfolded.

"Yes, because they're really mean," the boy responded without hesitation. "Bad guys are not very nice."

The boy paused as his dad and reporter silently urge him to continue speaking his mind.

"And...we have to be really careful because we have to change houses," he continued.

His father then reassured him that they won't have to move, because "France is our home."

Confused, the boy looked back at his father: "But there's bad guys daddy..."

After 30 seconds of being taped, the boy was told "there's bad guys everywhere."

"They have guns," he agreed. "They can shoot us daddy, because they're really really mean."

His dad then pointed to makeshift memorials around the city: "They might have guns, but we have flowers."

"But flowers don't do anything," the boy argued.

But his father fought back, assuring his son that flowers and candles are used to protect them -- "to fight against the guns."

The boy looked around him, smiling, he asked: "It's to protect?" "Exactly," his dad responded.

After a minute-long interview, the reporter then asked the boy if he feels better.

In four words, the boy said: "Yes, I feel better."