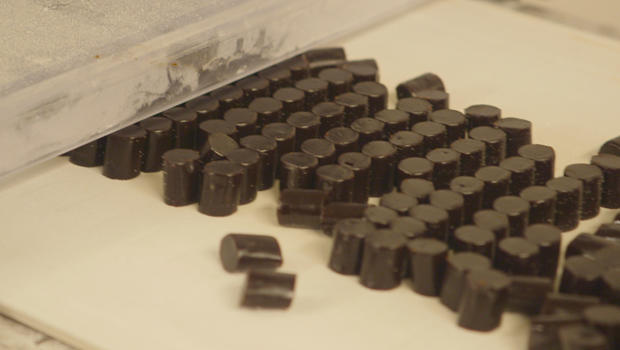 Wander the aisles of any Scandinavian supermarket, and you'll find them loaded with licorice, sold in all shapes and sizes. Licorice, especially salty licorice, is a favorite Scandinavian treat. But when Conor Knighton sat down to eat some, it felt more like he'd been tricked.

Licorice is made from the licorice root, Glycyrrhiza glabra. The Twizzlers and Red Vines that Americans sometimes call "licorice" don't actually contain ANY licorice at all. "Licorice is sweet, licorice is salty. The salty stuff is really important to the Scandinavian people, and it's really, really strange to foreigners," said Johan Bülow, founder of Lakrids, a licorice company based in a black fortress on the outskirts of Copenhagen, Denmark. ["Lakrids" is simply the Danish word for licorice.]

Knighton said, "The second you step into this building, it smells like licorice."

"Definitely. I've been driving around with the smell of licorice for 11 years now."

Eleven years ago, Bülow opened his very first store in the seaside town of Svanke. Bülow was born on Bornholm, a small, picturesque Danish island in the Baltic Sea. "This is paradise on Earth when it's summer," he said. "Super-amazing."

Bornholm is the sunniest place in all of Denmark, and the crowds of tourists passing through gave Bülow a chance to try out his licorice creations.

"The idea was actually to create a recipe or two, and then just be in front of the actual consumer and to sample them and to look in their eyes and see, what do they like. Are they smiling? Are they throwing up?" Bülow said.

He found he could get international visitors to try his product if he mixed the licorice taste with flavors they were more familiar with, like wild blueberry.

At the factory back in Copenhagen, Lakrids now produces licorice coated in various flavors of chocolate.

"This is more for me," Knighton said. "I think you've got to hide it in something else for me to like it."

There's also licorice mixed with habanero chili. There's a caramelized organic slow-cooked licorice for connoisseurs. There are licorice syrups and sprinkles to mix with other dishes.

You won't find any of this in the grocery store, however; Lakrids has marketed and packaged itself as a luxury good, sold in small boutiques.

When Danes like Patrick Nielsen buy Lakrids, it's as a special treat. "When we have guests or family parties or anything, we've got, like, the 'good licorice,'" Nielsen said.

And at stores in the Copenhagen Airport and the Tivoli Amusement Park, Danish employees try to convince curious tourists to sample a taste that they've grown up with.

Knighton asked, "Do you feel like you're on a mission to convince them?"

"Yeah, yeah, I do," said Thea Uhrbrand. "It's, 'Then, you have to try this one.' First, you have the salted caramel. It's a flavor everybody likes."

Lakrids just opened two stores in Dubai, and is now sold at Chelsea Market in New York City. But it all began back on Bornholm.

Technical director Tage Kusk, who has worked with Bülow since the beginning helping invent new flavors, said of Bornholm, "I call it the Vatican of licorice, because it's where everything starts. For us, it's a holy place."

The packaging and the presentation are important, but licorice is still at the root of everything.

Kusk said, "If you give us the time, we can make the whole world love licorice!"