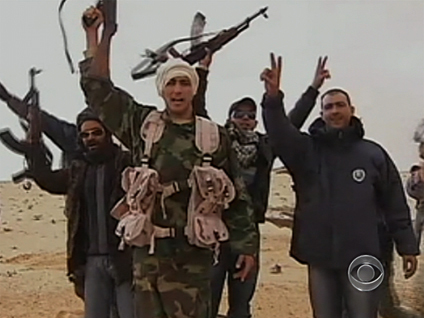 This is the ultimate trophy for the rebel fighters: the engine of a Libyan jet shot down by their anti-aircraft guns. The bodies of its two crew members lie nearby, reports CBS News correspondent Mandy Clark.

CBS News arrived in the town of Ras Lanuf just after the warplane was downed and the rebels were eager to give us a tour of the wreckage.

"The jet was flying over the town and the oil terminal," said a man in Arabic through a translator. "We were afraid it was going to bomb us."

Incredibly the man who shot down one of Qaddafi's warplanes was a civilian volunteer. Tariq Fathi Bu shaala told CBS News he took over this anti-aircraft gun at noon and fired his first and most deadly shot at 3 p.m.

"It was a sandstorm," the man told CBS News. "I could barely see the jet and only one barrel of the gun was working."

Yet another morale boost for the rebel fighters, many of whom joined the battle after getting just a few minutes of weapons training.

This victory has given the rebels an incredible amount of momentum. Ras Lanuf is yet another important oil shipping terminal and is a piece of territory that Qaddafi desperately wanted to control.

The rebels have already pushed beyond Ras Lanuf into the town of Bin Jawaad where they were celebrating this afternoon. Now they are on the road to Sirte, which is Qaddafi's hometown, and that could be the toughest battle yet.

They need to consolidate their forces and try to get a more formal chain of command before they move on that heavily defended government stronghold.

The biggest threat is still Qaddafi's air force, as the residents of Benghazi learned last night when government warplanes hit a weapons dump, killing 26. Today thousands of people came out for the funerals, a reminder of the high price the people of Eastern Libya have already paid in the first weeks of this revolution.