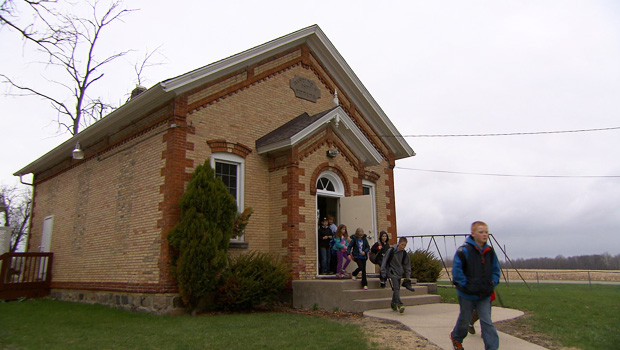 There's nothing like a desk and a chalkboard to bring back memories of the one-room schoolhouse. Unless, that is, you live in one of the American towns where these fabled schools are more than just a memory. They're alive and teaching. Our Sunday Morning Cover Story is reported by Barry Petersen:

For a century-and-a half, Montana's Pioneer Mountains have echoed with the young voices from the Divide, Mont.'s one-room school.

Yes, there are still one-room public schools in America. Today about 200 one-room schools carry on a tradition that's older than America itself. And while the frontier where they first appeared may be gone, the spirit that they helped create is alive and well in towns across rural America.

"This is the heart of the community," said teacher Judy Boyle.

At Divide School, Boyle loves what she does: "I have teacher meetings once a week. It's with me, myself and I. We get along really well!"

Divide School teaches grades K through 8. At times it's had as many as 30 students.

This year, with only three students, Boyle can give such individual attention, she makes lesson plans for each student.

"You're really designing something custom-made for these three kids. That's, I would think, a great thing to be able to do as a teacher," said Petersen. "

"It is, it really is," said Boyle, "because you can respect their differences and what makes them tick."

But there are some key similarities between a one-room schoolhouse and your neighborhood school. Take the cost: it's roughly the same per student, and all the schools have to meet the same state and national standards.

And sometimes, like at Divide, there are additional expectations at a school that has been operating since the 1870s.

"In these small communities, their schools are really important to them," said Boyle, "because the school is what generates the reputation of that town."

So for most of us, the one-room school is now just folklore -- the kind that Laura Ingalls Wilder brought to life in "Little House on the Prairie."

It's been a long time since the farmlands near Lansing, Mich., were prairie.

Brenda Hydon (left) teaches a class of 18, ages five to 12, at the Strange one-room school. Founded in 1879, the kids still sit in the exact same classroom, except now they learn on iPads. But one teacher job requirement hasn't changed across all those years: being self-sufficient.

"Yes!" said Hydon. "At first, it was overwhelming. But now it's part of the job. You just have to [have] the instinct to know what to do and what to say."

And here the lessons are not just about math or science, but about older children helping the younger ones with things like learning how to read.

And there is an unusual teaching tool that may only work in a one-room school: eavesdropping. It sure helps first grader Thomas Trygier: "'Cause when I was in kindergarten, I was, like, listening to all the third grade stuff," he told Petersen. "So I learned a lot in kindergarten."

"I remember last year he came from kindergarten, 'Mom, what is the Silver War?'" said his mother, Cynthia. "He didn't know it was Civil War. But he hears the older kids talking."

Which is why Cynthia Trygier (herself a teacher at a Christian high school) wanted seven-year-old Thomas in a one-room school, even though there were bigger schools closer to their home.

And at Strange, there are other lessons of life; students must clean the school every day.

Petersen asked, "What are you trying to teach there?"

"Responsibility," said Hydon. "I think responsibility goes with every aspect of life that we do. I mean, it carries over to a work ethic that everyone should have instilled in them.'"

You might think kids would miss things like team sports, but they don't. At Divide the local one-room schools get together to make up a track or basketball team.

But for some, it's hard when the day comes to go to the big city high school. It can be, in a word, terrifying.

"I mean, you're going from, you know, seven, eight kids to thousands," said Jon Dupuis.

How did he handle it? "Pretty poorly at first. But as freshman year moved on, I came out and was able to, you know, make friends, talk to people, get on with my life."

Jon Dupuis -- now a senior who's going to college next year for a degree in computer science -- says that, in balance, the one-room school was the unique basis for a life of learning.

Petersen asked, "How do you think you did academically against the kids who had gone through a normal school system?"

"In the top ranks," Dupuis said.

Why? "I think it was the push of education here. There was no discouragement. It was always, what can you learn, what can you do? You can do this. You will learn this."

"I'm with these students 180 days a year for nine years of their lives," said Judy Boyle.

"You have a real personal interest in these kids," said Petersen. "These aren't just kids behind a desk for you."

No wonder that when it comes to education, the teachers and students in one-room schools so often consider themselves the lucky ones.