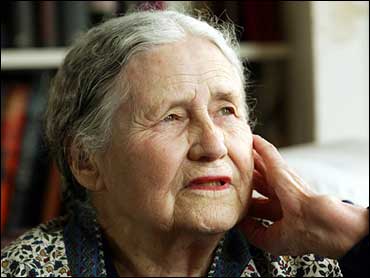 This column was written by Dan Kellum.

Wired members of the literary world knew about Doris Lessing's Nobel Prize before she did, and her first response was an almost studied lack of interest to the financial award or the prestige it might bring. "Oh Christ...I couldn't care less," she is reported to have said when she came in from grocery shopping to find a phalanx of reporters at her doorstep.

But even before Lessing showed off her indifference, the press seemed eager to paint her as a departure from her immediate predecessors. According to The New York Times, "Although Ms. Lessing is passionate about social and political issues, she is unlikely to be as controversial as the previous two winners, Orhan Pamuk of Turkey or Harold Pinter of Britain, whose views and comments on political situations led commentators to suspect that the Swedish Academy was choosing its winners in part for nonliterary reasons." In the past few years, these "nonliterary reasons" have been specifically linked to authors and or political figures (in the Peace Category) who have questioned the United States' involvement in Iraq.

Though Lessing has not in many years been an advocate for specific change, her work is, however, just as political as that of previous Nobel Laureates. At the outset of her career she was explicitly political. Her first novel, "The Grass is Singing" (1950), set out to depict the brutalities of colonialism, and while still a member of the Communist Party in the U.K., she was banned indefinitely from Southern Rhodesia (where she was raised) and South Africa.

But for most of her career, Lessing has espoused a politics of disavowal. In 1962, Lessing splashed onto the international literary scene with "The Golden Notebook," a disjointed, difficult door-stopper of a novel that sought to unify the divergent interests of a writer named Anna Wulf (a disguised Doris Lessing herself). In a black notebook, Anna records her memories of Central Africa, in a red one, her involvement with the British Communist party, and in a blue one she seeks to understand her dreams and ambitions, the subconscious terrain of psychoanalytic interest. The golden notebook of the title hopes to bring these divergent documents together, seeking to understand how women resolve the tensions between their personal experiences and their political interests. "The Golden Notebook" remains her most critically acclaimed novel, and it is the work the Swedish Academy seems most intent on celebrating through its award.

In interviews since the '60s Lessing has referred to this novel as her "albatross." Its success has haunted her career through subsequent years of much critical disapproval. But the political import of "The Golden Notebook" lies perhaps in its fundamental discomfort with political engagement itself. Ultimately Anna Wulf comes to the conclusion that the political questions that seemed so important at the outset of the novel seem empty by its end, in much the same way that Lessing's own involvement with communism came to be replaced first with Jungian psychoanalysis and later with Sufi mysticism. The novels that followed blazed a path through science fiction and fantasy - and thus the dimming of Lessing's literary star. Reviewing her 1979 novel "Shikasta" for the New York Review of Books, Gore Vidal suggested in a sarcastic way how low-brow and high-brow she can seem in these non-realist fictions. Lessing, he writes, "is making a continuum all her own somewhere between John Milton and L. Ron Hubbard." So was she praised and lampooned by the audience that once esteemed her.

If Lessing's political engagement - her willingness to protest specific injustices - has retreated, perhaps the legacy of her work resides in the glum belief that political movements rarely have the capacity to change everyday lives. Instead of writing more books like "The Golden Notebook" she has preferred, over the last thirty years, to write novels where women, cut off from the civilization they grew up in, must cope with post-state or post-apocalyptic realities. In "Memoirs of a Survivor" (1974), an unnamed narrator holed up in her apartment muses on the competing realities of a London ruled by teenaged street thugs and the mystical possibilities suggested by visions from behind her wallpaper. In so doing she straddles radically oppositional styles, and at the same time suggests a queer but not necessarily unfamiliar response to the experience of trauma.

Lessing's style has become increasingly catholic in her later years. With "The Good Terrorist" (1985) and "Love, Again" (1996), she has shown that she is still capable of writing the kind of social realism critics valued in "The Golden Notebook," while also darting off to explore the seams of a civilization destroyed by ecological destruction. If Lessing has not, as Pamuk has, challenged the Turkish government's refusal to acknowledge the Armenian genocide, or like Pinter made angry comments about the collaboration of British and American militaries in Iraq, she has nonetheless ridden a course toward making the realities of environmental disaster not just banner-speak but accessible through the stark description of a boy and girl walking through recently created deserts looking for scarce food and the possibility of shelter and safety ("Mara and Dann", 1999).

For better or worse, Ms. Lessing's selection, then, is absolutely in keeping with the political imperatives that seem to underlie the Swedish Academy's agenda. In fact if there is controversy in her win, the controversy exists largely in academic circles. When asked for his response to Lessing's win, Harold Bloom called it "pure political correctness." Although the New York Times' Michiko Kakutani is not alone among reviewers in characterizing Lessing's most recent works as "tendentious," "flat-footed" and "dreary," she cites this passage from Lessing's "Mara and Dann" to suggest how Lessing's political interests have over-determined the idea of the novel:

These were peoples who had no interest in the results of their actions. They killed out the animals. They poisoned the fish in the sea. They cut down forests, so that country after country, once forested, became desert or arid. They spoiled everything they touched. There was probably something wrong with their brains. There are many historians who believe that these ancients richly deserved the punishment of the Ice.

If the Swedish Academy has awarded Lessing based on the fact that she is "that epicist of the female experience, who with skepticism, fire and visionary power has subjected a divided civilization to scrutiny," then it is perhaps part of the bargain that she would have her missteps. In order to scrutinize, one must take risks, and if Lessing is political, her political significance as a writer is that she doesn't just throw stones. Instead she grapples. She makes her missteps, but at the end of the day she is still asking an all-important question - in an age that values the individual, how is the individual supposed to stem the tide of what appear to be the increasingly catastrophic forces that threaten our world?
By Dan Kellum
Reprinted with permission from the The Nation