The ability of America to try terror suspects was itself on trial today, as a Democratic Senator (and former prosecutor) argued the sentiments of a Republican Congressman who believes a courtroom is no place for an avowed mastermind of the 9/11 attacks.

Rep. Peter Hoekstra, R-Mich., said putting Khalid Sheikh Mohammed and four other terror suspects on trial in a federal court in Manhattan, as was announced this week by Attorney General Eric Holder, is a bad idea, tantamount to " ideology run wild.

"We're going to go back into New York City, the scene of the tragedy on 9/11. We're now going to rip that wound wide open, and it's going to stay open for, what - two, three, four years, as we go through the circus of a trial in New York City?" Hoekstra said today on CBS' "Face the Nation."

He said the defendants and their lawyers will "bring every motion forward that they can" to drag the trial out so they can be at center stage, and that their objective is to make the trial a propaganda show. "Obviously our Attorney General, our legal system, will try to keep it dignified and civil and bring some respect to it," Hoekstra said. "That's not what KSM is going to try to do. They'll do everything they can to disrupt it to make it a circus and allow them to use it as a platform to push their ideology."

Democratic Sen. Patrick Leahy, however, believes that putting those charged with attacking the United States on trial is the best way to show the world the strength of America.

"I think that Eric Holder, our Attorney General, is right; I think the president is right in holding the trials of these murderers in New York City," Leahy told Schieffer. "What we're saying to the world is, the United States acts out of strength, not out of fear.

"I was a former prosecutor. I'd like to just see them prosecuted, in the same way which we prosecuted Timothy McVeigh. We're not afraid to do that. We're the most powerful nation on Earth. We have a judicial system that is the envy of the world. Let's show the world that we can use that power."

Hoekstra said he would have preferred that the defendants be treated as other suspects will be, by going through a military tribunal, and argued that President Obama had not demonstrated why some detainees at Guantanamo will be tried before civilian judges and some before military courts.

"I would have put [KSM] through the military tribunal process," Hoekstra said. "We started that process. They pled guilty. Why won't the president take guilty for an answer and say, 'Now let's go to the sentencing phase'?"

[While military tribunal transcripts show Mohammed has said he was behind planning the 9/11 attacks, he said last year that he would plead guilty in a military court , which did not happen because some defendants were undergoing mental competency hearings.] 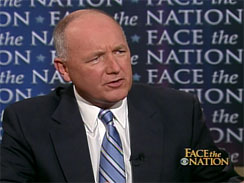 (CBS)
Hoesktra said giving the "extraordinary" protections of our legal system to those who, he says, "mocked the American system, who want to do everything that they can do to destroy it," is a bad decision. He also protested the Obama administration's decision to transfer detainees from the military prison at Guantanamo Bay to prisons on American soil.

"I'm all about problem-solving," said Hoekstra (left). "What problem is the president going to solve by moving these trials to New York or by moving Gitmo prisoners to Michigan, to Illinois, to Colorado? He hasn't outlined what problem he's solving. I don't see the problem of moving them from Gitmo. It's been a great place. We've been able to keep them there safely.

"Why move them into the United States while we are still under the threat from radical jihadists?"

When asked if he thought the trial might become a "circus," Leahy said, "I have a lot of faith in our judges. They know how to run the trial. They know how to keep decorum in their court. If Sheik Mohammed wants to stand up and say, as he did in Guantanamo, 'I committed all these murders and all these things,' if I was a prosecutor I would sit there and let that jury hear it.

"He's going to be convicted - that's the important thing. We show the world that our judicial system works."

"If somebody murders Americans, and they murder Americans in America, they ought to be prosecuted in America, hopefully convicted in America. I mean, if somebody comes into our country and murders somebody walking down the street, we're going to prosecute them here. It doesn't make any difference whether they're Americans or not. They committed a crime in America.

"We're not afraid of these people. We're ready to stand up to them. I don't think we should run and hide and cower. Let's use our system. Let's convict them."

"What if he should be acquitted?" Schieffer asked.

"I don't think he's going to be acquitted," he said. "I've discussed the evidence that's available. [Eric Holder's] got one of the greatest teams of prosecutors around him. I've gone over the case with him.

"I'd rather be the prosecutor than the defense counsel in this case," he added.