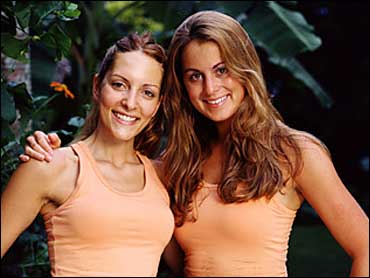 It was an all-out sprint to the finish that began in Highlands of Scotland and ended in Portugal. The final clue read to the teams were to "walk to the Pit Stop." Unfortunately, Heather Mahar and Eve Madison chose to take a taxi and got a 30-minute penalty that left them in last place.

So why did the Harvard Law School roommates disobey the instructions?

"Well, I guess at a crucial point, deciding as you saw to take a cab or to walk, it was indicated by our cameraman [that it was] OK to take a cab. We ended up taking the cab, and obviously, it ended up hurting us," says Eve on The Early Show.

The error by the production staff was not shown on the show, which must have been a bitter pill for the team to swallow.

"We hope that we were never bitter," says Heather. "We know it's a game. It was sad. We felt that we had the potential to go a lot further, but again, we know it was a game. The best thing about it was that we wanted to play the game very ethically as lawyers and human beings and came forward," says Eve.

When show host Phil Keoghan told Heather and Eve they were in first place, they knew something was amiss, so they did not wait for the tapes to be reviewed, and came forward admitting what had happened.

"A lot of the teams were surprised we'd come forward. Tape reviews for 48 hours. No one would have known that we had taken the cab because no one saw us. The cab went a different way than the runners went. We didn't see anyone and realized we were to walk," say Heather.

But the taxi ride was not their only vehicle trouble. While driving the streets of Portugal, Eve got into a fender bender.

"There were two stick shifts. We didn't know which one to use," says Eve. She had learned how to drive a stick only a few weeks before the race began, she explains.

Their clumsiness delayed the fireman and policeman team who, while stuck behind the lawyers, made fun of the girls' Harvard Law degrees.

"I called them last night, 'How dare you say that,'" jokes Eve.

"All in good fun," adds Heather. "Wonderful people. [They do] a lot of community work in their jobs. Just great people."

So how do Heather and Eve rate their experience?

"We met amazing people. Every team had a strength, something to teach you. It was great," says Heather.

"That's my favorite adjective, amazing. It was an amazing experience," adds Eve.