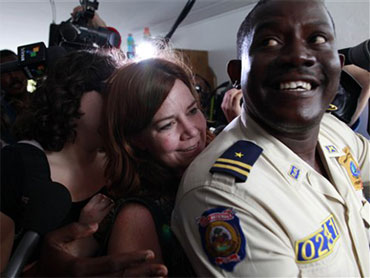 Ten Baptist missionaries are facing kidnapping charges in Haiti for trying to take 33 children out of the country, and the lawyer for all the defendants is putting the blame on the group's leader.

Attorney Edwin Coq said Laura Silsby knew the group couldn't remove the youngsters without proper paperwork, while he characterized the other nine missionaries as unknowingly being caught up in actions they didn't understand.

"I'm going to do everything I can to get the nine out. They were naive. They had no idea what was going on and they did not know that they needed official papers to cross the border. But Silsby did," Coq said Thursday after a magistrate charged the 10 at a closed hearing.

Silsby waved to reporters but declined to answer questions as the missionaries were taken back to the holding cells where they have been held since Saturday. Haitians left homeless by the Jan. 12 earthquake sat idly under tarps in the parking lot, smoke rising from a cooking fire.

Silsby had expressed optimism before the hearing. "We expect God's will be done. And we will be released," she told reporters.

Complete Coverage: Devastation in Haiti
Haiti Quake: How You Can Help

Family members of the Americans released a statement late Thursday saying they were concerned about their relatives jailed in a foreign country.

"Obviously, we do not know details about what happened and didn't happen on this mission," the statement said. "However, we are absolutely convinced that those who were recruited to join this mission traveled to Haiti to help, not hurt, these children."

A CBS News employee who witnessed Thursday's court proceedings says Silsby told the judge: "We were trying to do what's best for the children."

When the judge asked, "Didn't you know you were committing a crime?" Silsby quietly answered, "We are innocent."

But CBS News correspondent Bill Whitaker reports there are serious questions tonight about Silsby's motives. The 40-year-old business woman, who convinced members of Idaho's Central Valley Baptist Church to follow her dream of an orphanage in Haiti, has a troubling financial history.

She's been the subject of eight civil lawsuits, 14 for unpaid wages, Whitaker reports. Her Meridian, Idaho house is in foreclosure. She's had at least nine traffic citations in the last 12 years including four for failing to register or insure her car.

The Baptist group, most of whose members are from two Idaho churches, had said they were rescuing abandoned children and orphans from a nation that UNICEF says had 380,000 youngsters in that plight even before the quake.

But at least two-thirds of the children involved in the case, ranging in age from 2 to 12, have parents, although the parents of some told The Associated Press they gave them up willingly because the missionaries promised the children a better life.

The investigating judge, who interviewed the missionaries Tuesday and Wednesday, found sufficient evidence to charge them with trying to take the children across the border into the Dominican Republic on Jan. 29 without documentation, Coq said.

Each was charged with one count of kidnapping, which carries a sentence of five to 15 years in prison, and one of criminal association, punishable by three to nine years. Coq said the case would be assigned a judge and a verdict could take three months.

The magistrate, Mazard Fortil, left without making a statement. Social Affairs Minister Jeanne Bernard Pierre, who earlier harshly criticized the missionaries, declined to comment. The government's communications minister, Marie-Laurence Jocelyn Lassegue, said only that the next court date had not been set.

U.S. Ambassador Kenneth Merten showed up after 5 p.m. outside judicial police headquarters, where the defendants are being held.

"The U.S. justice system cannot interfere in what's going on with these Americans right now," Merten told reporters. "The Haitian justice system will do what it has to do."

Silsby had begun planning last summer to create an orphanage for Haitian children in the neighboring Dominican Republic. When the earthquake struck she recruited other church members, and the 10 spent a week in Haiti gathering children for their project.

Most of the children came from the ravaged village of Callebas, where people told the AP they handed over their children because they were unable to feed or clothe them after the quake. They said the missionaries promised to educate the children and let relatives visit.

Their stories contradicted Silsby's account that the children came from collapsed orphanages or were handed over by distant relatives.

She also said the Americans believed they had obtained in the Dominican Republic all the documents needed to take the children out of Haiti.

The Dominican consul in Haiti, Carlos Castillo, told the AP on Thursday that the day the Americans departed for the border, Silsby visited him and said she had a document from Dominican migration officials authorizing her to take the children from Haiti.

Castillo said he warned Silsby that if she lacked adoption papers signed by the appropriate Haitian officials her mission would be considered child trafficking. "We were very specific," he said.