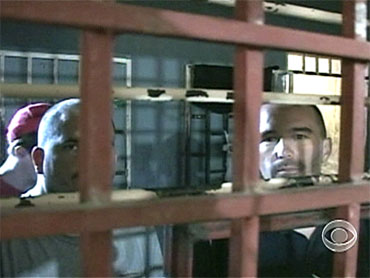 Ten members of a U.S. missionary group who said they were trying to rescue 33 child victims of Haiti's devastating earthquake were charged with child kidnapping and criminal association on Thursday, their lawyer said.

Edwin Coq said after a court hearing that a judge found sufficient evidence to charge the Americans, who were arrested Friday at Haiti's border with the Dominican Republic. Coq attended Thursday's hearing and represents the entire group in Haiti.

Complete Coverage: Devastation in Haiti
Haiti Quake: How You Can Help

Group leader Laura Silsby has said they were trying to take orphans and abandoned children to an orphanage in the neighboring Dominican Republic. She acknowledged they had not sought permission from Haitian officials, but said they just meant to help victims of the quake.

A CBS News employee who witnessed today's court proceedings says Silsby told the judge: "We were trying to do what's best for the children."

When the judge asked, "Didn't you know you were committing a crime?" Silsby quietly answered, "We are innocent."

But CBS News correspondent Bill Whitaker reports there are serious questions tonight about Silsby's motives. The 40-year-old business woman, who convinced members of Idaho's Central Valley Baptist Church to follow her dream of an orphanage in Haiti, has a troubling financial history.

She's been the subject of eight civil lawsuits, 14 for unpaid wages, Whitaker reports. Her Meridian, Idaho house is in foreclosure. She's had at least nine traffic citations in the last 12 years including four for failing to register or insure her car.

The children taken from the group, ranging in age from 2 to 12, were being cared for at the Austrian-run SOS Children's Village in Port-au-Prince on Wednesday.

The U.S. citizens, most of them members of an Idaho-based church group, were whisked away from the closed court hearing to jail in Port-au-Prince, the capital. Silsby waved and smiled faintly to reporters but declined to answer questions.

Coq said that under Haiti's legal system, there won't be an open trial, but a judge will consider the evidence and could render a verdict in about three months.

Coq said a Haitian prosecutor told him the Americans were charged because they had the children in their possession. No one from the Haitian government could be reached immediately for comment.

Each kidnapping count carries a possible sentence of five to 15 years in prison. Each criminal association count has a potential sentence of three to nine years.

Coq said that nine of the 10 knew nothing about the alleged scheme, or that paperwork for the children was not in order.

"I'm going to do everything I can to get the nine out," Coq said. That would still leave mission leader Laura Silsby facing charges.

State Department spokesman P.J. Crowley said in Washington the U.S. was open to discuss "other legal avenues" for the defendants - an apparent reference to the Haitian prime minister's earlier suggestion that Haiti could consider sending the Americans back to the United States for prosecution.

Several parents of the children in Callebas, a quake-wracked Haitian village near the capital, told The Associated Press Wednesday they had handed over their children willingly because they were unable to feed or clothe their children and the American missionaries promised to give them a better life.

Their accounts contradicted statements by Silsby, of Meridian, Idaho.

In a jailhouse interview Saturday, Silsby told the AP that most of the children had been delivered to the Americans by distant relatives, while some came from orphanages that had collapsed in the quake.

"They are very precious kids that have lost their homes and families and are so deeply in need of, most of all, God's love and his compassion," she said.

In Callebas, parents said a local orphanage worker, fluent in English and acting on behalf of the Baptists, had convened nearly the entire village of 500 people on a dirt soccer field to present the Americans' offer.

Isaac Adrien, 20, told his neighbors the missionaries would educate their children in the neighboring Dominican Republic, the villagers said, adding that they were also assured they would be free to visit their children there.

Many parents jumped at the offer.

Adrien said he met Silsby in Port-au-Prince on Jan. 26. She told him she was looking for homeless children, he said, and he knew exactly where to find them.

He rushed home to Callebas, where people scrape by growing carrots, peppers and onions. That very day, he had a list of 20 children.

As they loaded children onto a bus in Callebas on Jan. 28, the Americans took down contact information for all the families and assured them a relative would be able to visit them in the Dominican Republic.

The Americans' journey began last summer after Silsby and her former nanny, 24-year-old Charisa Coulter, resolved to establish an orphanage for Haitian children in the Dominican Republic. Coulter is among the jailed Americans.

They began buying up used clothing and collecting donations from their Central Valley Baptist Church in Meridian and in November, Silsby registered the New Life Children's Refuge Inc., the nonprofit organization coordinating the rescue mission. It listed the address of her now-foreclosed home in Meridian as its headquarters.

Then the quake hit. Silsby and Coulter moved into high gear, gathering donations and assembling a team to go into Haiti and urgently take out children, the younger woman's father, Mel Coulter, told the AP from his home in Kuna, Idaho.

The group packed 40 plastic bins of donated goods into a U-Haul trailer and drove to Salt Lake City on Jan. 22, where they took a flight to the Dominican Republic. They made their way to Haiti, where four days later, they were introduced to Adrien.

Adrien, who had served as the go-between and translator for the missionaries, said he had no knowledge of the group's larger plans; villagers said they were told none of their children would be offered for adoption.

A Haitian-born pastor who said he worked as an unpaid consultant for the group insisted the Baptists had done nothing wrong.

The Rev. Jean Sainvil said some of the children were orphans and might have been put up for adoption. Children with parents were to be kept in the Dominican Republic, and would not lose contact with their families, Sainvil said in Atlanta.

"Everybody agreed that they knew where the children were going. The parents were told, and we confirmed they would be allowed to see the children and even take them back if need be," he said.

Sainvil stressed that in Haiti it is not uncommon for parents who can't support their children to send them to orphanages.

Even Prime Minister Max Bellerive has said he recognized the Americans may simply have been well-meaning who believed their charitable Christian intent justified trying to remove the children from quake-crippled Haiti.

Only minutes before the charges, the Americans' Dominican lawyer, Jorge Puello, had said he expected at least nine of the 10 to be released and said he was arranging a charter flight for them from Santo Domingo, the Dominican capital.

After the Haitian lawyer's announcement, Puello could not be reached by telephone for comment.

"I'm at the airport (in Santo Domingo) and we're getting the plane ready. We're just waiting for the green light," Puello said. "I spoke to a source inside the jail - a government official - who said nine would be released but one would be held for further investigation."