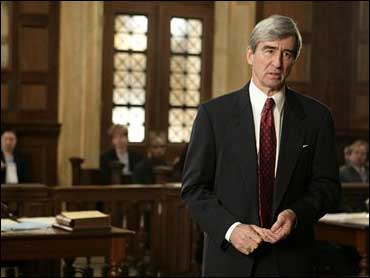 Prosecutor Jack McCoy is getting a promotion to district attorney on "Law & Order" but viewers could see less of Sam Waterston, the actor who plays him.

McCoy will take over from D.A. Arthur Branch, who was played by Fred Thompson. A former U.S. senator, Thompson asked to be released from the NBC drama as he weighs a bid for the Republican nomination for president.

Waterston will begin his 14th season as McCoy when the show returns in midseason. In past seasons, the district attorney's character generally has appeared in brief scenes offering counsel to the staff.

"It's premature to comment on any changes to the D.A.'s role as well as any story lines affecting the transition from Branch to McCoy," Pam Golum, a spokeswoman for series creator Dick Wolf, said Thursday.

In a statement Wednesday announcing his character's new job, Waterston called it a "logical next step" for McCoy.

"On the other hand, politics isn't his game. There'll be fireworks. I'm looking forward to it," the actor said.

"Law & Order" will begin its 18th season next year and is the second longest-running drama series ever, behind "Gunsmoke," which ran 20 seasons.