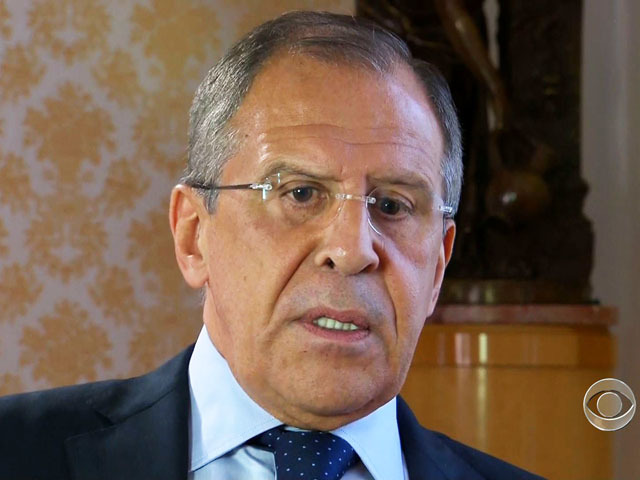 (CBS News) MOSCOW -- The dictatorship of Syrian President Bashar Assad has now taken several towns from rebels who rose up two years ago. The Obama administration is taking another look at arming the rebels.

The Assad regime has survived largely because of weapons supplied by its best ally, Russia. Foreign Minister Sergei Lavrov is the face of Russia's Syria policy.

CLARISSA WARD: You believe that President Assad should step down?

SERGEI LAVROV: This is not for me to decide. This is for the Syrian people to decide.

Since the conflict began more than two years ago, Russia has supplied the regime with political support and weapons that have ensured its survival.

LAVROV: We supply weapons to all those who contracted legally. And this is the universal rule.

WARD: Even if those weapons may be used to perpetrate war crimes?

LAVROV: I don't think you can perpetrate war crimes with defensive weapons, with air defense systems.

WARD: This is a request from a Syrian army general to a Russian arms supplier from March of this year: 20,000 AK-47s, 200,000 mortar rounds, grenade launchers, millions of rounds of ammunition --

LAVROV: Are we discussing --

WARD: These are not defensive weapons.

LAVROV: Are we discussing Syrian requests or the substance of the contracts which we honor? I think those are two different things. And you have to make a difference.

WARD: Were these weapons supplied?

LAVROV: I have not seen these requests, and this is not a contract to which we are committed.

Lavrov has condemned the West's support of the opposition, citing known ties to al Qaeda within some rebel groups.

LAVROV: I see double standards, if you wish. You either deny terrorists any acceptance in the international life, or you make your double standard policy work the way it has been working -- "I don't like that guy in this country, so we will be calling him a dictator and topple him. This guy in another country also dictatorial, but he's our dictator."

Lavrov says he still believes the war's end can be negotiated at a peace conference.

LAVROV: The government said they are ready. They said they have a delegation. We believe that the opposition must do the same as soon as possible.

Lavrov told us that war crimes must be investigated in due time, but that the priority now is to get both sides to the negotiating table and to stop the bloodshed. Justice, he said, can wait.