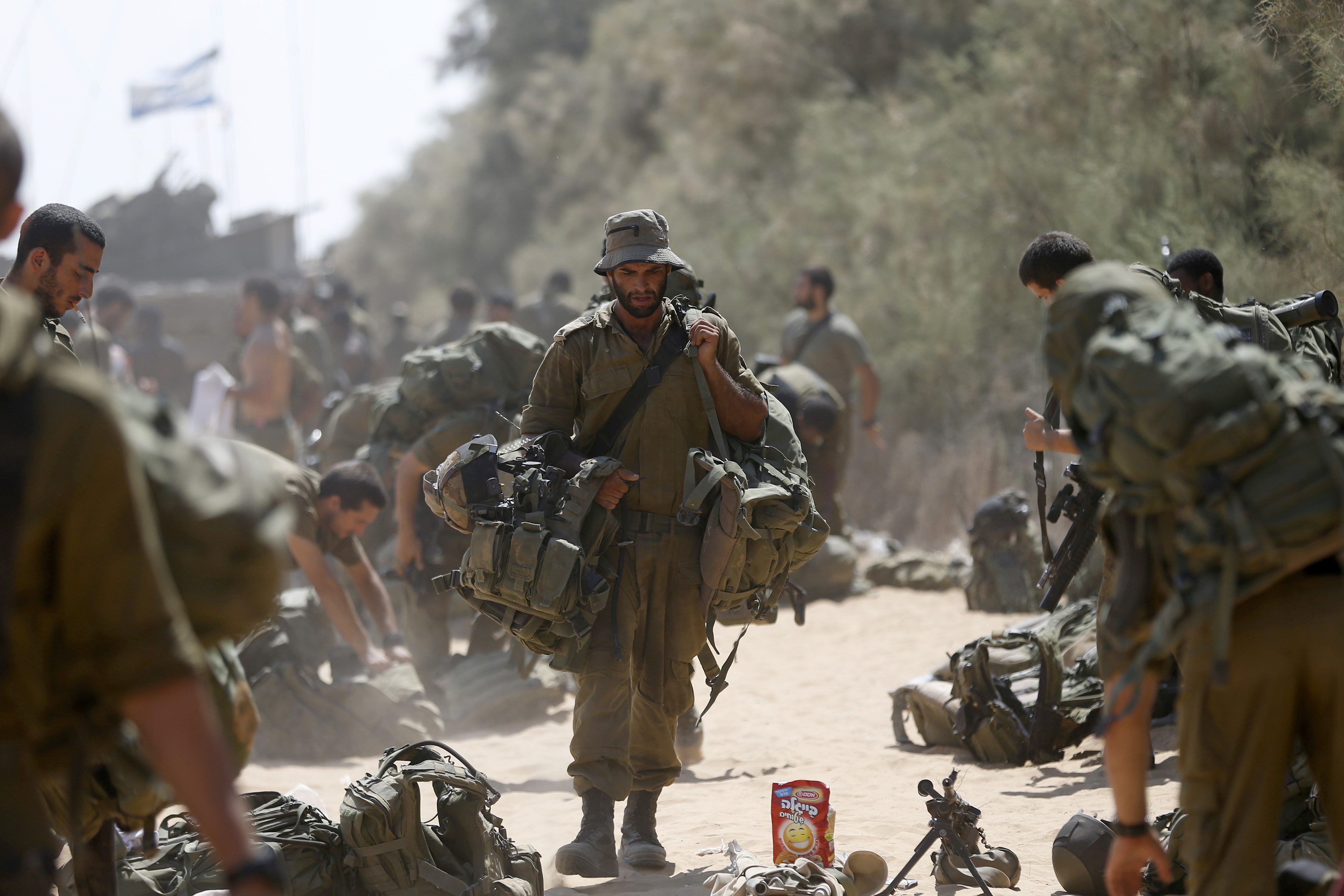 GAZA CITY, Gaza Strip - Israel said it withdrew the last of its ground forces from Gaza on Tuesday as it and Hamas began a temporary cease-fire. The calm sets the stage for talks in Egypt on a broader deal for a long-term truce and the rebuilding of the battered, blockaded coastal territory.

Both sides halted cross-border attacks as the three-day truce took effect at 8 a.m. (0500 GMT) Tuesday. The shelling stopped and in Gaza City, where streets had been deserted during the nearly monthlong war, traffic picked up and shops started opening.

If the calm holds, it would be the longest lull in almost a month of fighting that has killed nearly 1,900 Palestinians and 67 Israelis.

In coming days, Egyptian mediators plan to shuttle between Israeli and Palestinian delegations in Cairo to try to work out new arrangements for Gaza.

As details of the Palestinian demands emerged, there were some signs that Hamas is willing to give Palestinian President Mahmoud Abbas a role in Gaza as part of rebuilding efforts.

Hamas seized control of Gaza from Abbas' Palestinian Authority in 2007, prompting the Egyptian-Israeli blockade of the territory. Abbas' return would presumably aim to reassure Israel and Egypt, allowing an easing of the closure.

The Palestinian delegation in Cairo presented a joint list of demands to Egypt, said Hana Amireh, a West Bank-based PLO official who is in touch with the delegation.

The demands include a call for internationally funded reconstruction that would be overseen by an Abbas-led government that was formed in a unity deal with Hamas before the war.

The delegation is led by one of Abbas' confidants but includes members of Hamas and other factions.

Efforts are under way to arrange a pledging conference of donor countries in Norway at the beginning of September, Mohammed Mustafa, the West Bank-based deputy prime minister of the technocrat government, told The Associated Press that

However, Hamas official Izzat Rishq suggested that while the group is willing to let Abbas handle the fund-raising at the donors' conference, it will seek a role in reconstruction.

"We know that we have a national unity government that can handle the donors' conference and the rebuilding, but implementing it on the ground requires national cooperation," he told The Associated Press.

An Israeli government official said an Israeli delegation would attend the Cairo talks, but would not say when it was to arrive in the Egyptian capital. The official spoke on condition of anonymity because he was not authorized to discuss the issue with the media.

The situation on the ground remains volatile, and any cease-fire violation could quickly derail the Cairo talks. Gaps between the Israeli and Palestinian positions are wide, and it's not clear how much can be achieved once talks get under way.

Yossi Kuperwasser, a senior official in Israel's Ministry of Strategic Affairs, said Israel is willing to discuss an easing of Gaza border restrictions, but needs guarantees that Hamas will not be able to re-arm.

He said the international community "can have a role in securing the security arrangements that are going to be agreed upon in Gaza," including preventing the entry of goods that could be diverted by Hamas for military purposes.

If such arrangements are reached, "the international community (is) of course going to have a role in helping and financing the reconstruction of Gaza," he said.

Israel is concerned that Hamas would be able to restock its military arsenal if the borders are opened.

Over the years, Hamas has smuggled rockets and other weapons into Gaza through smuggling tunnels under the Gaza-Egypt border. The flow only halted after a new government in Egypt took over a year ago and destroyed the tunnels.

Israeli Prime Minister Benjamin Netanyahu has repeatedly raised the idea in recent days of disarming Hamas, with the help of the international community.

Hamas is deeply rooted in Gaza. Despite the blow to its fighting capabilities in the past month, Hamas has thousands of armed men under its command.

One of the hardest-hit areas of recent days was the southern Gaza town of Rafah, which had come several days of heavy Israeli shelling and airstrikes, starting Friday, after Israel suspected an Israeli soldier had been captured by Hamas. Israel later said the soldier was killed in battle that day.

"I never saw anything like this in my life," Tawfiq Barbakh, a 67-year-old father of 12, said of the Israeli shelling as he surveyed his badly damaged home. "I don't know how many shells landed every minute but it felt like 20 or 30."

The war began July 8, but was preceded by several weeks of tensions. The current round of confrontations began with the June 12 abduction-killing of three Israeli teens in the West Bank, blamed by Israel on Hamas, followed by the apparent revenge killing of a Palestinian-American teen, the roundup of hundreds of Hamas activists by Israel, and finally barrages of Gaza rocket fire on Israel.

Israel launched airstrikes it said were aimed at stopping the rocket fire. It expanded the operation July 17 by sending in ground forces in what it described as a mission to destroy a network of tunnels used to stage attacks.

The fighting has claimed nearly 1,900 Palestinian lives. The war has also left 67 dead on the Israeli side, all but three of them soldiers.

The U.N. and Gaza human rights groups monitoring the death toll have said more than 75 percent of those killed in Gaza were civilians.