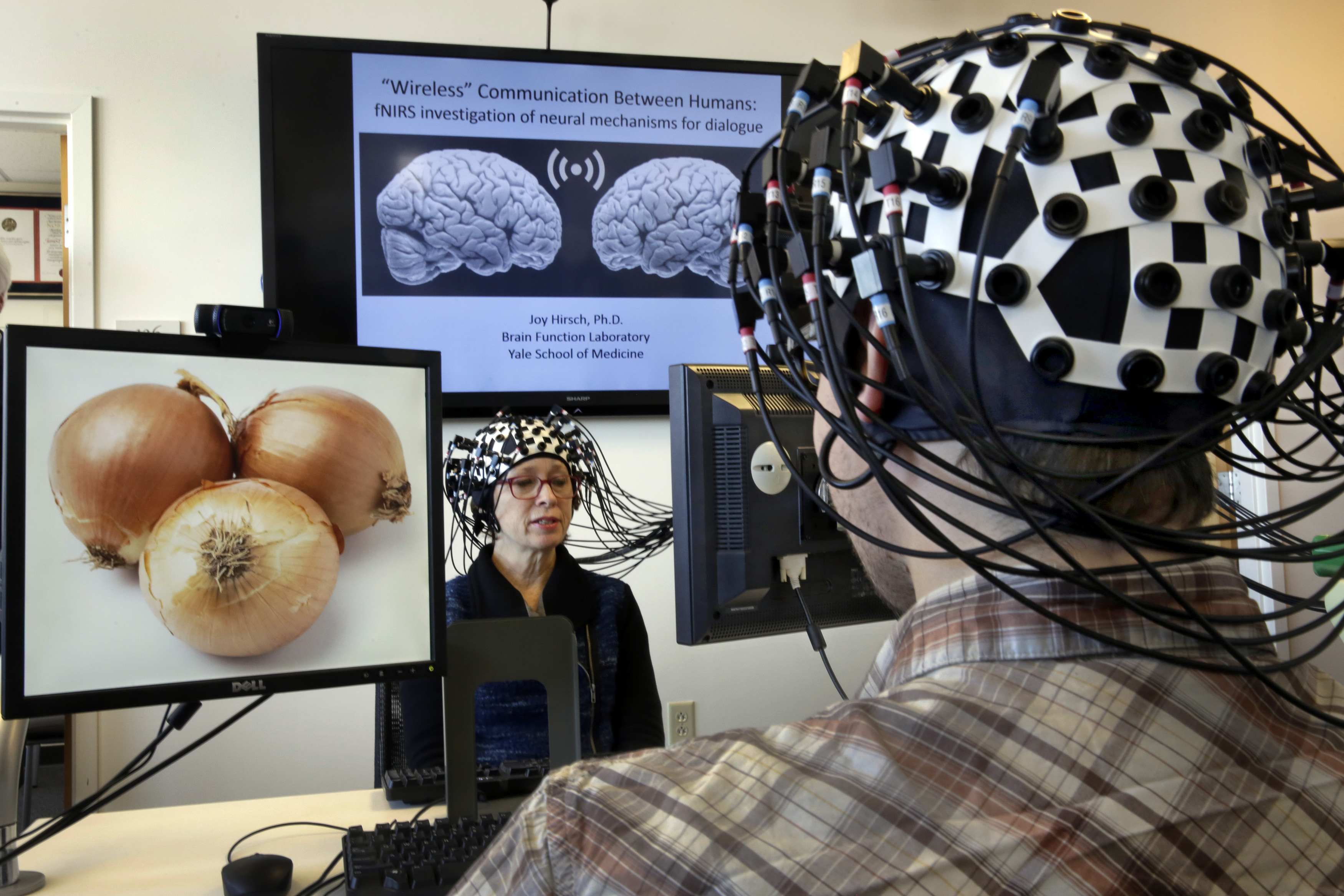 NEW HAVEN, Connecticut -- To the untrained eye, the graph looked like a very volatile day on Wall Street - jagged peaks and valleys in red, blue and green, displayed on a wall. But the story it told was not about economics.

It was a glimpse into the brains of Shaul Yahil and Shaw Bronner, two researchers at a Yale lab, as they had a little chat.

"This is a fork," Yahil observed, describing the image on his computer. "A fork is something you use to stab food while you're eating it. Common piece of cutlery in the West."

"It doesn't look like a real fancy sterling silver fork, but very useful," Bronner responded. And then she described her own screen: "This looks like a baby chimpanzee ..."

The jagged, multicolored images depicted what was going on in the two researchers' heads - two brains in conversation, carrying out an intricate dance of internal activity. This is no parlor trick. The brain-tracking technology at work is just a small part of the quest to answer abiding questions about the workings of a three-pound chunk of fatty tissue with the consistency of cold porridge.

How does this collection of nearly 100 billion densely packed nerve cells, acting through circuits with maybe 100 trillion connections, let us think, feel, act and perceive our world? How does this complex machine go wrong and make people depressed, or delusional, or demented? What can be done about that?

Such questions spurred President Barack Obama to launch the BRAIN initiative in 2013. Its aim: to spur development of new tools to investigate the brain. Europe and Japan are also pursuing major efforts in brain research.

The mysteries of this organ, which sucks up about 20 percent of the body's energy, are many and profound. But with a collection of sophisticated devices, scientists are peering inside the working brains of people for clues to what makes us tick.

At the Yale lab, Yahil and Bronner were demonstrating a technique being used there to investigate how our brains let us engage with other people.

That's one of the most basic questions in neuroscience, as well as an ability impaired in autism and schizophrenia, said lab director Joy Hirsch.

As the two researchers chatted, each wore a black-and-white skullcap from which 64 slender black cables trailed away like dreadlocks. At the tip of half of those fiber optic cables, weak laser beams slipped through their skulls and penetrated about an inch into their brains. There, the beams bounced off blood and reflected back to be picked up by the other half of the cables.

Those reflections revealed how much oxygen that blood was carrying. And since brain circuits use more oxygen when they're busier, the measurements provided an indirect index to patterns of brain activity as Bronner listened to Yahil and replied, and vice versa.

The mostly widely used brain-mapping technique, however, is a different one called functional magnetic resonance imaging, or fMRI. Basically, fMRI does what Hirsch's laser system does: It uses oxygen levels in blood as tracers of brain-cell activity. But it penetrates much deeper into the brain, using powerful magnetic fields. That lets it seek subtle magnetic signals to track blood oxygen levels on a tiny scale; a bump in oxygen levels indicates active brain cells nearby.

The fMRI technology can detect vanishingly tiny changes in brain activity that are associated with tackling particular tasks. And it can show the activity of a brain that is not focused on doing a task. In this resting state, the brain continues to hum along, and scientists are studying what this can reveal about it and its illnesses.

Another major emphasis in brain mapping these days is delineating the circuitry that lets the brain operate.

Communication flows along an estimated 150,000 miles of nerve fibers in the average brain. Individual fibers are too fine to see in brain-scanning machines, but they form bundles that can be detected as they cross the deep central portion of the brain.

Those bundles are one focus of researchers who are mapping out the brain's "connectome," the complex web of these connections between areas of gray matter, where thinking takes place. One goal is better understanding what parcels of tissue do what jobs in the brain's outer layer, the cerebral cortex.

Some brain-scanning research rises from the informative to the truly startling, like decoding - looking at brain activity patterns to figure out what somebody is seeing, or even thinking about.

In 2011, for example, researchers reported that they could reconstruct very rough visual replicas of movie clips that people were watching while their brains were scanned. And two years later, Japanese scientists reported evidence that they could get some idea of what people were dreaming about - at least, better than chance under highly controlled conditions.

Such findings are valuable for learning how the brain is organized. And in the near term, decoding technology might help people whose medical condition prevents normal conversation, said Jack Gallant of the University of California, Berkeley.

If portable devices that peer closely into the brain can be developed, new possibilities open up for brain decoding. And not just for scientists.

Gallant foresees a future in which composers write music just by imagining it. Or "you can just think about the picture you want to paint" and let a computer do the rest.

Writing a letter, he says "would be like dictation, except you would just be talking to yourself."

And in the future, why be confined to your own language?

"I can think in English and my little brain hat would read my thoughts, send it to Google and it would come back in Japanese," he says. "You'd talk out of a little speaker in your hat."