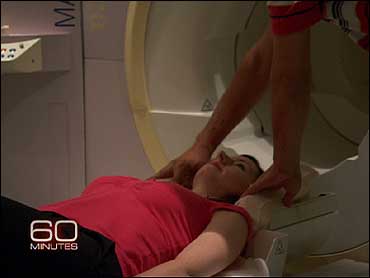 Here I was enclosed inside a giant multimillion dollar functional MRI machine. A magnet creating a magnetic field 60,000 times stronger than the earth's own magnetic field hummed around me as I stared up at a screen scarcely a foot from my face flashing drawings of igloos and corn on the cob. I knew I would have some unique experiences working at 60 Minutes but I never imagined I'd end up as a guinea pig in a science experiment that would be seen by millions of people. The experiment I volunteered for was research at Carnegie Mellon University to see if scientists could use fMRI scanning in conjunction with computer science to essentially read minds.

It all started on a phone call with Marcel Just, an enthusiastic neuroscientist from Carnegie Mellon who is working with computer science professor Tom Mitchell on experiments that they call "thought identification." Our correspondent Lesley Stahl would be interviewing them later that month for a story on "Mind Reading" so producer Shari Finkelstein and I were trying to map out how we'd demonstrate their research. Just and Mitchell had recently published an experiment where they had shown subjects five tools (like hammer and screw driver) and five dwellings (like igloo and castle) while recording their brain activity in the fMRI scanner. The computer was able to identify which object the subject was thinking about solely from their brain activation pattern.

Professor Just asked us, "What if we use someone from 60 Minutes as the subject in our experiment?" We agreed that it would be perfect to use Lesley Stahl as the subject. That way we'd know that the experiment was real and unrehearsed. We then upped the ante a little more and asked him, "Could you do it in real time?" Normally they would run the experiment, collect the data and analyze it days or weeks later but we wanted to get the results right away so we could film the entire process. Professor Just wasn't so sure it could be done but a few days later he called us brimming with excitement. Yes, they could do an almost instant analysis he said, and they would modify the experiment to include other objects besides just tools and dwellings to make it even more interesting for us. He emphasized that they'd never done anything like this before but if it worked it would be a truly amazing demonstration of the technology.

Before we could even ask Lesley if she wanted to be the subject in the experiment, she beat us to the punch. As we were giving her an overview of the story she interrupted, "Don't even think about putting me in a scanner. I hate getting MRIs." That left either Shari or me as the viable options. I volunteered. I had never had an MRI before and was intrigued to see what my brain looked like from the inside. Also Shari wanted to supervise the filming in the control room so I didn't really have much of a choice.

I wasn't nervous until the day of the scan. Then suddenly I was terrified. What if I couldn't keep my head still enough? What if the scanner found some tumor or abnormality in my brain? What if I let my mind wander when I was supposed to think a specific thought? The experiment could fail and it would be my fault.

Luckily there was so much to do surrounding the filming I didn't have much time to indulge my anxiety. First Lesley interviewed Marcel Just, then we quickly set-up in the tiny MRI control room to film the results of my brain scan. It was almost time for me to go in the scanner so the MRI technician asked me to remove all the metal on my body. The magnetic field in the scanning room is extremely powerful and will pull metal towards the center of the scanner potentially breaking the scanner and endangering you if you're inside of it. People with pace makers or metal plates in their bodies can't go near the scanner.

I removed my watch and jewelry and asked the technician whether I could wear my shoes. They were high heels and I wasn't sure if the heel contained metal. He touched my heel with a magnet and it didn't seem to be magnetized but suggested we try it out before we start filming to be sure. I walked into the scanner room and lay down on the MRI bed with my shoes on. I didn't feel any kind of pull on my shoes so I thought he was right, they must not be magnetic. I sat up, took my shoes off, and then stood up to talk to the technician with my shoes in my hands.

To watch Meghan getting prepped for the MRI and having her mind "read," click on the play button below:

Now I was only a few feet from the center of the MRI machine, putting my shoes much closer to the magnet. Suddenly one shoe got ripped out of my hand. It felt like someone had violently grabbed it from me and my first confused thought was that the technician had yanked it out of my hand. The next instant I heard a bang. My shoe had hit the side of the machine and when I looked over I saw my high heel eerily floating in midair in the center of the scanner. I started to say "what should I do?" but all I got out was "what" before I felt my other shoe get tugged. I held on tight to my remaining shoe with my right hand and quickly grabbed the floating shoe with my left hand and ran away from the scanner. Once safely back in the control room I said to the technician, "I guess that answers the question of whether I should wear my shoes." We both laughed, relieved that my high heels didn't break Carnegie Mellon's two million dollar machine.

After the shoe incident I felt more relaxed when it was time to go into the scanner for the experiment. I walked back into the room, this time in socks, put ear plugs in my ears and lay down on the scanner bed. I kept my eyes open as I slowly slid into the scanner. The technician had warned me beforehand that I might feel claustrophobic, and he wasn't exaggerating. I felt a wave of panic as my head entered the tight space in the center of the scanner. I tried to ignore my fear by concentrating on the small screen that looked way too close to my head. When the researcher asked if I was ready I tried to sound more confident than I felt when I responded yes.

The scanner started making loud clanging noises and the experiment was underway. A drawing of an object would appear before my eyes for several seconds and then an x would replace it on the screen. I had been instructed not to just look at the pictures but to think about the properties of each object shown. The experiment began with a drawing of a hammer, I thought about gripping the handle, the weight of the hammer, and the act of hammering. Then I was shown a picture of corn on the cob and I thought yellow, shucking the corn, and biting into corn on the cob. I continued like this for all of the ten objects. The pictures were then repeated.

Professor Just had told me that it was important to think about each object the same way each time I saw it. So when I saw hammer again I thought about gripping the handle, the weight of the hammer, and hammering. Being consistent in the way my mind was thinking in the scanner was more difficult than I imagined. In between images I was shown an x for a couple of seconds and I was supposed to clear my mind of the last image before I was shown the next one. It all happened so fast that I found it hard not to continue thinking about the previous image when the next image had appeared. My brain was saying, "did I think about a hammer the same way I did the first time I saw it... wait… stop… quit thinking about hammer quick think about corn." When I came out of the scanner I wasn't sure how my brain had done. I had tried my hardest but I was nervous that I wasn't the ideal subject and that my results would be inconsistent.

Within minutes the computer had analyzed my brain activity compared to other subjects and was ready to guess what I was thinking about. It was given a multiple choice question for each object. Just and Mitchell looked even more nervous than me when the results started to come in. But their smiles grew as did mine when the computer one by one correctly identified what objects I was thinking about in the scanner. I was amazed. I expected the computer to miss a few, but it didn't. It got them all right. This meant that my brain was thinking about a hammer in the same way that everyone else's brain thought about a hammer. Or at least our brain activation was similar enough that the computer could distinguish a hammer from, in my case, a barn. Before my eyes their experiment shed light on an age old question. Do we all think about things the same way? Is my blue the same as your blue? From what Just and Mitchell have shown it certainly seems like the answer is yes. Brain activity for everyday objects appears to be similar across people and their latest work is revealing incredible similarities in the way we think more abstract thoughts like love, kindness and hypocrisy.

I was struck by how simple the experiment was but how complex the implications of this research will be as it moves ahead. If a machine can accurately read your mind, what happens if it falls into the wrong hands? Will brain scans be admissible in court cases? Will we someday be able to use brain scanning for accurate lie detection? How might this technology allow disabled people who can't talk to communicate with their minds? As this technology continues to progress we'll have to grapple with the ethics of mind reading. But right now the technology still has a way to go and I for one am relieved that the scientists at Carnegie Mellon could only identify how I think about hammers, corn on the cob, and igloos. The rest I'd like to keep to myself.