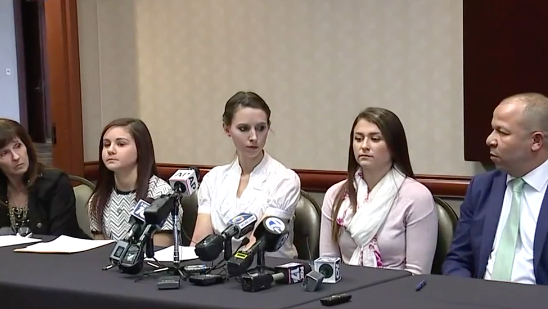 LANSING, Mich. -- Several gymnasts who accused a former doctor accused of molesting them while he worked for USA Gymnastics and Michigan State University (MSU) spoke out on Wednesday after he pleaded guilty to sex abuse charges.

Lindsey Lemke said she first heard about the investigation into Dr. Larry Nassar during a college gymnastics practice. She said she didn't realize at that point that his conduct had affected others stretching back many years. Lemke said she tried to notify her coach, Kathie Klages, that she had been victimized by Nassar, but Klages defended him.

"I went to her with something that was going to change my life forever," Lemke said. "And she still defended the person who did it to me."

Klages was subsequently suspended in February.

"It's very sad to think about the fact that you work your entire life to be a college athlete and you sacrifice so much," Lemke continued. "Especially being a club gymnast, you were coached by fear, and you would leave practice in pain, and you would be scared of that because if you knew you couldn't do gymnastics the next day, you were going to get yelled at."

According to Lemke, Nassar took advantage of the fact that he knew the gymnasts needed his help to mend their injuries to continue participating in the sport.

During the news conference, Rachael Denhollander -- who filed a police report detailing sexual misconduct involving Nassar -- said she was silenced, along with her teammates, by the gymnastics leadership organizations.

"We were silenced, we were mocked, and our abuser was told time and time again, 'I'm on your side,'" Denhollander said. "Today stands as a stark and painful reminder that while my predator has been stopped, the culture has yet to end."

"To the leadership at these organizations, you repeatedly claim that abuse has no place on campus, but you have failed to hold anyone accountable for allowing a pedophile to flourish for decades," she continued. "You claim you are deeply sorry for what we have gone through, but you have not listened to one word we have said. You have turned a deaf ear to everything we have said."

Denhollander spoke to CBS News' Jericka Duncan after the verdict.

"Larry's been taken care of hopefully forever, but USAG and MSU haven't, and until those dynamics change we're going to continue seeing the same story with different actors every time," she said.

"He's a consummate narcissist, he's a manipulator, he's an abuser and he will take every opportunity to shift attention to himself to make himself look less evil," she said.

Kaylee Lorincz said she was sexually assaulted by Nassar on her 13th birthday. Her identity was withheld for many years, but now she is speaking out against her abuser.

"I didn't realize the impact it had on me until I reported it to Michigan State police," Lorincz said. "It makes me angry and upset."

In a written statement, MSU said Nasser's guilty plea "represents another important step toward justice for the victims. As [MSU] President Simon has said, we recognize the pain sexual violence causes and deeply regret any time someone in our community experiences it. It takes tremendous courage for victims of sexual violence to come forward."

The Michigan criminal cases filed against Nassar followed reports last year in the Indianapolis Star about how USA Gymnastics, which trains Olympians, mishandled complaints about sexual misconduct involving the doctor and coaches. Women and girls said the stories inspired them to step forward with detailed allegations of abuse, sometimes when their parents were in the exam room at Michigan State.

During a hearing on Wednesday, Nassar admitted to abusing seven girls. He agreed that his conduct had no legitimate medical purpose and that he did not have the girls' consent.

The girls testified that Nassar molested them with his hands, sometimes when a parent was present in the room, while they sought help for gymnastics injuries.

Nassar has pleaded guilty to multiple charges of sexual assault. Sentencing has been scheduled for Jan. 12, 2018. He will face at least 25 years in prison.

Nassar lost his license to practice medicine in April.