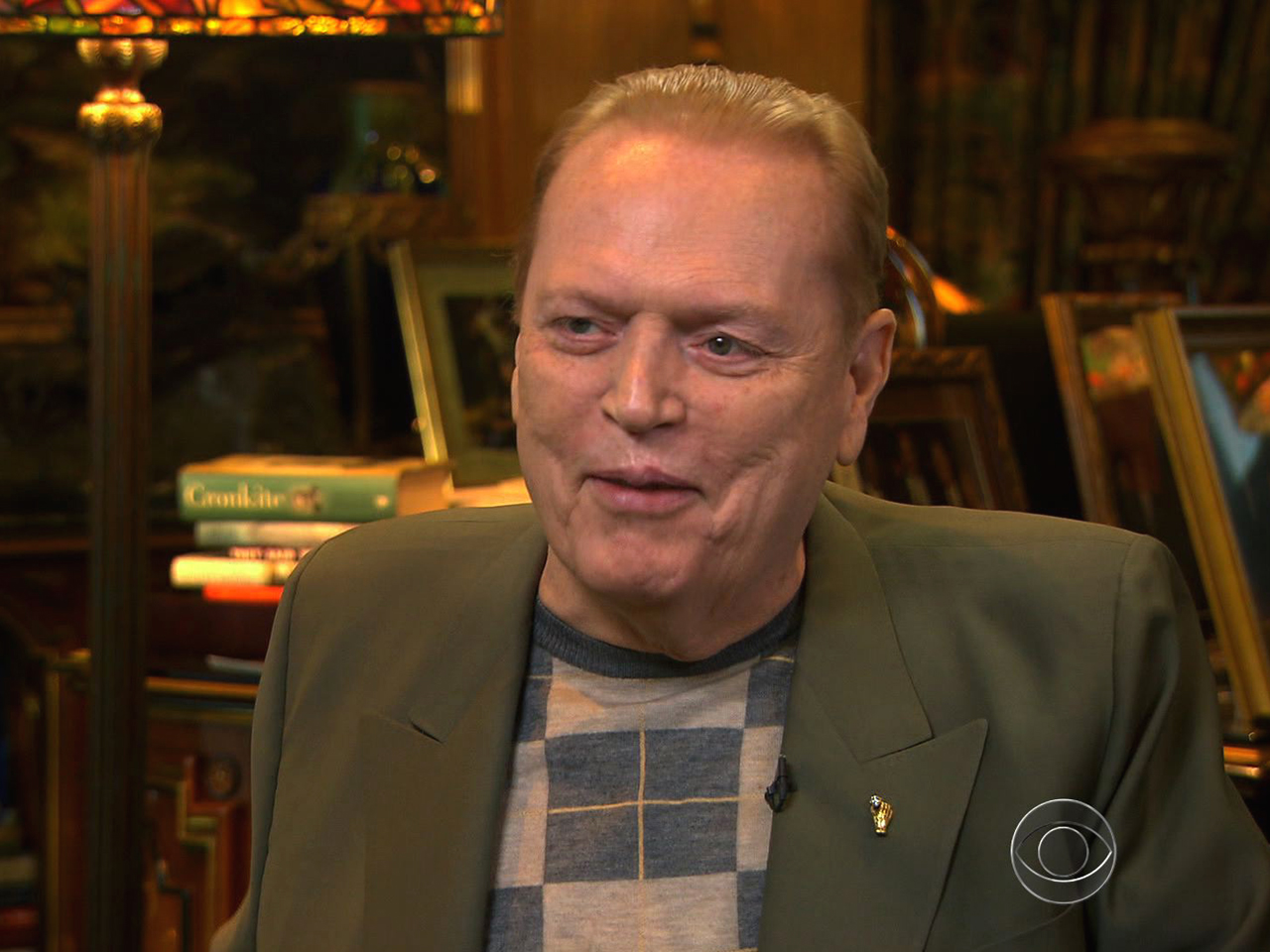 Anyone who knows the name Larry Flynt is likely to remember the 1978 shooting that left him paralyzed. And many have long since formed an opinion of the man — and of the magazine he created that made him famous (some would say notorious). Erin Moriarty of "48 Hours" now with a Sunday Profile:

Offensive. Obnoxious. Outrageous. These are just some of the adjectives that come to mind when describing Larry Flynt and Hustler, the magazine he began publishing 40 years ago.

Today, with the Internet, anybody can be a pornographer. Technology, it seems, has accomplished what religious leaders and prosecutors never could: the demise of Hustler magazine.

"Would it be very difficult for you, since you made your name off Hustler magazine, to have to shutter it, to actually stop publishing it?" Moriarty asked.

"I treat Hustler the same way as I would if it was a jar of peanut butter or a can of green beans," Flynt replied. "You know, it's a product, and when you are not making money, you've got to move on."

"Had I known that casinos would be as lucrative as they were, I would have gotten into them long before I did," he said. "It's been very profitable."

Oh, it's been profitable, alright. Flynt Productions is a privately-held company, so records aren't public, but Flynt claims to be worth half a billion dollars.

And he's not turning his back on the business that made him infamous. He plans to have a virtual version of Hustler online in a month. Flynt also produces adult videos and runs retail stores — and the man once accused of exploiting women is now catering to them.

"Twenty-five, 30 years ago, pornography was a men's business," he said. "People who would shop in sex shops before were male, not female. But everything changes. Women are getting in the game."

At 71 years old, Flynt's speech is less steady. He is no longer the bombastic, defiant defendant portrayed by Woody Harrelson in the 1996 film, "The People vs. Larry Flynt."

Throughout the 1970s and '80s, when prosecutors repeatedly dragged him into court, he turned trials into media events.

"What do you think when you look back at that side of you?" Moriarty asked.

"Would I do all that stuff over again? Of course not," Flynt replied. "But I'm glad I did it. Hell, yes."

Through it all, Flynt — who has an eighth-grade education — became an unlikely champion of the Constitution.

"But you became a First Amendment expert not because you believe in the Constitution — you were trying to save your business, right?" asked Moriarty.

"Well, I have been accused of hiding behind the First Amendment. I'm just thankful it's there to hide behind. That's what it's for, you know?"

Flynt's most significant legal victory came in 1988. Reverend Jerry Falwell, the televangelist and founder of the Moral Majority, sued after Flynt parodied him in Hustler. The case went all the way to the U.S. Supreme Court. In a unanimous decision, the Justices called the work political satire and ruled in Flynt's favor.

"The fact that society may find speech offensive," wrote Chief Justice William Rehnquist, "is not sufficient reason for suppressing it."

"You pay a price for everything," he replied, "and the price you pay to live in a free society is toleration. You have to tolerate things you don't necessarily like so you can be free. I have to tolerate Fox News, including that Archie Bunker O'Reilly over there, you know?"

Flynt himself paid a big price for his right to offend. On March 6, 1978, while on trial in Georgia for obscenity, he was shot outside the courthouse.

"It changed my life," he said. "But you know, I've never been a person to dwell on things I can't change."

Joseph Paul Franklin, a violent career criminal, was never charged, but later claimed responsibility for the shooting, reportedly saying that he took offense at a picture of an interracial couple that appeared in Hustler magazine.

Moriarty asked, "Do you wish you hadn't been in this business? Because you probably wouldn't have gotten shot if you had been in a different business."

"Well, I don't think about that," he responded.

Nearly half of his management team are women, including his fifth wife, Liz, who heads up the talent department (meaning she selects the women who appear in Hustler). And there's his daughter, Theresa, the only one of his five children who works for him.

Moriarty asked, "Is there ever anything he's done that you said, 'Oh, don't do that Dad? Don't do this?'"

Yes, Theresa replied. "When he offered Casey Anthony money to pose for the magazine."

Theresa Flynt says she didn't want to enrich the young Florida woman charged with killing her daughter: "A lot of us said that was ridiculous."

Her father laughed: "You know, that's right. She says, 'Dad! Is there anything you won't do?' I said, 'Teresa, the bar is pretty low.'"

By the way, Casey Anthony turned down the half-million dollar offer.

In recent years, Flynt has made amends with many former foes. In fact, before Reverend Falwell's death in 2007, the two men became friends, and even appeared publicly together.

And last fall, Flynt — who wants the death penalty abolished — shocked some people when he fought to halt the execution of a man in Missouri, Joseph Paul Franklin ... yes, the same man who shot Flynt 35 years ago. Franklin, on death row for an unrelated murder, was put to death last November.

"We get so caught up in the emotions of the death penalty that we can't understand as human beings that what we're doing is wrong and we don't have the right to be killing other people — not sanctioned by the state, anyway," Flynt said.

You can call Flynt outspoken ... outrageous ... even obnoxious He's fine with that. Just not ordinary.

"Well, the last thing in the world that I want to be: legitimate," he told Moriarty. "You know, all my fans would desert me.

"You need to get people's attention, and I'm pretty good at that."