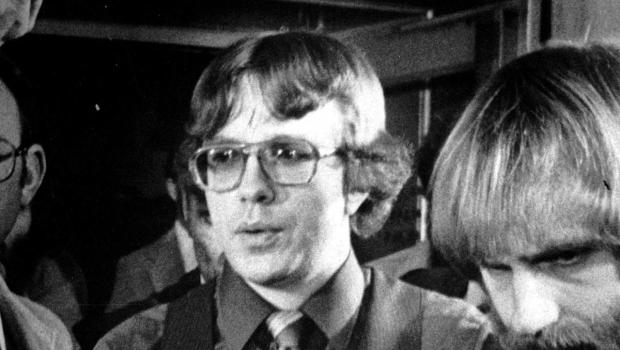 BONNE TERRE, Mo. -- Joseph Paul Franklin, a white supremacist who targeted blacks and Jews in a cross-country killing spree from 1977 to 1980, was put to death Wednesday in Missouri, the state's first execution in nearly three years.

Franklin, 63, was executed at the state prison in Bonne Terre for killing Gerald Gordon in a sniper shooting at a suburban St. Louis synagogue in 1977. Franklin was convicted of seven other murders and claimed responsibility for up to 20, but the Missouri case was the only one that brought a death sentence.
Mike O'Connell, a spokesman for the Missouri Department of Corrections, said Franklin was pronounced dead at 6:17 a.m.
The execution began more than six hours later than intended, and it took just 10 minutes.
Franklin declined to make a final statement. Wearing black rimmed glasses with long hair tucked behind his ears, he swallowed hard as five grams of pentobarbital were administered. He breathed heavily a couple of times then simply stopped breathing.
Guards closed the curtains to the viewing area while medical personnel confirmed Franklin was dead.
"The cowardly and calculated shootings outside a St. Louis-area synagogue were part of Joseph Paul Franklin's long record of murders and other acts of extreme violence across the country, fueled by religious and racial hate." Gov. Jay Nixon said in a statement read to reporters by George Lombardi, director of the Department of Corrections, after the execution.
Franklin's lawyer had launched three separate appeals: One claiming his life should be spared because he was mentally ill; one claiming faulty jury instruction when he was given the death penalty; and one raising concerns about Missouri's first-ever use of the single drug pentobarbital for the execution.
But his fate was sealed early Wednesday when the U.S. Supreme Court upheld a federal appeals court ruling that overturned two stays granted Tuesday evening by district court judges in Missouri.
The rulings lifting the stay were issued without comment.
Franklin, a paranoid schizophrenic, was in his mid-20s when he began drifting across the country. He bombed a synagogue in Chattanooga, Tenn., in July 1977. No one was hurt, but soon, the killings began.
He arrived in the St. Louis area in October 1977 and picked out the Brith Sholom Kneseth Israel synagogue from the Yellow Pages. He fired five shots at the parking lot in Richmond Heights after a bar mitzvah on Oct. 8, 1977. One struck and killed Gerald Gordon, a 42-year-old father of three.
Franklin got away. His killing spree continued another three years.
Several of his victims were interracial couples. He also shot and killed, among others, two black children in Cincinnati, three female hitchhikers and a white 15-year-old prostitute, with whom he was angry because the girl had sex with black men.
He finally stumbled after killing two young black men in Salt Lake City in August 1980. He was arrested a month later in Kentucky, briefly escaped, and was captured for good a month after that in Florida.
Franklin was convicted of eight murders: two in Madison, Wis., two in Cincinnati, two in Salt Lake City, one in Chattanooga, Tenn., and the one in St. Louis County. Years later, in federal prison, Franklin admitted to several crimes, including the St. Louis County killing. He was sentenced to death in 1997.
He also admitted to shooting and wounding civil rights leader Vernon Jordan and Hustler magazine publisher Larry Flynt, who has been paralyzed from the waist down since the attack in 1978.
"Mr. Flynt is not doing any interviews this morning, but says, 'I will always be opposed to the death penalty,'" Arthur Sando, a spokesman for Flynt, said in a statement to CBS News.
In an interview with the St. Louis Post-Dispatch on Monday, Franklin insisted he no longer hates blacks or Jews. While he was held at St. Louis County Jail, he said he interacted with blacks at the jail, "and I saw they were people just like us."
He has made similar statements to other media but has denied repeated interview requests from The Associated Press. Franklin's attorney Jennifer Herndon said his reasoning exemplified his mental illness: He told her the digits of the AP's St. Louis office phone number added up to what he called an "unlucky number," so he refused to call it.