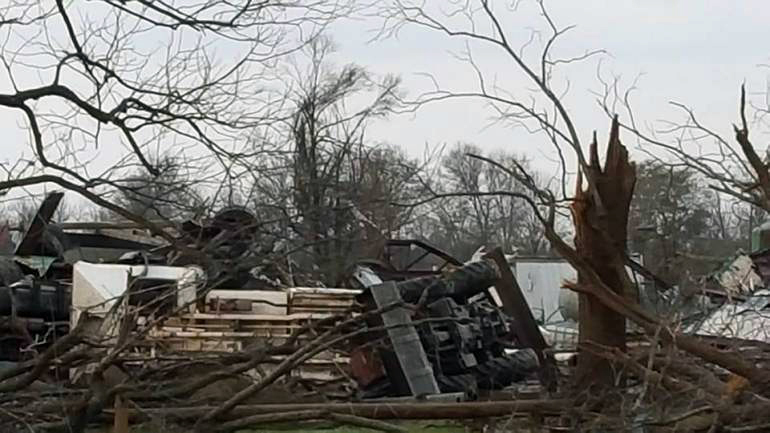 At least eight people, including a child, were reported killed and several other people critically injured Wednesday as severe weather threatened nearly a third of the country.

CBS affiliate WREG in Memphis reported a seven-year-old boy was killed when a tornado touched down in Holly Springs, Mississippi. Marshall County Coroner James Anderson said the child was inside a car with relatives when the storm picked up and tossed the vehicle.

He could not say how many others were in the car, but noted all were taken to a nearby hospital for treatment. He did not have any further details about their conditions.

A second person's death was also blamed on the tornado in Marshall County, authorities said.

Benton County Sheriff A.A. McMullen confirmed to CBS News that three people in that county were killed as a result of the storms. At least 40 other people were reportedly hurt across northern Mississippi.

Tennessee Emergency Management Agency spokesman Dean Flener told CBS News late Wednesday a man and a woman were killed in Perry County. TEMA declared a Level III State of Emergency due to damage and injuries in several counties of west and central Tennessee.

One death was reported in Arkansas.

Storm Prediction Center meteorologist Matt Mosier said a preliminary report shows that there were 14 tornadoes to touchdown in Mississippi. Tornado watches and warnings had been issued in at least ten states.

A large tornado plowed through Clarksdale, Mississippi and appeared to be on the ground for about ten minutes, toppling a tractor trailer onto its side and destroying homes.

Clarksdale Mayor Bill Luckett said the only confirmed casualty was a dog killed by storm debris, but as many as 20 homes may have been hit Wednesday.

Luckett said the town is opening its civic center to offer shelter for anyone who needs it. The storm also wreaked havoc at a small airport where planes were overturned.

"I'm looking at some horrific damage right now," the mayor said. "Sheet metal is wrapped around trees; there are overturned airplanes; a building is just destroyed."

In Como, Mississippi, Frances May said the storm didn't seem very violent when it passed a couple of miles from her home, yet she later saw the remains of three or four homes that were destroyed.

"There are some houses that were blown away," said May, who runs the Como Inn. "They were brick houses on a slab. The roofs came off and most of the walls are gone."

The damage was very isolated, she said: Diners were still eating at a downtown steakhouse in the tiny town just a few miles from the devastation.

The severe weather turned deadly earlier Wednesday when a tree blew over onto a house in Arkansas, killing an 18-year-old woman and trapping a one-year-old child inside, authorities said. Rescuers pulled the toddler from the home and took the child to the hospital.

The biggest threat for tornadoes was in a region of 3.7 million people in Mississippi, Tennessee and Arkansas and parts of Missouri, Illinois and Kentucky, according to the national Storm Prediction Center in Oklahoma.

The greatest risk for a few "intense, long-tracked tornadoes" will be through Wednesday night. Television images showed the tornado in Mississippi appeared to be on the ground for more than 10 minutes.

About 120 miles east of the tornado, Brandi Holland, a convenience store clerk in Tupelo, Mississippi, said people were reminded of a tornado that damaged or destroyed more than 2,000 homes and businesses in April 2014.

"They're opening all our tornado shelters because they say there's an 80 percent chance of a tornado today," Holland said.

Elsewhere, skiers on the slopes out West got a fresh taste of powder and most people in the Northeast enjoyed spring-like temperatures as they finished up last-minute Christmas shopping.

"It's too warm for me. I don't like it. I prefer the cold in the winter, in December. Gives you more of that Christmas feel," said Daniel Flores, a concierge from the Bronx, his light jacket zipped open as he shopped in Manhattan with his three children.

Only about half of the nation, mostly in the West, should expect the possibility of a white Christmas.

Across Mobile Bay in the small town of Loxley, Mandy Wilson watched the angry gray sky and told drivers to be careful as she worked a cash register at Love's Travel Stop.

"It's very ugly; it's very scary," Wilson said. "There's an 18-wheeler turned over on I-10. There's water standing really bad. It's a really interesting way to spend Christmas Eve eve."

In parts of Georgia, including Atlanta, a flood watch was posted through Friday evening as more than 4 inches was expected, the National Weather Service said.

The threat of severe weather just before Christmas is unusual, but not unprecedented, said Greg Carbin, a meteorologist at the national Storm Prediction Center. On Christmas Day in 2012, a storm system spawned several tornadoes, damaging homes from Texas to Alabama.

"If you go through these neighborhoods, there are a lot of people very proud of what they've put out and they've got stuff everywhere -- all these ornaments and deer and everything else," Clements said. "They're not manufactured to withstand that kind of wind speed, so they become almost like little missiles."

In Arkansas, Pope County Sheriff Shane Jones said the 18-year-old woman was killed when a tree crashed into her bedroom. The woman and her 1 ½-year-old sister were sleeping in a bedroom of the house near Atkins about 65 miles northwest of Little Rock, when winds uprooted the tree that crashed through the roof.

"It's terrible that this happened, especially at Christmas," Jones said.

Once the strong storms clear out, warm temperatures are expected. Highs in Atlanta and Charlotte, North Carolina, on Christmas Eve were forecast to be in the mid-70s.