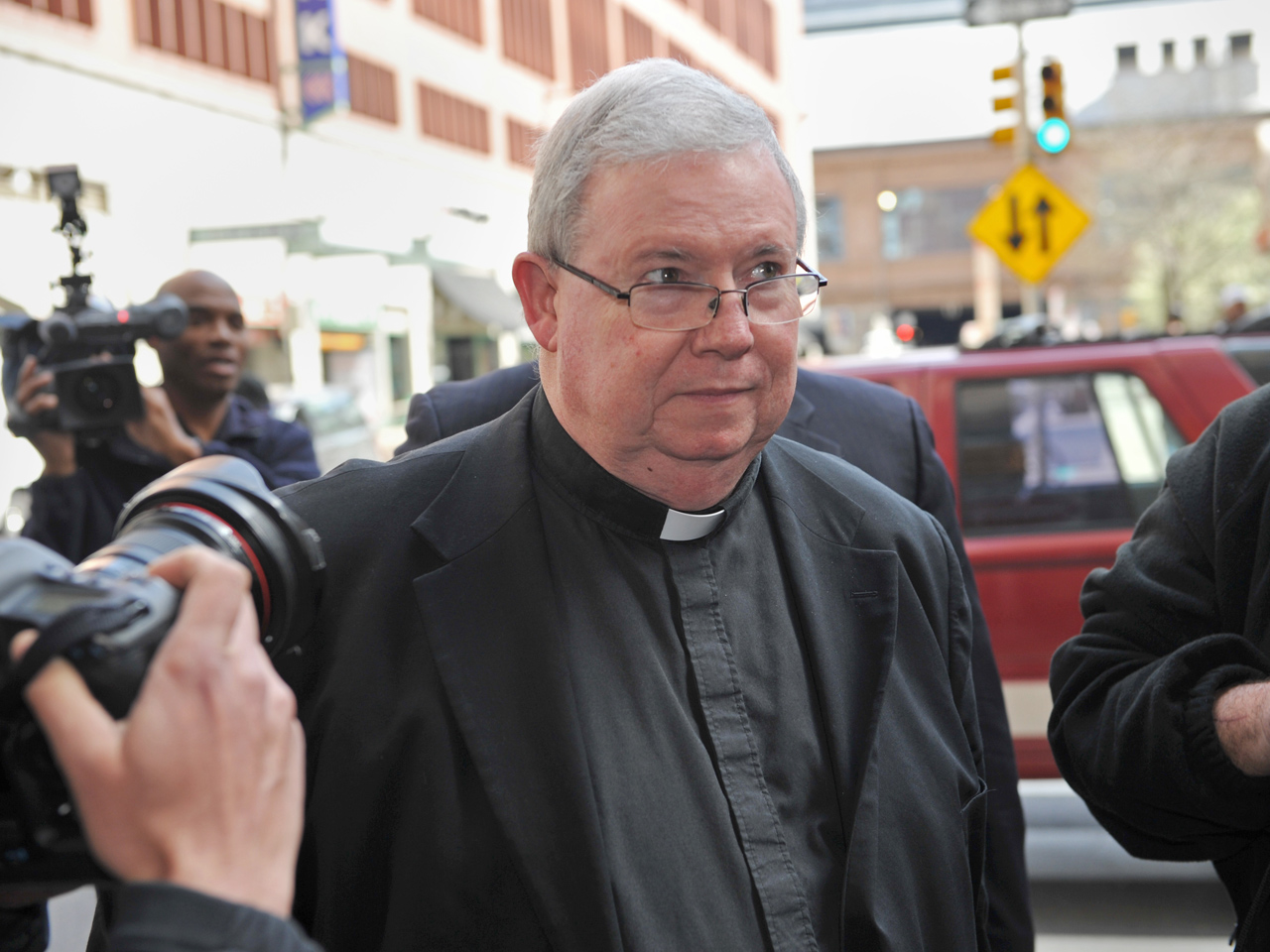 (AP) PHILADELPHIA - A landmark church sex abuse case that rocked the Roman Catholic Church went to trial Monday, marking the first time a U.S. church official faced a jury on allegations he endangered the welfare of children by covering for predator priests inside the Archdiocese of Philadelphia.

The high-ranking monsignor who's on trial "won't run" from the Catholic Church's sex abuse crisis, his lawyer said as the landmark child endangerment trial began.

Monsignor William Lynn supervised more than 800 priests as the secretary for clergy in Philadelphia from 1992 to 2004. He's the first U.S. church official charged over his handling of abuse complaints.

Prosecutors charge that he kept dangerous priests in parish work around children to protect the church's reputation and avoid scandal.

Defense lawyer Thomas Bergstrom said in opening statements: "There is documentary evidence that the sexual abuse of children happened in the Catholic Church. We're not going to run from that. He (Lynn), perhaps alone, is the one who tried to correct it."

Bergstrom said his client had prepared a list of 35 accused priests in 1994, based on his review of secret archives kept in a locked room at the archdiocese's headquarters. Lynn gave the list to Cardinal Anthony Bevilacqua and other superiors, but Bevilacqua had it shredded, Bergstrom said.

A copy was found in 2006 in a locked safe at the archdiocese and was turned over by a church lawyer this year. The document is something of a smoking gun in the case, although each side hopes to spin it its way.

Defense lawyers say the document shows Lynn trying to assess the scope of the problem. Prosecutors say it shows the church was mostly concerned about legal liability. The list notes whether the statute of limitations had run in each case.

According to prosecutors, the church kept secret files dating to 1948 that show a long-standing conspiracy to doubt sex abuse victims, protect priests and avoid scandal.

Assistant District Attorney Jacqueline Coelho called the case "a battle between right and wrong within the archdiocese and the office of secretary for clergy."

Lynn, 61, appears solemn in court, where he has spent much of the past few months attending pretrial hearings and jury selection. He has been under investigation for eight years, through two city grand jury investigations. The grand juries blasted Bevilacqua and his successor, Cardinal Justin Rigali, saying they covered up child sex complaints lodged against more than 60 priests. But Lynn was the only supervisor charged.

The cardinal died in January, although the jury might see the videotaped deposition he gave weeks earlier. The trial could last several months.

Lynn is on trial with the Rev. James Brennan, who is charged with raping a 14-year-old boy in 1996. Both men entered not guilty pleas Monday.

Defense lawyers have long planned to attack the credibility of the two accusers, who have struggled with drug addiction and have criminal records. But that strategy took something of a hit when a third co-defendant, defrocked priest Edward Avery, entered a surprise guilty plea to some of the charges Thursday.

Avery, who moonlighted as a disc jockey and adopted six Hmong children during his years in the priesthood, admitted that he sexually assaulted a 10-year-old altar boy in a church sacristy in 1999. That victim accused another priest and his sixth-grade teacher of raping him during his parochial school years. They will go on trial separately because neither was an archdiocesan priest reporting to Lynn.

Brennan's accuser has convictions for theft and filing a false police report and called none other than the person he accused of abusing him when he needed to do court-ordered community service, a defense lawyer said.

"If you don't believe (him), ... the case is over," said lawyer William Brennan, who is not related to his client.

Avery's plea also acknowledged that the archdiocese kept him in ministry despite being aware of an earlier complaint. That complaint, dating to 1992, was detailed in court Monday by the first trial witness. A Philadelphia detective read a 1992 letter from a medical student that said Avery had once gotten him drunk and molested him after a DJ stint at a West Philadelphia nightclub and later on a ski trip.

"I do not want money or any kind of media scandal," the accuser wrote. "I need to know that he has been evaluated and treated for this disorder and his threat to other impressionable young men is gone."

The archdiocese interviewed Avery, who denied the allegations before saying they could have happened when he was drunk.

"I thought he was a potential (priest). I was so good to him," Avery told Lynn and Bishop Joseph Cistone in a 1992 interview, according to an archdiocesan memo read in court.

Avery was sent for inpatient therapy for eight months before returning to ministry. He sexually assaulted the altar boy seven years later, he admitted Thursday.

Lynn faces up to 28 years in prison if convicted of two counts each of conspiracy and child endangerment.