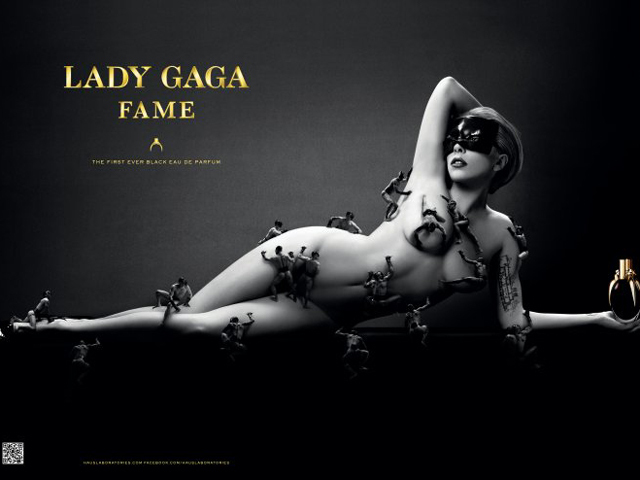 (CBS News) Lady Gaga's latest ensemble - or lack thereof - is front and center in an ad for her new fragrance.

The pop star is seen in the image holding the perfume bottle and wearing a black mask, as tiny men climb (and strategically cover) her nude body.

The campaign, shot by photographer Steven Klein, is accompanied by the name of the fragrance, Lady Gaga Fame, and the tagline, "The First Ever Black Eau de Parfum."

Lady Gaga, 26, shared the photo with fans Monday via Twitter.

"I won't lie I'm a bit nervous. It's been a while since I shared some work with you," she wrote. "But I'm so proud of Steven+I, we really did not sleep!"

Last year, she told an Australian radio show that her debut fragrance would smell "like an expensive hooker."

"[Blood and semen] is in the perfume but it doesn't smell like it," she said at the time. "You just get sort of the after feeling of sex from the semen and the blood is sort of primal. And the blood was taken from my own blood sample so it's like a sense of having me on your skin."

According to Women's Wear Daily, the fragrance features notes of belladonna, honey, saffron and apricot nectar - not bodily fluids. The perfume appears black in the bottle, but sprays on clear and is invisible once airborne.

Tell us: What do you think of the singer's fragrance ad?