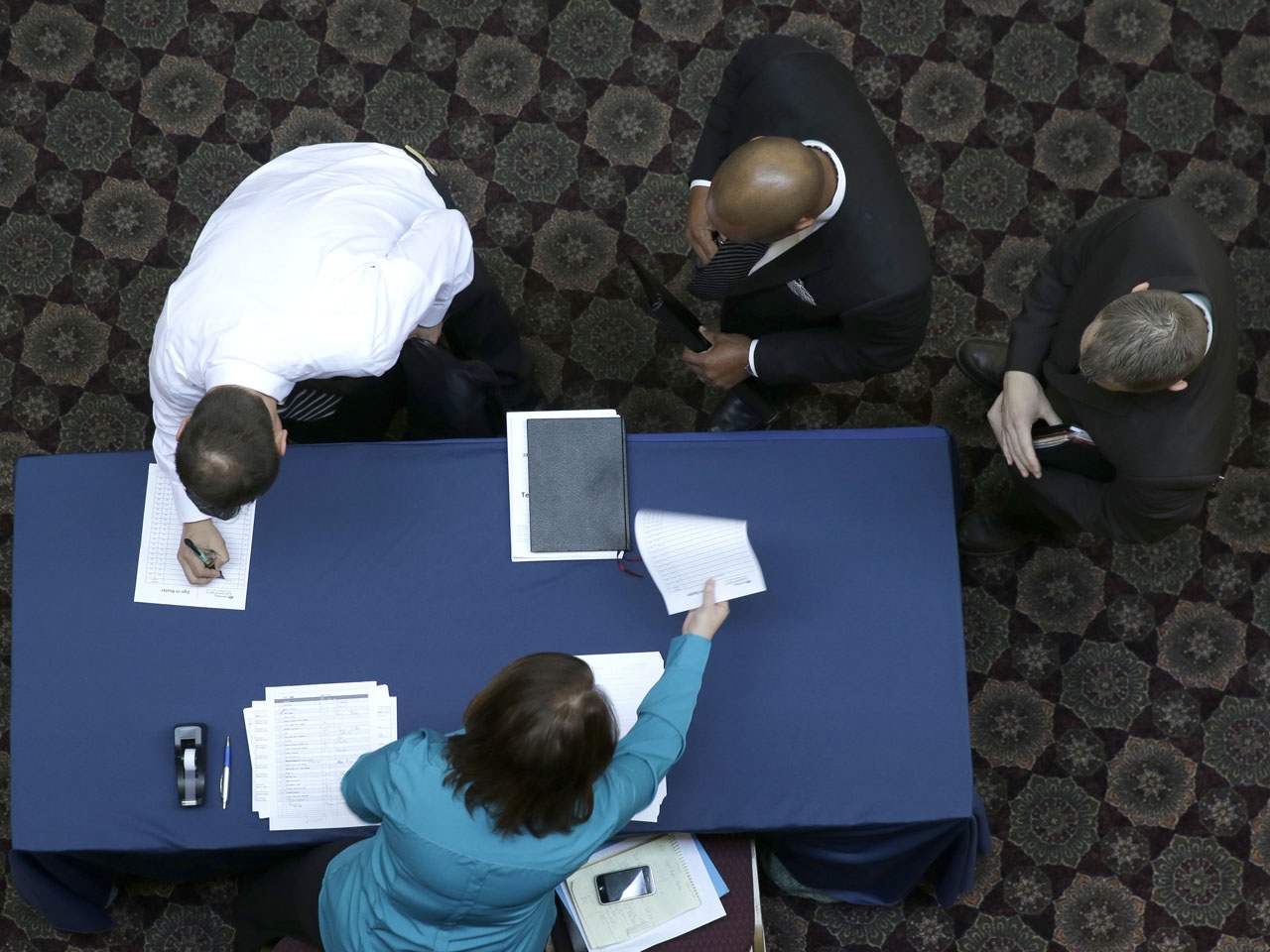 The labor market thawed last month, easing concerns that the economy is headed for another slump.

Employers around the U.S. added 175,000 jobs last month, the Labor Department said Friday, exceeding forecasts and shrugging of the effects of the wintry weather that continued to grip much of the country. The unemployment rate inched up to 6.7 percent, from 6.6 percent in January, as more people searched for work in February.

The government also said that that nonfarm payrolls grew by a total of 25,000 more jobs in December and January than initially estimated. Private companies led the way, adding 140,000 jobs.

"These new employment data confirm the economy's moderate rate of underlying economic growth and dispel the notion that any significant long-term downshift in growth occurred in December and January," said Doug Handler, chief U.S. economist with IHS Global Insight, in a research note.

With the unusually bitter winter keeping job-hunters at home, halting construction and otherwise chilling economic activity, getting a read on the economy has turned into a guessing game.

The central question: To what extent is the bad weather responsible for the recent downturn in job growth, or are other factors putting the brakes on an economy still struggling to leave the 2008 financial crisis behind?

What's not in doubt is that the labor market had hit the skids of late. After gaining speed last fall, job-creation plunged in December, when employers added a paltry 84,000 jobs, and again undershot forecasts in January. Concerns that the economy was cooling grew last month after the U.S. Commerce Department revised down its estimate for fourth-quarter growth to 2.4 percent, from 3.2 percent.

Meanwhile, while the jobless rate has fallen significantly over the last 12 months, that decline likely overstates the degree of improvement in the labor market. Factoring in individuals who say they want work, but who haven't actively searched for a job in recent months, the unemployment rate is more than 10 percent, according to research firm Wrightson ICAP.

Other signals, such as measures of manufacturing activity, also highlight the reluctance by employers to expand their payrolls, while tepid growth in earnings continues to inhibit spending.

Despite this loss of momentum, most economists attribute the slump chiefly to the snowstorms and frigid temperatures that have affected much of the country in recent months, rather than fundamental weakness in the economy. And to be sure, the weather has retarded the recovery. Bank of America Merrill Lynch analysts estimate that this winter has been the third-harshest since 1960 in terms of its impact on growth and hiring.

Recent economic data seem to affirm that view. Bad weather hurt retail sales in most areas of the country, the Federal Reserve said this week in its regional outlook report. Housing and auto sales, both major drivers of consumer spending, have also taken a hit as the mercury dropped. Fed Chair Janet Yellen highlighted these weather effects late last month in her semi-annual report to Congress.

Companies, too, attest to the toll the weather is having. Some 45 percent of workers say their company has been affected by the harsh winter, while 39 percent say they have lost business, according to a new poll by commercial property insurer FM Global.

If weather is behind the slump, it could take another month or two to get a clearer picture of the labor market, said Gus Faucher, senior economist with PNC Financial Services Group. When the cold and snow finally do recede, he expects the economy to find its footing.

"There's nothing that indicates to me that the pace of hiring has slowed outside of temporary factors, so over the next couple of months we should get some bounce-back," he said ahead of the government's latest labor report.

Indeed, many experts think the labor market will regain much, if not all, of its strength as business activity delayed by the frosty temperatures picks up with the arrival of spring. Most economists expect GDP to expand by roughly 3 percent this year. That would be a sizable gain over the 1.9 percent pace of growth in 2013, although still well short of the rate of expansion that has followed previous recessions.

Ian Shepherdson, chief economist with Pantheon Macroeconomics, expects that job-creation will return to around 200,000 per month over the next two months.

The improvement in hiring keeps the Fed on track to continue unwinding its bond purchase program, a policy implemented in 2009 to boost the economy by lowering interest rates and encouraging borrowing and investment.

"The rebound in U.S. payroll employment in February, to 175,000 from 129,000 in January, pretty much guarantees that the Fed will taper its asset purchases further at the mid-March meeting, especially as payrolls would have been stronger if it wasn't for the unusually severe weather," said Paul Dales, senior U.S. economist with Capital Economics, in a client note.

A home made from shipping containers
Alain Sherter