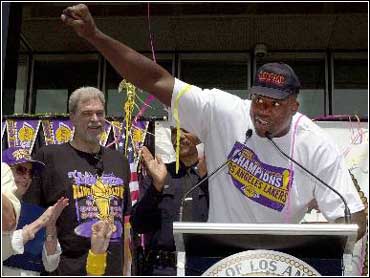 Where stores were looted and police cars burned two days before, almost a quarter-million Los Angeles Lakers fans hailed the new NBA champions Wednesday in an adoring sea of purple and gold.

They heard speeches from the mayor, promises of more titles and a pledge from their biggest star to try to undo some of the damage from Monday night's violence.

"The other night after the game, a couple of bad things happened, a couple of people trashed two police cars," Shaquille O'Neal said. "So on behalf of the Lakers and (coach) Phil Jackson, we're going to get them two new police cars."

"We want to say that when we get one (championship) next year, we just want to be safe, we want everybody to be safe and do the right thing because we're going to get one next year, too."

The fans roared, and said the outbreaks of crime after the title clincher seemed far away.

"I had no reservations at all about coming out today," said Dorothy Rhan, a member of the enthusiastic crowd stretching nine blocks to the Lakers' home at the Staples Center.

A mob looted stores, smashed windows and torched police cars and news vans outside the arena after the Lakers defeated the Indiana Pacers 116-111 for the NBA crown. Eleven people were arrested and four police officers were hurt.

Police vowed zero tolerance for parade violence and a highly visible force of more than 300 officers was stationed along Figueroa Street to keep the peace. Reinforcements were on hand nearby as a precaution.

There were no arrests and no trouble reported.

"This is a festive event. If there was some type of problem, we'd be ready," police Lt. Horace Frank said. He estimated the crowd at about 200,000.

Jackson got a huge ovation when he joined the Lakers on stage outside the Department of Water and Power building prior to the parade kickoff. At least seven helicopters buzzed overhead.

"We appreciate this a lot. This is for the city of L.A. We are starting a new millennium right now," Jackson said. Signs in the crowd called it a "new Phillennium."

Mayor Richard Riordan declared it Laker Day in the city celebrating its first NBA championship in 12 years and a skywriting plane spelled out "LA Lakers" overhead.

"What a great day," Riordan said to the wildly cheering throng. "You are the first champions of the 21st century, the start of a great dynasty. But most of all, you are No. 1 in the hearts of all Angelenos."

Then, it was time for O'Neal, te 7-foot-1 center who swept Most Valuable Player honors in the regular season, the All-Star Game and the playoffs.

"I cannot hear you all," the gum-chomping O'Neal said, egging on the crowd as it chanted "MVP! MVP! MVP!"

O'Neal also declared that his era as "The Big Aristotle," spouting philosophy in lockerroom interviews, was over.

"I want to be known as 'The Big Shakespeare,"' he said. "Because it was Shakespeare that said, 'Some men are born great, some achieve greatness, some have greatness thrust upon them,' and it was great doing it this year for the city and for everybody else. And we're going to try to get one next year. I love you."

Fans had staked out prime spots along the parade route during the night and several thousand were on hand by dawn. By the 11:15 a.m. start of the parade, people squeezed 20 and 30 deep on Figueroa.

Sunshine bathed the jubilant crowd on the first full day of summer. Many wore purple-and-gold Lakers colors and hoisted signs reading "Honk for Kobe Bryant," "Lakers rule 2000," "AC Green, Will you marry me?" and "Bling Bling."

"Bling Bling" was O'Neal's explanation for the sound made when light bounces off a diamond NBA championship ring.

One sign spanning a bridge read, "It's only the beginning!"

The largest crowd assembled outside the Staples Center for a post-parade ceremony. Spectators jammed parking lots for a glimpse of their NBA heroes.