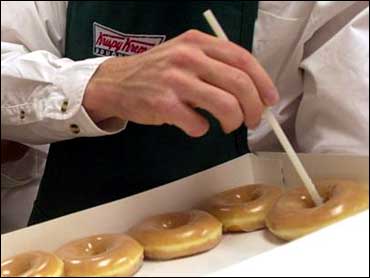 Chief executive officer Scott Livengood was ousted Tuesday as head of troubled Krispy Kreme Doughnuts Inc., which has been under regulators' scrutiny for its franchise buybacks and earnings outlooks and is facing shareholder lawsuits.

The Winston-Salem company's board of directors said Livengood, a 28-year veteran of the doughnut maker who has been criticized for his handling of the company's recent financial problems, would retire as part of a series of "important actions to address the company's current situation." Livengood, who had been CEO for since 1998, was replaced as CEO by Stephen Cooper, who most recently shepherded the Enron Corp. bankruptcy reorganization.

The company said Livengood also retired from his positions as president, chairman of the board and as a director of the company and will become a consultant on an interim basis.

Steven Panagos was named president and chief operating officer and James Morgan, who has served as a director of the Company since July 2000 and vice chairman since March 2004, has been elected chairman.

Earlier this month, the company said it was restating earnings for the last three quarters of fiscal 2004. That came after allegations in a shareholder lawsuit that the company padded shipments to hide declining sales over the last two years

In its latest SEC filing, the company said it continues reviewing other errors and proposed adjustments that could result in the company's net income for the year being trimmed by as much as 7.6 percent.

Krispy Kreme is under a formal SEC investigation of its franchise buybacks and earnings outlooks and is facing shareholder lawsuits. The once-high flying company in November posted a $3 million third-quarter loss, its second losing quarter of 2004 and its stock has dropped sharply to about a quarter of its 2003 value.

Krispy Kreme has closed a number of stores since May and taken other steps to address its problems.