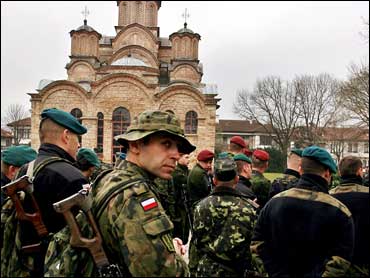 Kosovo will gain independence from Serbia well before May, a government spokesman said Monday as the breakaway Serbian province pressed the European Union to swiftly sign off on statehood.

"It's not an issue of if, but when," spokesman Skender Hyseni told The Associated Press after a meeting of Kosovo's ethnic Albanian leadership. "Kosovo will look at its own agenda, but it will certainly be much earlier than May."

Kosovo is widely expected to announce early in 2008 that it will formally break away from Serbia, but has vowed not to do so without European Union and U.S. approval.

On Friday, a "troika" of envoys from the EU, U.S. and Russia reported back to U.N. Secretary-General Ban Ki-moon that four months of internationally mediated talks had ended in a stalemate.

The U.N. chief had given the troika until Monday to agree on a follow-up administration for Kosovo, but the key issue of independece from Serbia proved too great an obstacle for negotiators.

EU foreign ministers were meeting Monday on the Kosovo crisis, and the U.N. Security Council is set to take up the issue on Dec. 19.

Although the province formally remains part of Serbia, it has been run by the U.N. and NATO since 1999, when NATO air strikes ended a Serbian crackdown on ethnic Albanian separatists.

Serbia has offered Kosovo broad autonomy but insists it remain part of Serbian territory, and Russia has threatened to block its independence drive at the U.N. Security Council.

Earlier Monday, Kosovo's outgoing prime minister urged the EU to swiftly sign off on the breakaway province's quest for independence, and a senior Serbian official prepared to open a government office in Kosovo's tense north in a gesture of defiance.

The EU must "recognize the need for immediate and permanent conclusion of this process," Agim Ceku told The Associated Press in an interview.

"I think that Serbia has a choice: Going into the future together with us, or going back to the past alone. We hope that they will make the right choice," said Ceku, who is preparing to hand over power to former rebel leader Hashim Thaci, whose party won elections last month.

Later Monday, Serbia's minister for Kosovo, Slobodan Samardzic, planned to open a branch office on the Serb side of the ethnically divided northern city of Kosovska Mitrovica - long a flashpoint for violence between the province's ethnic Albanian majority and its minority Serbs.

Samardzic also was to tour Serb villages and meet with U.N. officials. But the opening of a Serbian government office inside Kosovo was seen as a clear territorial claim by Belgrade, which sees Kosovo as the heart of its ancient homeland and refuses to let it go.

"We are not afraid of a primitive Albanian tribe," the leaflets reportedly read.

The U.S. and most EU countries have signaled they will recognize an independent Kosovo, but five European countries - Cyprus, Greece, Slovakia, Spain and Romania - have expressed misgivings, fearing it would set a bad precedent by encouraging separatist movements elsewhere in Europe and worldwide.

On Sunday, Kosovo's leadership issued a statement pledging to refrain from violence and "do the utmost to ensure Kosovo remains calm" as NATO beefs up its presence in the volatile province, fearing revived hostility between the rival sides.