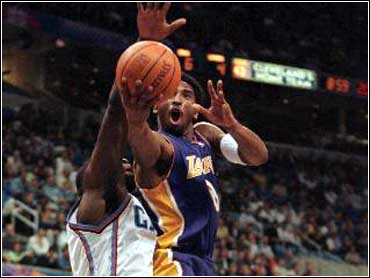 Kobe Bryant scored 21 points and Robert Horry added 20 as the Lakers pulled away from Cleveland in a 116-98 win Wednesday night. The victory gave the Lakers a sweep of their road trip and their ninth straight win overall.

This marked the first time the Lakers have swept a six-game road trip. Los Angeles is now tied for the best record in the NBA with Portland at 43-11.

After the game, Lakers coach Phil Jackson squelched a flurry of rumors that the Cavs would deal Kemp to the Lakers before Thursday's NBA trading deadline.

"It was all hearsay," Jackson said. "It was not factual."

Instead of donning purple and gold, Kemp finished the night Wednesday tearing off his jersey and tossing it into the stands. He had just been ejected late in the fourth quarter for throwing a couple of towels on the court after he fouled out.

"That was kind of out of character for Shawn Kemp," said Wesley Person, who finished with 16 points for Cleveland. "I think it just boiled over. He's been getting beat up all season."

Cavs center Mark Bryant got thrown out a couple of minutes later after exchanging words with Shaquille O'Neal.

The Cavaliers came back from a 13-point first-half deficit to take a couple of brief leads in the third qurter.

But Kobe Bryant's 3-pointer with 1:30 left in the quarter put Los Angeles up for good at 79-76, and the Lakers pulled away as O'Neal scored 11 of his 19 points in the fourth quarter.

"This game was one of those little checkpoints you reach in a season," Jackson said. "I was proud that we came back and played with purpose. That was very important."

Still, none of the Lakers seemed overly excited about winning all of their six games on this East Coast trip.

Andre Miller, a rookie getting lots of playing time because of injuries, also scored 23 points for Cleveland. He got swatted in the eye by O'Neal in the first quarter and had to leave the game, but he returned after a few minutes and recharged Cleveland's offense.