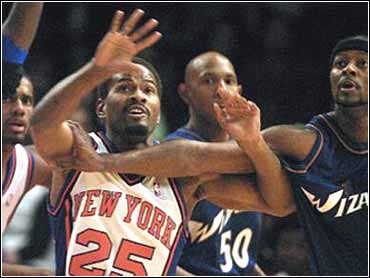 Their coach said the Knicks were "awful" on defense, which proves one of two things: Jeff Van Gundy is awfully picky, or else has awfully high standards.

Matching an NBA record that had stood for more than 46 years, the New York Knicks held their opponent under 100 points for the 28th straight time Sunday night as they routed the Washington Wizards 103-87.

Playing with their regular starting lineup for the first time since Nov. 17, the Knicks tied the sub-100 record set by the Fort Wayne Pistons at the start of the 1954-55 season when the NBA had just introduced the 24-second shot clock.

"It was awful. I'm being serious, the defense was awful," Van Gundy said. "It's a nice achievement, but one thing you can't do when you win is overlook your slippage, and there has been huge slippage with us defensively."

The victory extended New York's winning streak to seven games, the franchise's longest since late in the 1996-97 season. The Knicks will try for their first eight-game winning streak since 1994-95 Pat Riley's final season as their coach when they play the Houston Rockets on Thursday night.

After that, the Knicks finish a five-game homestead against Portland and San Antonio.

"We can be a dominant defensive team at times, we just haven't done it the last three games," Van Gundy said. "Now we're coming up on the heavyweights, and our defense is going to have to get back on track to beat the teams we have coming up."

Marcus Camby scored 21 points, Allan Houston had 19 and Larry Johnson 15 for the Knicks, who took control early in the second quarter and opened a 23-poinlead by the end of the third.

The only question in the fourth quarter was whether the Wizards could score 35 points to reach 100, and they didn't even come close.

No opponent has reached 100 against the Knicks since Boston scored 101 in an overtime loss Nov. 10. Over the entire season, the Knicks have held their opponent under 100 in 32 of 34 games.

"Awful?" Latrell Sprewell asked upon hearing Van Gundy's postgame comments. "Well, they didn't get 100 so we've still got that streak going. If he felt it was awful it probably was, but the bottom line is we won."

Juwan Howard had 27 points to lead Washington, which has lost nine of its last 11 games and 18 of 21 since late November.

Charlie Ward, who underwent arthroscopic knee surgery Nov. 26, returned to New York's starting lineup after missing 21 games. He had seven points and four assists in 23 minutes, including five straight points on a 3-pointer and a short pull-up jumper midway through the third quarter that gave the Knicks a 72-55 lead.

Wizards coach Leonard Hamilton was ejected moments later, and Washington did not threaten the rest of the way.

"Their team is really organized. I like their team," Washington forward Tyrone Nesby said. "Their guys talk to each other, telling each other to do this and that. I don't see many teams doing that."

Houston had nine points and Camby eight in a first quarter that ended with New York leading 27-22, and Erick Strickland contributed nine points and a flashy behind-the-back pass to Johnson on a fast break with 5:20 left in the second quarter to complete a 20-7 run that gave the Knicks a 47-33 lead.

The Wizards trailed by double digits the rest of the way.

"Definitely a team like Washington shouldn't score 100 points on us. A couple teams out West really put up some numbers, teams like Sacramento, but I don't think any team should get 100 points on our defense," Camby said.