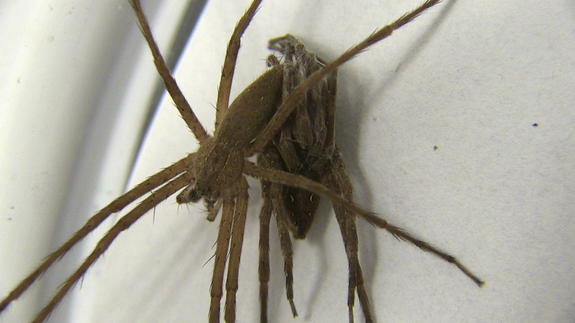 Tying up your lover is one way to introduce a little excitement to the bedroom. But for male nursery-web spiders, bondage during mating can be a matter of life and death. By restraining their partners, male spiders reduce their chances of falling victim to sexual cannibalism, a new study finds.

Nursery-web spiders (Pisaurina mira) are long-limbed hunters that catch and overpower their prey. Though the females' bodies can be a bit larger than males', measuring about 0.5 to 0.7 inches (12 to 17 millimeters) in length, researchers noted that males' legs were longer than females', relative to their body size.

Prior studies described the male spider's unusual mating behavior -- wrapping silk around the female's legs before and during copulation -- and the scientists wondered if longer legs would help males restrain their hungry mates, leaving the guys more likely to survive cannibalism sparked during the throes of passion. [Animal Sex: 7 Tales of Naughty Acts in the Wild]

In some insect and spider species, sex can be a deadly roll of the dice for males, carrying the possibility that their female partners may suddenly identify them as a convenient postcoital snack. While this is understandably not an ideal outcome for males, cannibalizing is "quite beneficial for the female," said Alissa Anderson, who co-authored the study.

Anderson, a behavioral ecologist at the University of Nebraska-Lincoln, told Live Science in an email that to a just-fertilized female with eggs to nourish, her mate's immediate value transforms from sex partner into "resources for her developing offspring" -- like a Happy Meal with legs. In another spider species, Anderson and her colleagues explained in the study, when a female consumes the male after mating, it leads to more offspring and increases the little spiders' weight and chances for survival.

And it's the conflict between these two competing desires -- the female's urgent need for sustenance and the male's need to not die -- that can lead to unusual sexual-survival strategies, Anderson said.

According to the researchers, in one spider species that practices sexual cannibalism, the males will play dead to keep from being eaten. In other species, males sedate the females into unconsciousness, while the males of still other species seek out and mate with females that are busy cannibalizing their earlier sex partners.

Or, like the nursery-web spider, males will bind the females' legs securely in the pursuit of safer sex.

Silk serves several purposes for nursery-web spiders, though the arachnids don't spin webs to catch prey. Females build "nursery webs" that hold newly hatched and developing spiderlings, while both males and females produce strands of silk that may be used like lifelines to help the critters swing to safety if they fall or are threatened.

And during mating, the males loop silk strands around the females' legs. Other spiders may drape their mates with silk, but these nursery-web spiders are the only male spiders that use their silk to physically restrain females, Anderson told Live Science.

Longer-legged male spiders that had larger bodies were the most successful at wrapping up their partners, and the most likely to walk away after mating, the researchers found. Restraining the females also allowed males to achieve "more insertions," the scientists noted, which is known in other spider species to increase the chances of successful fertilization.

Because longer legs could help the males manipulate their silk to more effectively bind the females, this would likely be a sexually selected trait, the study concluded.

The findings were published online Feb. 23 in the journal Biology Letters.