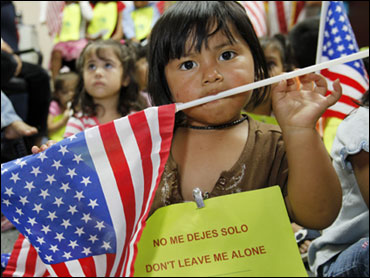 Ronald Soza celebrated his 10th birthday Wednesday with cake and a serenade by more than 100 other children and their parents.

His own family: absent. His mother was recently deported back to Nicaragua. His father rarely ventures out in public in fear of a similar fate. Now Soza and the other children — all U.S. citizens whose parents face deportation — are demanding a say in the immigration debate.

They are suing President Barack Obama, asking a court to halt the deportations of their parents until Congress overhauls U.S. immigration laws.

The children, who gathered Wednesday at the Miami nonprofit American Fraternity to draw attention to their cause, say their constitutional rights are being violated because they will likely have to leave the country if their parents are forced to go.

Some children said their families didn't have enough money to pay for school supplies because the breadwinning parent had been deported, and some are at risk of losing their homes. They also say they are suffering psychological and physical hardship.

"My grades went from A's to C's when my mom had to leave," said Ronald.

Nearby, 5-year-old Sara Bedoya Sanchez comforted her sister Salome, 3, who played with a paper sign pinned to her chest reading "Don't Leave me alone."

"I came today because I want to stay with my mommy here," said Sara, who was born in South Florida, but whose mother came from Medellin, Colombia, through Mexico, crossing the Rio Grande on foot nearly a decade ago.

Nora Sandigo, the head of the Fraternity, originally brought the case on behalf of the children against the Bush administration. She refiled it in January in Miami and a hearing is scheduled for August.

Sandigo said she is frustrated that the Obama administration hasn't done more to address immigration reform.

"Today these children's voices are not heard," Sandigo said as dozens of youngsters squirmed and twirled their flags on a rug before her, "but tomorrow these U.S. citizens will be voting."

Perhaps not literally, but many of the more than 100 children who gathered Wednesday are already in their teens and will be voting age by the next presidential election.

Also on Wednesday, religious leaders and supporters gathered in Washington for a prayer vigil in advance of Obama's proposed meeting on immigration next week with congressional leaders.

Sandigo says many of the children's parents came to the U.S. before 1996 immigration changes made it more difficult for them to become legal residents. When they came, they had a valid expectation that if they stayed out of trouble for seven years, they could eventually become legal residents, she has argued.

Immigration experts say the case has a tough road in the courts because Congress explicitly made the law retroactive.

And the plight of the children is not grounds for their parents to remain in the U.S., said Mark Krikorian, executive director of the Center for Immigration Studies, which seeks to limit immigration.

"These are deportable aliens, and they get whatever due process Congress grants them and nothing more," Krikorian said.

"There are going to be times when you're going to want to make exceptions in certain cases, but today the law is so riddled with exceptions that now is not the time."

Sandigo has championed seemingly hopeless causes before. She brought a lawsuit in the early 1990s to help fellow Nicaraguans avoid being deported back to their war-ravaged country. The case prompted Congress to pass an amnesty law for many Central Americans.

The current lawsuit could also advance the cause of immigrants in the political arena, said immigration Scholar Louis DeSipio of the University of California, Irvine.

"It's a very conscious decision of the immigrant advocates to focus on this issue," he added, "to disabuse Americans of the images we have of men in their twenties and thirties running across the border, showing instead that it's a family affair."