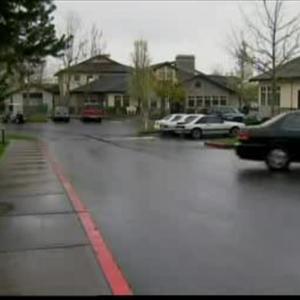 John Eckhart, 30, and his 26-year-old partner, Alayna Higdon, appeared in Clark County Court Wednesday on second-degree criminal mistreatment charges for allegedly boarding up two children in a bedroom in a Vancouver, Wash. apartment complex, according to CBS affiliate KOIN.

The couple was arrested Tuesday after police went to the Springfield Meadows complex . Police were dispatched after Child Protective Services became concerned when they couldn't gain access to the unit, KOIN reported.

Police said two boys - ages 5 and 7 - were forced to live in dingy conditions with little nutritious food. According to police spokeswoman Kim Kapp, Eckhart is the father of the two boys, who were wearing just diapers when police arrived and were in a bedroom that had the door replaced with a cage-like door, according to KOIN.

Two other boys - 11 months and 9-years-old -were also living in the apartment, but weren't locked up. Eckhart and Higdon are the parents of the 11-month-old; Higdon is the mother of the 9-year-old.

All four children are in Child Protective Services custody. Eckhart and Higdon are due back in court on April 27.