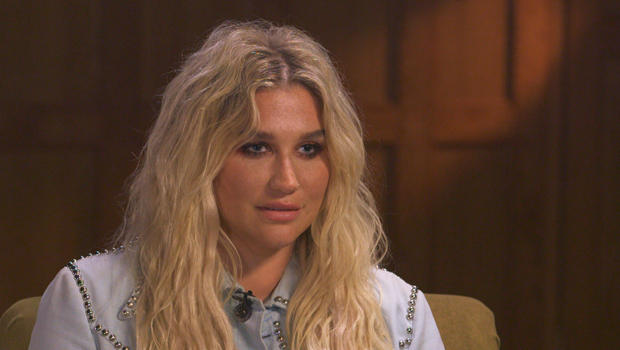 Songs like "Tik Tok"  have put the pop artist Kesha on the map. And so have her statements – musical and otherwise – on behalf of women's rights. She speaks with Anthony Mason For The Record:

Kesha had long dreamed of having a Grammy moment. This year she got her chance.

It was, she told, Mason, "the scariest day of my life."

She sang "Praying," an anthem she dedicated to survivors of sexual assault:

Mason asked, "When you started to sing, was it okay?"

"Did you have to prove something to yourself in some way?"

"Yeah, that I deserved to be there," she said. "And I'm going to sing a song that I wrote about something that's really important."

Kesha, who's been fighting a bitter legal battle with a producer she's accused of sexual assault, was supported on stage by a chorus of women, led by Cyndi Lauper. It ended, Mason noted, "with one of the longest group hugs I've ever seen!"

After that #MeToo moment, in April, the 31-year-old singer was named to Time Magazine's list of 100 Most Influential People.

Mason asked her, "Do you feel influential?"

"So, what do you think when they put that label on you?"

"It just feels really strange. 'Cause I've been labeled a lot of un-extraordinary things, and that was so hurtful. I'm so happy now it's really nice things!"

But Kesha Rose Sebert says she has always felt like an outcast. "I don't feel like I fit in anywhere, really. Still," she said.

Mason said, "But you have millions of fans who suggest you fit in with them."

Growing up in Nashville, Kesha says music consoled her: "I don't know how I would have gotten through life without writing songs," she said. Her mother, Pebe, a songwriter, taught her to use it as therapy.

"It's one of our favorite things to do together," Kesha said. "Like, we could be in a total fight, and she'll be like, 'I have a song idea.' And I'm like (sighs) 'What is it?' And we'll sit down at a piano and write like a really beautiful song together."

Kesha chased her dream to L.A., where her irreverence attracted Lukasz Gottwald, the producer known as Dr. Luke, who signed her to a six-record deal.

Her first album, "Animal," would produce four top ten singles, including "Take It Off":

But the pressure to look like a pop star took a toll. In January of 2014, she admitted herself to Timberline Knolls, a clinic outside Chicago, for an eating disorder.

She told Mason, "I just, like, hated myself so much. I had so much sadness. I was projecting [a] person that promotes self-love. And I was doing none of that for myself."

"Did you have to be persuaded or did you know it?"

She spent two months in treatment, fighting to restore her spirit. "I was in such a dark hole of a place," Kesha said. "And the song, 'Rainbow, ' I kind of wrote as, like, a letter to myself, to like, 'You can get it back.'"

I know that I'm still f----d up
But aren't we all, my love?
Darling, our scars make us who we are
So when the winds are howling strong
And you think you can't go on,
hold tight, sweetheart
You'll find a rainbow

Then, in a declaration of independence, she dropped a bombshell lawsuit on Dr. Luke, accusing her producer of sexual assault and battery, sexual harassment, gender violence, civil harassment, unfair business and emotional distress, along with drugging and raping her in 2005.  Court papers describe "years of unrelenting abuse" that left her "broken, damaged and traumatized." She's also alleged Dr. Luke exerted "suffocating control" over her career.

Dr. Luke denies it all.  In a lengthy statement to "Sunday Morning," his attorney told us, "Dr. Luke never raped, drugged or abused Kesha," and "Even though Kesha Sebert testified in 2011 in a videotaped deposition that Dr. Luke had never drugged her, or made any sexual advances towards her, in 2014 she filed a baseless lawsuit against Dr. Luke.  She falsely accused him of raping and drugging her in 2005."

The statement continues, "This is a situation where he and his family have been greatly harmed…"

Dr. Luke has countersued for defamation and breach of contract.  Kesha has not recanted her accusations and is still litigating her contract in a New York court.

Kesha's lawyers (one of whom sat in on our interview) have counseled her not to comment on the litigation.

"I can't really talk about that part," she told Mason.

"I guess what I'm asking is, what are you telling yourself when you're going through this?"

After a pause, she replied, "There's only so much somebody can take."

In 2016, when a judge denied an injunction to release her from her contract, she wept in court. The hashtag #freekesha swept social media. Taylor Swift kicked in a quarter of a million dollars to help with her legal fees, and Adele spoke out in her support.

Mason asked, "Did you realize that you had people behind you like that?"

"No. No. Not at all. Like Adele, I never knew in a million years she knew who I was. It just felt like that at least people understood that I was, like, stuck."

"In a way, you've been made a symbol of something."

"I appreciate it. I do," said Kesha. "But I'd prefer people use my art than myself, because I'm so imperfect and flawed. So, that just makes me nervous."

Last August, with new producers, she released her first new album in five years. "Rainbow" debuted at #1. She said, "I feel like I took my life back."

And next month, Kesha will launch a new tour.

Her legal battles continue, but she's had the words "Live Free" tattooed across her fingers:

"Well, the litigation is ongoing. But …"

"How much does that still hang over you, and in your head?"

"You let them worry about it?"

"They deal with it. In my mind, my focus is my music and, like, my happiness. 'Cause who knows when the sun's gonna burn out?"

"What do you want next?"

"I just wanna be happy," Kesha said, "'cause I feel like that's winning. That's winning everything."