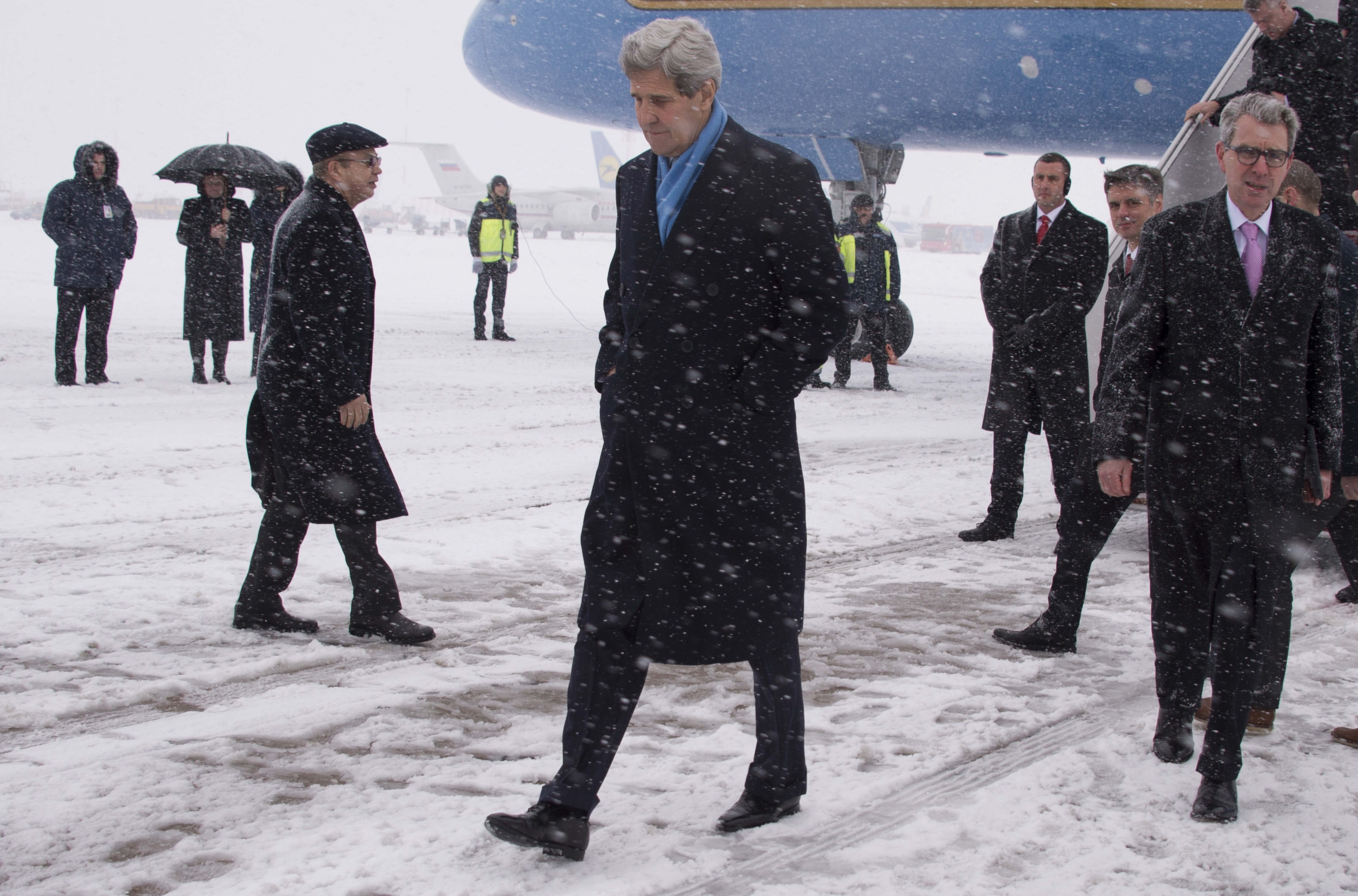 KIEV, Ukraine -- The leaders of France and Germany proposed a new peace plan Thursday to end the fighting in eastern Ukraine, flying to Kiev to present it in person before heading to Moscow. The surprise move appeared aimed at heading off any U.S. decision to give Ukraine lethal weapons, something Europeans fear could spark even wider hostilities.

In Moscow, President Vladimir Putin's aide welcomed the new European initiative and said the Kremlin was ready for a constructive discussion. NATO defense ministers in Brussels, however, boosted the alliance's rapid response forces due to the fighting in Ukraine and Russia's increased military muscle-flexing.

CBS News correspondent Elizabeth Palmer reported Wednesday from eastern Ukraine, where poorly trained and equipped government forces are coming under heavy pressure as the rebels advance, and they're still relying on donations for many of their vital supplies.

Russia has vehemently denied backing the rebels with troops and weapons, while still acknowledging that some Russians are fighting with the separatists. Western military experts scoff at the Russian denial. The top NATO commander, U.S. Air Force Gen. Philip Breedlove, said Thursday that Russia continues to supply the separatists with heavy, state-of-the-art weapons, air defenses and fighters.

In comments to reporters after their talks Thursday, Kerry urged Russia to show its commitment to a peaceful, diplomatic solution to the conflict in eastern Ukraine by ceasing its military support for the separatists and bringing them to the negotiation table.

"Our choice is diplomacy," Kerry said, making no mention of providing Ukraine with lethal military aid.

At a later news conference with Ukrainian Prime Minister Arseniy Yatsenyuk, Kerry said President Obama "is reviewing all his options; among those options obviously is the possibility of providing defensive systems to Ukraine."

"We are not interested in a proxy war. Our objective is to change Russia's behavior," he said.

Fighting between Russia-backed separatists and Ukrainian forces in eastern Ukraine surged in January, sending the death toll to over 5,300 people killed since the conflict began in April. At least three people were killed in overnight shelling in the rebel stronghold of Donetsk, local officials said, and Ukraine said five servicemen were killed and 29 others wounded in the last 24 hours.

France and Germany were hoping this time they can come up with a peace deal that both Ukraine and Russia can agree upon. In a sign of the importance of the initiative, this will be German Chancellor Angela Merkel's first trip to Moscow since Ukraine's conflict broke out a year ago.

French President Francois Hollande and Merkel traveled to Kiev and met with Poroshenko on Thursday evening. They plan to visit Moscow on Friday with a peace proposal "based on the territorial integrity of Ukraine."

"It will not be said that France and Germany together have not tried everything, undertaken everything, to preserve the peace," Hollande said earlier.

The French leader did not mention the U.S., saying the two European nations and Russia have special historic, cultural and economic ties. A senior French government official told The Associated Press the two leaders decided Wednesday night on the trip and did not consult American officials about it. The official was not authorized to be named, according to French policy.

Kerry, however, sought to cast the new European initiative as part of unified Western efforts to support Ukraine.

He said the visit to Kiev by Merkel and Hollande "underscores that, together, the United States, France, Germany and the rest of our international partners stand united with Ukraine in calling on Russia to take the steps that I just outlined."

In Moscow, Putin adviser Yuri Ushakov said Russia was "ready for a constructive conversation" aimed at stabilizing the situation, establishing a dialogue between the Ukrainian government and the rebels and rebuilding economic ties between eastern Ukraine and Kiev. He said the Kremlin expects that Merkel and Hollande had taken Putin's own peace proposals into account.

Western diplomats said Putin gave the French and Germans a nine-page peace plan, and that Hollande and Merkel were taking a repackaged version of that with them. The diplomats said the European version drops the most objectionable elements of the Russian plan to fit what Ukraine and the Europeans want, such as some autonomy for eastern Ukraine with special protections for language, culture and local taxes.

Kerry said the French and German foreign ministers had informed Washington about the Russian proposal but he did not have all the details.

Kerry brought $16.4 million in new humanitarian aid to Ukraine as the Obama administration weighed sending arms to help the beleaguered Kiev government fight the heavily armed separatists. Mr. Obama has opposed sending weapons but sources in his administration say that position could change.

Germany and other European nations remain fiercely opposed to sending arms to Ukraine. Federica Mogherini, the EU's foreign policy chief, backed the French-German peace effort, saying "there is no military solution to the crisis in Ukraine."

"By throwing more weapons on the bonfire, I don't believe, unfortunately, that we will solve the problems in Ukraine," Danish Foreign Minister Martin Lidegaard said in Copenhagen, urging more sanctions against Russia to force the rebels back into peace talks.

European Union foreign ministers will be talking Monday about increasing EU sanctions against Russia for its actions in Ukraine.

In Brussels, NATO Secretary-General Jens Stoltenberg said the group's defense ministers boosted the size of the alliance's Response Force from 13,000 to 30,000 in reaction to Russian actions in Ukraine and to Islamic extremism. The alliance also moved to form a quick-reaction force of 5,000 ground troops.

The decisions will "ensure that we have the right forces in the right place at the right time," Stoltenberg said.

Breedlove, the top NATO commander, warned Thursday that any move to give Ukraine lethal defensive weapons "could trigger a more strident reaction from Russia."

Breedlove also emphasized it was important to make sure that Moscow and the separatists don't once again use a cease-fire to build up their forces and prepare for a new offensive to gain more territory.

Hollande appeared to offer an olive branch Thursday to Putin on the Russian leader's key demand: that Ukraine stay out of NATO.

"France is not favorable to Ukraine's entry into NATO, let us be clear," Hollande said.

Ukraine's economy, meanwhile, has been devastated by the crisis in the east. Its currency, the hryvnia, slid 46 percent Thursday against the U.S. dollar, prompting the government to raise a key interest rate by a whopping 5.5 percentage points to 19.5 percent. The move eased some pressure on the currency.

According to Poroshenko, Ukraine is spending up to $8 million a day fighting the rebels.