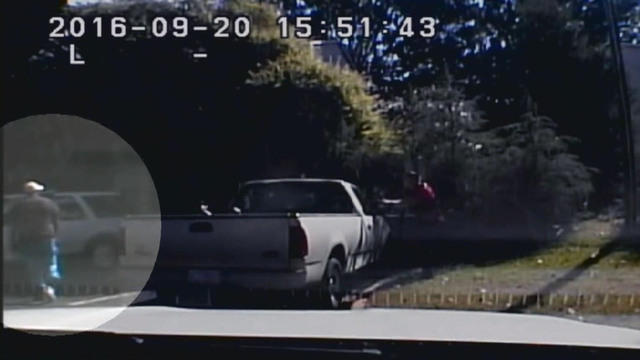 There are still questions surrounding the deadly police shooting of Keith Lamont Scott by police in Charlotte, North Carolina. At the demands of protesters, police have released dashcam and body cam videos, but they fail to show exactly what led to last Tuesday’s fatal shooting, reports CBS News correspondent Errol Barnett.

The body cam video appears to have started recording late, lacking audio for the first 24 seconds. Barnett asked Maj. Steve Willis to demonstrate how a manual recording is initiated.

“When an officer decides that he wants to do a recording, he’ll double tap this big center button here, and the camera will begin recording,” Willis said.

Body cameras are new to Charlotte police. In 2015, the city spent $7 million implementing 1,400 cameras. But Willis said tactical teams, like most of the officers on scene at Scott’s shooting, don’t wear the gear.

Witnesses and Scott’s family deny or say it’s unclear if the 43-year-old had a gun.

CBS affiliate station WBTV reports that the gun recovered at the scene was stolen by someone else and sold to Scott. Past incidents show the 43-year-old had a history with firearms.

In 2005, Scott did prison time in Texas after shooting a man. And last October, Scott’s wife, Rakeyia, filed for a protective order, accusing him of threatening her “with his gun,” before dropping the request.

Still, despite the new questions about his history with weapons, Scott’s supporters say his record doesn’t change the way the deadly shooting unfolded.

Charlotte still remains on edge after a suspicious package forced the evacuation of the city’s police headquarters Tuesday. A bomb squad safely removed the package with a robot.

There are other videos that the police department has not released, but a new law removing dash and body cam videos from public record will go into effect Saturday – the same day Scott is expected to be buried.