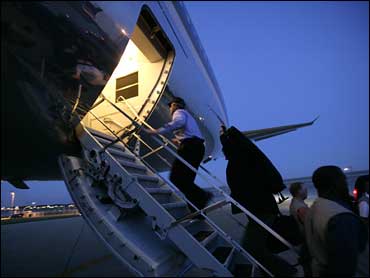 "I'm losing altitude — I'm going to read," President Bush announced to a Camp David after-dinner gathering that included several members of his administration, the nation's top intelligence officials and the chairman of the Joint Chiefs of Staff.

Vice President Dick Cheney was about the only one among them who knew that, by the time the rest of the group disbanded their get-together about 15 minutes later, a weary president would not be tucked safely into bed in his cabin at the mountain retreat but already on board a helicopter bound for Andrews Air Force Base and, eventually, Baghdad.

The president's surprise visit to Iraq on Tuesday, a sequel to an earlier one on Thanksgiving 2003, capped about a month of secretive planning.

Like the 2003 visit, this trip brought in "a very, very close circle of people" that included only a half-dozen of Mr. Bush's closest aides, White House counselor Dan Bartlett said. It also had the White House duping many others along the way, from some of the U.S. government's most senior officials, to reporters, the American public and even the Iraqi prime minister.

The trip was so secret that even the head of the CIA, Michael Hayden, didn't know it was happening, and he was supposed to have breakfast with the president, reports CBS News chief White House correspondent Jim Axelrod.

The planning began after Mr. Bush directed his staff that he wanted to travel to Baghdad as soon as new Iraqi Prime Minister Nouri al-Maliki filled the final positions in his government. After that was accomplished last Thursday, the wheels were set in motion for the trip to take place.

CBS News correspondent Elizabeth Palmer reports the visit was meant to bolster the Iraqi government on the eve of a huge security crackdown — 75,000 Iraqi security forces and coalition troops are being deployed in the biggest military operation in the city since the invasion itself in 2003. The aim is to make Baghdad safe again by taking control of areas riddled with violent crime and sectarian killings.

A high-profile, two-day meeting on Iraq at Camp David was set up to conceal the real plan and provide a cover story to bring al-Maliki and his ministers to Baghdad's heavily fortified Green Zone. They were told they were needed there, at a former palace of deposed leader Saddam Hussein that now serves as the U.S. Embassy's quarters, to participate in a videoconference linking them with Mr. Bush and his advisers at Camp David.

Extending the ruse further, Mr. Bush's publicly released schedule for Tuesday even went so far as to state that he was holding a news conference in the White House's Rose Garden upon a mid-afternoon return from Camp David.

On Friday, a senior presidential aide had convened a background session to lay out for reporters the schedule and the agenda for the two days at the Maryland facility. Mr. Bush himself said the remote locale was chosen for the Iraq meetings "because it can be distracting down in Washington."

But close listeners may have heard a hint that something exceptional was in the works. "I think that will be a very interesting moment," the president said of U.S.-Iraqi videoconference.

Hardly Anyone Was In The Know

Apart from Cheney, the only Cabinet members notified in advance were Secretary of State Condoleezza Rice and Defense Secretary Donald H. Rumsfeld, Bartlett said. Mr. Bush was accompanied on his journey by just a handful of aides, including Bartlett, National Security Adviser Stephen Hadley, chief of staff Joshua Bolten, deputy chief of staff Joe Hagin, press secretary Tony Snow and a couple of others.

The secrecy was aided by the fact that Bolten and Hadley bunked in the same cabin with Cheney at Camp David. No one was about to question Cheney about Bolton's and Hadley's whereabouts or press him on whether anything was amiss when they failed to show up for a scheduled staff breakfast Tuesday morning.

The dozen-plus journalists who also traveled with the president were given a maximum of 24 hours' notice, and some much less — including a radio reporter who was told only a couple of hours ahead of time and had to scramble to make it from Camp David. The reporters were called to mysterious meetings at homes and coffee shops around Washington to learn of the travel and were asked to keep the plan secret even from spouses and editors. They were ordered to surrender cell phones and wireless e-mail devices before boarding Air Force One.

Al-Maliki wasn't even informed of the dramatic change in plans for the day until Mr. Bush had safely landed in the Green Zone and they were minutes away from their first in-person meeting.

Back at Camp David, administration figures who expected Mr. Bush to show up for breakfast Tuesday morning were instead told for the first time of the president's true whereabouts, Bartlett said. Among those in the group finding out not long before the rest of the world were some of the nation's top secret-keepers — National Intelligence Director John Negroponte and CIA Director Michael Hayden.

But in the end, the secret got away from the White House.

Mr. Bush was expected to be in Baghdad for a little more than five hours, and aides intended to keep the news under wraps for at least two of them. But word quickly slipped out locally and then spread around the globe.

Mr. Bush eschewed his usual distinctive olive-and-white helicopter for the after-dark flight Monday from Camp David to Andrews Air Force Base. Wearing a Navy baseball cap, dark pants and blue button-down shirt with no tie, he boarded Air Force One — parked in a semi-hidden spot far from its usual berth near the runway — by a small set of back stairs instead of making his traditional waving departure from the grander front jetway. The route took him past the press cabin.

"The POTUS is on board," Mr. Bush called out, using a White House abbreviation for President of the United States.

The enormous jet departed just after 9 p.m. EDT, landing 11 hours and one minute later — late afternoon local time — in hazy daylight in Baghdad, where the temperature was above 100 degrees. From the semi-deserted airstrip a good distance from Baghdad International Airport's main terminal where Air Force One touched down, a convoy of helicopters ferried Bush and his entourage to the Green Zone.

This was the part of the trip that officials had determined posed the greatest security risk for the president, as it took him over a city where violence and death are standard fare. Many members of Mr. Bush's entourage strapped on 25-pound flak jackets over their suits for the six-minute flight. It wasn't known whether the president was similarly attired.

Two airmen scanned the ground from machine-gun positions at windows on either side of their helicopter, while a third aimed his weapon from the rear. The choppers raced low over highways, homes, palm trees and mosques to avoid offering an easy target high in the sky. But while the president was exposed in daylight flying into the city, the return flight to the airport was to be at night, providing a higher measure of security.

Bartlett said the very tenuous security situation in Iraq, and particularly around violence-wracked Baghdad, required the extraordinary level of security and deception.

"Obviously when you're entering in a situation where the enemy is so active we have to be extra cautious," he said.