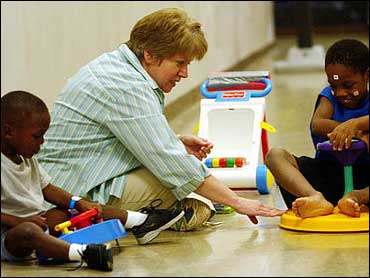 Brandon Roberts' 5-year-old son had just started adjusting to life as a kindergartner in New Orleans when Hurricane Katrina struck.

"It would have been his third week," said Roberts, who was enrolling his son at schools in Baton Rouge on Friday. "He was ready to go to school, backpacks, new uniforms, school shoes, folders, markers, basically everything they needed for school, all underwater."

Roberts hoped his son's return to school would create a sense of normalcy.

"They'll have to concentrate on their books, homework and lessons, instead of the water we walked through," he said.

The parents of an estimated 125,000 New Orleans children are fanning out across Louisiana and multiple other states, trying to find new homes and enroll their children in school. As those schools absorb all the new students, many of them also are hiring New Orleans' displaced teachers and school administrators.

The rush is on for everything from school uniforms to pencils. Principals are lugging furniture and offering hugs and tears to the homeless. Last week's teachers are this week's social workers, as Katrina strains schools in at least seven states.

"Last night we were movers," said Lynn Barnes, the principal at Briarmeadow Charter School in Houston, a city where 8,000 Louisiana students are expected. "Parents and teachers were taking trundle beds and tables up three flights of stairs. A family had walked into our door with a 2-month-old, a first-grader, a second-grader, Mom and Dad and nothing else."

Tens of thousands are expected to register in Louisiana schools beyond Katrina's reach and thousands more in other Gulf Coast states. Houston officials said 557 students had enrolled in just two days. By Friday, 1,000 kids had shown up in Shreveport, La.

Louisiana Department of Education officials are urging all state school districts to register students as quickly as they can, said communications director Meg Casper. They're also asking districts to hire all teachers and support staff who seek shelter in their areas.

With more students and more teachers, schools are trying to figure out how to pay for more textbooks and classrooms.

Schools are crucial in hurricane recovery, said Eugene Provenzo, a University of Miami education professor who wrote "In the Eye of Hurricane Andrew: Public Schools and the Rebuilding of Community."

Schools often provide initial emergency relief such as shelters, but over the longer term they also provide the continuity that children suddenly lack. School districts forced to take in evacuees must provide extra counseling for kids and even perks for teachers who take on the added load, he said.

Louisiana schools might end up handling the majority of the displaced students, but many other parents have taken their children to live out of state with relatives. Schools in South Carolina and Ohio have requested records on students.

Vince McCaskill, a spokesman for the Memphis, Tenn., school district, said Saturday that 350 displaced students already had enrolled there and that number was expected to swell to 1,000 Tuesday when schools reopened after the Labor Day holiday. "We're dealing with a massive population displacement, and it will be a challenge," he said.

The sense of loss is no different for displaced teachers.

Kim-Anh Nguyen, a first-grade teacher in Jefferson Parish, La., had just finished the first week of school when the hurricane hit. She's applying for a job in Baton Rouge.

"I spent a lot of time preparing for the school year, and now I have to start all over again and find a job," she said. "Being a teacher, you wonder what happened to your students."