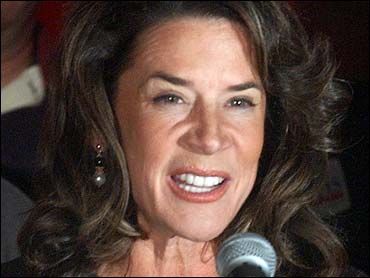 Republican Rep. Katherine Harris, who as Florida's secretary of state was both praised and vilified for her part in the 2000 presidential recount, said Tuesday she will run for the Senate next year against Democratic incumbent Bill Nelson.

Her announcement brings a major name to the race — along with the potential to attract huge infusions of cash from Republicans and Democrats alike because she is such a polarizing figure.

"The time has come to launch a campaign for the U.S. Senate," Harris told The Associated Press.

Harris, 48, is serving her second term in Congress. She is considered a top fundraiser and is a popular figure among Republicans.

But she is also despised by some Democrats for her role in overseeing the recount that ultimately gave Florida and the White House to George W. Bush over Al Gore. And her entry into the race could galvanize Democratic voters and contributors.

She considered running for the Senate last year after Democrat Bob Graham announced his retirement, but decided to sit it out. Republicans feared a Harris candidacy would produce a big turnout among angry Democrats and hurt President Bush's chances of carrying Florida and its crucial 27 electoral votes.

Harris' entry into the 2006 race should make it a lightning rod for money and national attention, analysts said. It also is expected to boost voter turnout in state that had 4.26 registered Democrats and 3.89 million registered Republicans as of October.

Nelson is considered a moderate with the ability to attract crossover voters. He has focused on issues including opposition to oil drilling off Florida's Gulf Coast and support of the space program — a priority of his ever since he rode aboard the shuttle Columbia in 1986, when he represented Florida in Congress.

Republicans have said they believe Nelson is beatable. An April poll of 1,044 likely voters from both parties showed 35 percent would like to see Nelson win a second term while 37 percent said they would prefer another person. He received approval from 50 percent of those polled, while 17 disapproved and a third didn't know.

"Sen. Nelson is very vulnerable and this race will continue to attract the attention of a lot of candidates for that reason," said National Republican Senatorial Committee spokesman Brian Nick. The committee "is committed to winning this seat and will put in the necessary resources to do so."

In 2000, while Harris was Florida secretary of state, Bush won a 537-vote victory over Gore after a dispute that went all the way to the U.S. Supreme Court. While Democrats accused Harris of partisanship in her handling of the recount, she became the darling of GOP activists and got elected to Congress in 2002.

In an interview with The Associated Press earlier this year, Harris said of her handling of the recount: "Every decision we made was totally based in law."