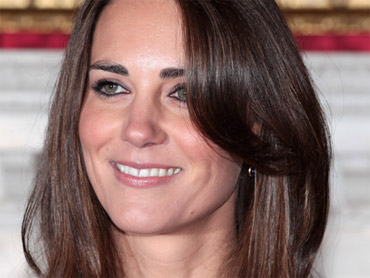 As England prepares for next spring's royal wedding all eyes are on bride-to-be Kate Middleton, soon to become Princess Katherine.

But what does it take to be a princess bride, and future queen?

A man who should know, Patrick Jephson, appeared on "The Early Show on Saturday Morning" from London.

Jephson was Princess Diana's private secretary for eight years and helped her prepare for the role of queen.

So what is Middleton going through right now?

Jephson said, "Well, she's told us that she's keen to learn the ropes of her new job. And, of course, she has a lot to learn. She's not just marrying a prince; she's marrying into this ancient, historic, and sometimes rather daunting organization, the British monarchy."

He added, "I can tell you Kate's been in (Buckingham Palace) this week, having a tour, getting a sense of the geography and meeting some of the key senior officials."

But beyond those meetings, what does she have to train for and do?

Jephson said, "Well, of course, what we expect of a modern princess, probably, who is someone who is going to be warm and spontaneous and friendly. But, of course, that depends on good organization backing it up.

"Kate will make her own choices about what sort of princess she wants to be. But, of course, it will help if she's disciplined and organized, and she'll have plenty of help to do the job properly."

Co-anchor Rebecca Jarvis asked, "So, maybe some even personality training in her future?"

Will she have to learn proper address and courtesy in a princess-like manner?

"Sounds funny, doesn't it? Almost like a fairy story," Jephson said. "But a monarchy is a hierarchy. Everybody has their place in the pecking order. And this is some laid down by the queen every few years. In fact the years I worked for Princess Diana on my desk a great big white piece of cardboard called, 'The Order of Precedence To Be Observed at Court.' This laid down everybody's place in the pecking order and, of course, Kate will have her place, too."

"I think 30 years ago, things were different," he said. "Diana was left very much to learn the ropes on her own and, of course, being the personality she was, strong personality with a strong sense of duty and commitment to her favorite causes, she got on and made the role her own and, in some ways, she made people in (Buckingham Palace) rather anxious, nervous at times, because she her own ideas about what she would do.

"Kate, I'm sure will have her own ideas but hopefully a rather more harmonious experience for her."