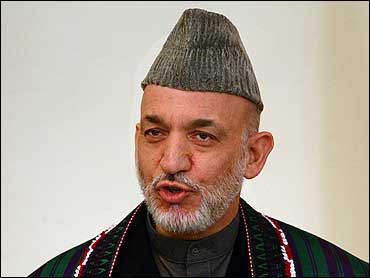 Afghanistan's president said on Saturday that the new U.S. strategy for the worsening conflict in his country is "better than expected".

President Hamid Karzai praised plans to strengthen Afghanistan's civilian and security institutions that are part of the strategy announced on Friday by U.S. President Barack Obama.

"This is better than we were expecting as a matter of fact, and we back it, and we hope to go for it to a full implementation," Karzai told reporters in Kabul.

President Obama's plan seeks to disrupt and defeat al Qaeda and its allies who have made a comeback since the fall of the Taliban in Afghanistan in 2001.

Many Taliban militants fled to Pakistan, where they have been launching cross-border attacks alongside al Qaeda.

Mr. Obama launched a fresh effort by sending in 4,000 more troops, hundreds of civilians and increased aid for a war that has lasted more than seven years and still has no end in sight.

The U.S. president also promised intensive diplomacy with Pakistan and Afghanistan and an unprecedented world outreach for help.

"I am in full agreement with the new strategy announced. It is exactly what the Afghan people were hoping for, and were seeking. Therefore, it has our full support and backing," Karzai said.

President Obama's strategy is built on an ambitious goal of boosting the Afghan army from 80,000 to 134,000 troops by 2011, and greatly increasing training by U.S. troops accompanying them, so the Afghan military can defeat Taliban insurgents and take control of the war.

Karzai embraced the additional help his country will get to train its army and police force.

Much of the security build-up in Afghanistan this year is meant to provide security for fair, stable elections there in August.

Will the plan succeed in a country that has been called "the graveyard of empires"?

Michael O'Hanlon, a senior fellow in foreign policy at the Brookings Institution in Washington, D.C., gave the plan a B-plus.

"First of all, it is a pretty good plan and focuses on protecting the Afghan population as a way to do counterterrorism, and that's the right way to think about this," O'Hanlon told Early Show anchor Erica Hill. "For too long we did not, so I'm generally happy.

"It probably doesn't do enough in that direction," he added. "The Afghan military and police are not going to be large enough. I think our thinking is, we'll do it incrementally bit-by-bit and make them bigger further down the road.

"It's better to be clear about the strategy up-front," O'Hanlon said. "The international development and economic effort is uncoordinated and there are 40 or so donor countries trying to do their thing, and the Afghan ministries they work with don't have the capacity to hear all that advice. You have to have a strong international coordinator, I believe, and we haven't seen that movement yet."

In terms of a timetable for withdrawing from Afghanistan, however, O'Hanlon said, "We're not going to be able to get out for three to five years at a minimum, in terms of the higher level of troops. We tried to shortcut under Mr. Rumsfeld and [it] didn't work. You have to protect the population and build up the Afghan institutions."

On the Pakistan front, O'Hanlon said he thought their military may need more help with counter-insurgency equipment and training in the northwest provinces where al Qaeda and Taliban threats are so great.

"So the plan's definitely moving in the right direction, but because the stakes are so high and it's going to be so hard to get this right, I prefer to focus on where I think it could be even better."

An upstate New York community is mourning a Marine killed in Afghanistan two months before he was to get married. 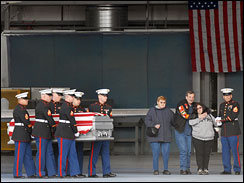 His flag-draped coffin was carried up the steps of St. Peter's Roman Catholic Church as bells pealed. Geary is being buried with full military honors.

He joined the Marines after graduating from high school. He was on was his second tour of duty, out of Camp Lejeune, N.C. His family says he wanted to sign on for a third tour. The first was in Iraq.

Geary planned to get married in May.