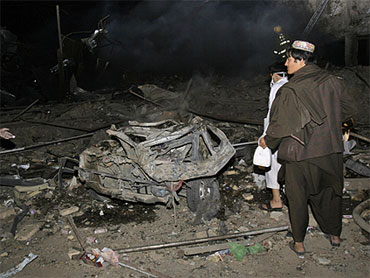 A wedding was called off because international troops killed the groom. A suicide bomber blew himself up in front of a police patrol. An old woman was beaten by the Taliban after she tried to stop them from taking her son.

And all of this happened in just two weeks in the same place - Kandahar.

The fight for Kandahar, Afghanistan's second largest city, shows some of the biggest hurdles faced by the U.S. as it tries to implement a strategy of winning over the ordinary people of Afghanistan.

Kandahar, a city of an estimated 800,000 people in the south, is an important piece in the battle for Afghanistan, and losing control of it would be a huge blow to the coalition.

The city - and the outlying province with the same name - will be a focus of the additional buildup of tens of thousands of troops which President Barack Obama is expected to order for Afghanistan.

Mr. Obama Tuesday vowed to "finish the job" in Afghanistan and said he'd announce his decision on increase American troop levels during a at West Point.

The president said he his war strategy.

By some accounts, including that of military officials, religious insurgents already control most of the 17 districts in Kandahar province. Kandahar was the headquarters of Taliban leader Mullah Omar, and the presence of Taliban there is growing.

The outgoing NATO commander for southern Afghanistan told The Associated Press that troops need to secure the exits and entrances to Kandahar city itself if the provincial capital is to be protected from infiltration and an eventual Taliban takeover.

"Will Kandahar fall? Every two or three weeks people tell me Kandahar will fall. I think the way forward is to secure the approaches to Kandahar city," said Dutch Maj. Gen. Mart C. De Kruif.

But the strength of the insurgents is only part of the problem. The other part is the local people's mistrust of the U.S. and the Afghan government with which it is partnered. Without trust, the residents cannot be counted on to tip off authorities to the militants' presence.

"Progress is hindered by the dual threat of a resilient insurgency and a crisis of confidence in the government and the international coalition," said Mr. Obama's top commander in Afghanistan, Gen. Stanley McChrystal, in an August report.

McChrystal, who is asking for thousands more soldiers, has warned that the war can be lost unless the U.S. and the Afghan government win back the trust and support of ordinary Afghans. But in Kandahar, the U.S. is fighting an overwhelming belief that the war is aimed at ethnic Pashtuns, who are the backbone of the Taliban and who dominate in the south and the east of the country where the insurgency and military action are fiercest.

"Why is it that all the killing is being done of Pashtuns? Not all Pashtuns are Taliban but that is what they (coalition) think. I am not government and I am not Taliban but I am suffering," says Naqib, whose cousin was shot and killed at the end of October when a NATO patrol fired at the car he was driving. Also killed in the incident were two women, and a 2-year-old child.

Naqib's cousin Habib Rahman was to have been married the next day. The two men - cousins, best friends and business partners - had decided to marry the same day. Naqib postponed his wedding and Habib's fiance "hasn't eaten since Habib's death. It is like she is dead too," he said earlier this month.

Officials said the incident is still under investigation.

But for 6-year-old Samina, who hid behind her father's arm, cracking tiny bubbles with her gum, the statistics meant little. Her mother was among those in the car that was killed.

"What do I tell my daughter? That life is better because the international troops are here?" asked Hajji Mohammed, her father.

Another hurdle is the lack of confidence of the people in their own government, and by extension the coalition.

"The government is more of a headache for us than the Taliban," said Lmar, interviewed in an office at the end of a long hall protected by armed men and closed circuit televisions.

After eight years and little sign of progress, the yawning chasm between Kandaharis and the international coalition has widened, with the Taliban outdistancing the coalition in the propaganda war for the hearts of the people.

A mark of the Taliban's propaganda success is a widespread belief here that a U.S. cruise missile caused last August's ferocious explosion that and flattened a city block in the heart of Kandahar, instead of the powerful truck bomb they planted.

"I would say 90 percent of people still believe it was a cruise missile. I blame the government and the international community for not moving faster, giving people information and showing them the proof that it was the Taliban," said Rangina Hamidi, an Afghan American woman who runs a small but thriving business employing more than 200 Afghan women.

Hamidi returned to her native Kandahar in 2003 to run a charity for Afghan woman that has since turned into a business with outlets in the United States as well as Kandahar. But she blames both the government and the international community for failing to deliver on promises of security and a better life when the Taliban were driven from the area in 2001.

Hamidi's husband Abdullah, an Afghan whom she met after returning to Afghanistan, had stayed in his homeland throughout the 1980s Russian invasion of Afghanistan, the civil war between rival mujahedeen groups that followed, and finally the repressive Taliban regime.

With each successive regime he held out hope for a better future, turning down an opportunity to travel to the United States in the 1990s. When the Taliban were thrown out, his hope soared. But now he just wants out of what he calls a mess.